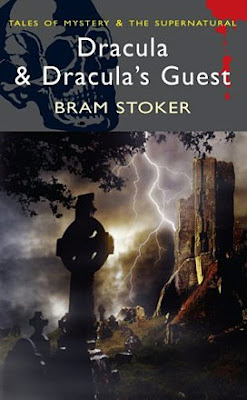 After this I promise to shut up about vampires for quite some time. It just occurred to me, when I reached the end of my first post on the subject, that I hadn't really broached the subject at all: just gone into the details of the various annotated editions of Dracula.

Then, when I got to the end of the second, I realised that while I'd discussed the mechanics of vampires and vampire-hunting, I hadn't even touched on why they appear to have this perennial appeal. I mean, it is rather odd, isn't it? Who would have thought that after Bram Stoker, after Dark Shadows, after Anne Rice, after True Blood even, that it would be Stephenie (sp.?) Meyer's Twilight series that went on to scoop the pool? I mean, one vampire's much the same as another, isn't it?

There are some pretty obvious points one can make about vampires up front (enough to explain their attraction for adolescents, at any rate):


They are, in short, the perfect teenagers. Oh, and they don't get pimples, either. Or have to worry about predatory creeps and stalkers. They are the creeps.

Ever since Stephen King gave it as his considered opinion that the film I Was a Teenage Werewolf (1957) was basically about acne, it's become clear that some primal human drive has to be behind any successful horror franchise. Fear of the vulnerability of sleep in A Nightmare on Elm Street; irritation at constantly being rebuked for bad table manners in various generations of zombie movies ... The points listed above might account for the appeal of the current, post-Buffy crop of vampire fictions, but what of those that preceded them?

If Dracula weren't considerably more than a tidied-up, reheated version of Varney the Vampire, I doubt we'd still be discussing it after so many years. There's a reason why Mary Shelley and Bram Stoker continue to rule the Gothic roost. Off the top of my head, I'd say that a good deal of Stoker's fascination with vampires comes from fear: fear of the mongrel, Eastern-European hordes - what at a later date might be called Eurotrash. I don't think it's a coincidence that there's so strong a resemblance between Count Orlock in Nosferatu and the evil predatory Jewish faces in Julius Streicher's Nazi propaganda rag Der Stürmer: 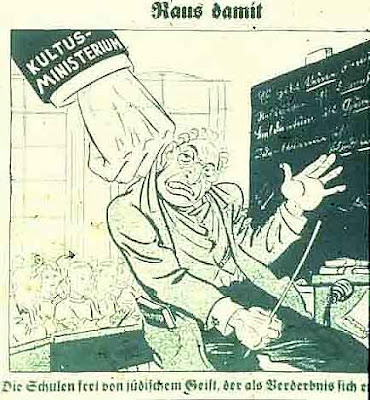 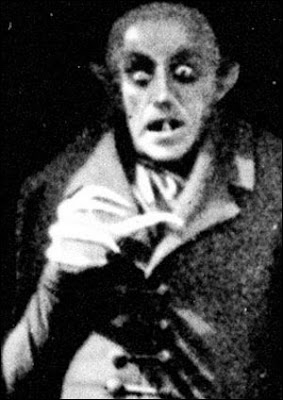 That isn't all, though. Stoker's morbid preoccupation with forbidden sexuality is umistakable in the novel: from the famous scene where Jonathan enjoys being toyed with by the vampire women, to Mina Harker's forcible seduction by the count, it's clear that the spirit of Freud was already abroad in the land, even before the 1899 publication of The Interpretation of Dreams.

Was Stoker a repressed homosexual? Was his strange career as Henry Irving's gofer and factotum in fact some kind of homoerotic love affair? It's hard to avoid the suspicion. Nor has the close resemblance between the mercurial Irving and the shapeshifting Count escaped the attention of commentators. The polymorphously perverse vampire of Stoker's imagination is clearly a fantasy figure on more levels than one: a lust-object almost perfectly poised between attraction and repulsion.

Stoker was no Edgar Rice Burroughs, though - no mere instinct-driven mouthpiece for the zeitgeist. One can continue to unpack his novels for items from the collective unconscious, but it's important always to remember how conscious an artist he was. The Jewel of Seven Stars (1943) is not just a rehash of Dracula with a vampire queen - it's an almost-equally complex masterpiece of horror fiction, playing as adroitly on the atmosphere of ancient Egyptian tombs as its predecessor does with castles in the Carpathians.

Take, for instance, the final piece in the jigsaw of Dracula: the short story entitled "Dracula's Guest," which first appeared in a posthumous collection of fugitive pieces in 1914: 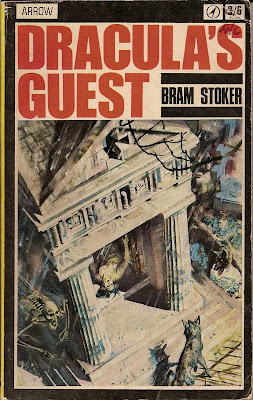 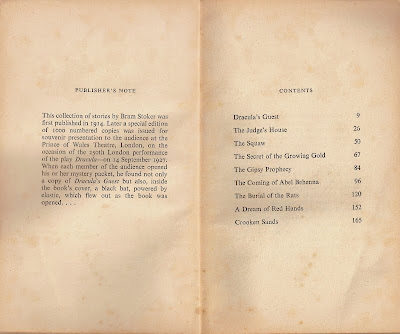 It might have started as a production gimmick - the black bat which leaped out when theatre-goers opened their programmes for the revival of the play Dracula - but you can see from the contents list above that many of the stories in this collection have gone on to become classics of the genre: "The Squaw" and "The Judge's House" perhaps even more than the title story. 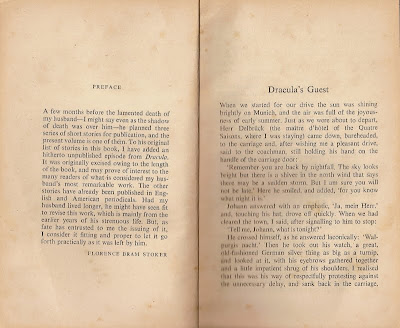 "To his original list of stories in this book, I have added an hitherto unpublished episode from Dracula. It was originally excised owing to the length of the book, and may prove of interest to the many readers of what is considered my husband's most remarkable work", wrote Stoker's widow in her preface to the original edition. That's putting it mildly! The arguments about his allegedly "excised" chapter of Dracula have hardly stopped from that time to this.

Is it really part of Dracula, to start with?

It didn't occur to Leonard Wolf to reprint it in the first edition of his Annotated Dracula (1975). The first commentators to include it were therefore Raymond McNally and Radu Florescu, in their Essential Dracula (1979): 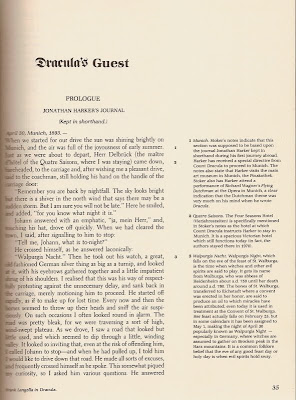 Their subtitle makes it clear that they regarded it as no more and no less than the missing "first chapter" of the novel. They accordingly placed it first in their book, before the narrative proper, and annotated it in much the same way as the rest of Stoker's text:

Stoker's then recently-rediscovered manuscript notes were used here (as elsewhere) to justify a good many assumptions on their part. Is this narrator really Jonathan Harker? The "episode" does seem unusually self-contained for a discrete chapter of a long novel. The parenthetical mentions of Wagner's Flying Dutchman and of Walpurgis Nacht (so familiar to readers of Goethe's Faust, or - for that matter - Gounod's opera) might seem to encrust it with almost too much significance for so early a moment in the story. 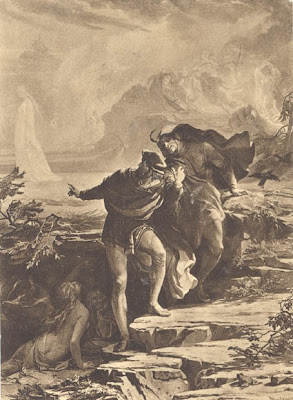 The next editor to include it was, predictably, Leonard Wolf, in his own Essential Dracula in 1993: 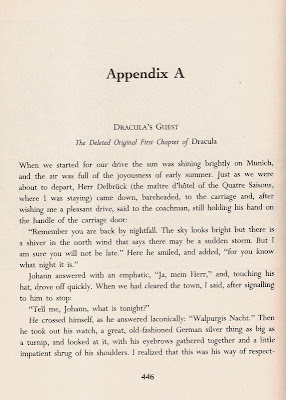 He includes it only as an appendix, though, and makes no attempt to annotate it in the same way as the rest of the novel. For him it's clearly an intriguing afterthought rather than an integral part of the story.

Which brings us up to 2008, and the indefatigable Leslie S. Klinger: 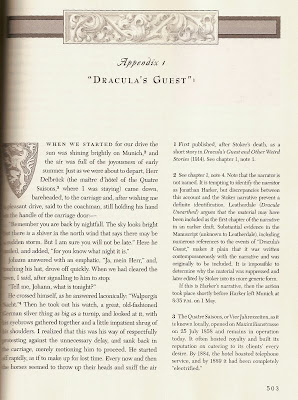 Characteristically, Klinger hedges his bets. It's included as an appendix, rather than as the first chapter of the text, but he annotates it as thoroughly as the rest of Stoker's novel. 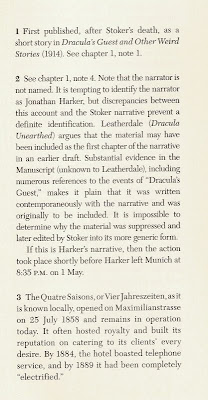 You'll note that there are the usual hints as to "uncertainties" surrounding Harker's narrative (possibly written to mask a quite different set of events). This is emphasised even more strongly in his notes on the end of the story: 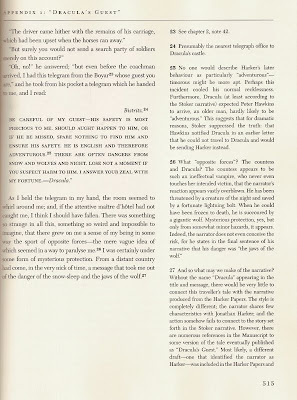 Is the wolf meant to be Dracula, then, or merely (as Klinger claims) an emissary of the still far-off Count? Who can say? The title "Dracula's Guest" would seem to imply his physical presence in the story, but there's still no way of knowing if this title was Stoker's or Florence's.

More to the point, is the mysterious female revenant whose tomb the narrator takes shelter in ("Countess Dolingen of Gratz / in Styria Sought / and found Death / 1801" with underneath "... graven in great Russian Letters: the dead travel fast") actually meant as a reference to Sheridan Le Fanu's immortal "Carmilla" (1872), as McNally & Radescu suggest: "a countess whose activities took place in Styria, southeastern Austria, and who had been laid out in just such a tomb as Stoker describes here" [p.40]?

The mysterious warnings, the suspicious peasantry, the great white wolf, the beautiful apparition ... one thing is certain, "Dracula's Guest" is a masterpiece of dread and growing suspense. Whether it was written at the same time as the rest of the novel and left out for reasons of length (or structural coherence), or whether it was redrafted and tidied up subsequently (as I must confess I suspect), it encapsulates all the strengths and haunting themes of Stoker's novel in one short compass.

It doesn't, finally, matter very much whether one considers it part of the story or not, it's a brilliant piece of work in itself. It should remind us how much we're all still in Bram Stoker's debt - or should I say his shadow?


As well as the stories in Dracula's Guest, you might like to check out some of those included in Peter Haining's useful compilation Shades of Dracula: 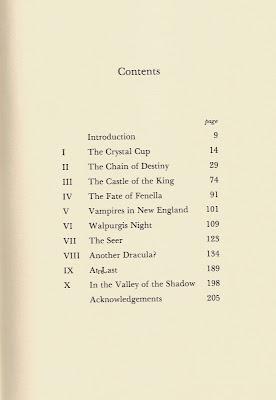 And here are some bibliographical details of the annotated editions which have served as the main focus of this discussion: 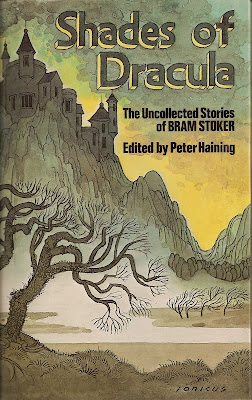 [Peter Haining: Shades of Dracula:
The Uncollected Stories of Bram Stoker (1982)]
Posted by Dr Jack Ross at 11:18 am

DO YOU WISH TO BE A VAMPIRE OR YOU WANT YOUR OWN POWERS AND PROTECTION COME AND BE AMONG THE VAMPIRES KINGDOM TODAY AND YOU GET WHAT EVER YOU NEED OKAY CONTACT LORD SHAKA AT ( lordshakavampirekingdom@gmail.com )
I turn to a vampire any time i want to. i become a vampire because of how people treat me, this world is a wicked world and not fair to any body. at the snack of my finger things are made happened. am now a powerful man and no one step on me without an apology goes free. i turn to human also at any time i want to. and am one of the most dreaded man in my country. i become a vampire through the help of my friend who introduce me into a vampire kingdom by given me their email. All thanks to Lord Shaka for your empowerment if you want to become a powerful vampire kindly contact the vampire kingdom on their EmaiL:(lordshakavampirekingdom@gmail.com )

Are you tired of being human, having talented brain turning to a vampire in a good posture in ten minutes, Do you want to have power and influence over others, To be charming and desirable, To have wealth, health, without delaying in a good human posture and becoming an immortal? If yes, these your chance. It's a world of vampire where life get easier,We have made so many persons vampires and have turned them rich, You will assured long life and prosperity, You shall be made to be very sensitive to mental alertness, Stronger and also very fast, You will not be restricted to walking at night only even at the very middle of broad day light you will be made to walk, This is an opportunity to have the human vampire virus to perform in a good posture. If you are interested contact us on Vampirelord7878@gmail.com