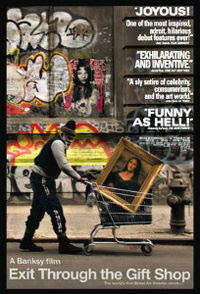 I have to say that it was quite some time before the question even occurred to me. I'd watched Banksy's movie twice, squirming with horror at the artistic crimes of his artistic alter-ego (and nemesis) Thierry Guetta, but the idea that the latter might be partially - or wholly - fictional, a mere hoax on the viewing public, didn't strike me until I saw it mentioned as a possibility in an article about something else.

I'd always prided myself on having a good nose for such things. Peter Jackson's famous 1995 mockumentary Forgotten Silver fooled me for about five minutes, I recall. Banksy's prank - if prank it is - is far more cunning than that one.

Once the idea's come up, though, it's extremely difficult to get it to go away. Could there really be a creature out there such as MBW [Mr Brain Wash], terrorising the "honest" world of the humble street artist? How much more likely it seems that "Thierry" is just an actor, a stooge set up to take a dive, a non-pompous way of starting a dialogue around that old perennial, "What is Art?"

There doesn't seem to be much of a concensus on the matter even so. There certainly does seem to have been a big "Mr Brain Wash" show in LA in 2008. But, then, when you think about it, what does that prove? I guess the main point is, if you think Mr Brain Wash's art is shallow, derivative shit, what exactly distinguishes it from the deliberately shallow satirical images plastered up by Bansky and his ilk? What makes one set of images look fresh and witty and the other set look tired and lame? 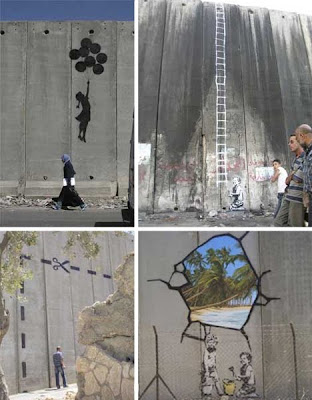 [Banksy: One Nation Under CCTV (2005)]
What makes good art good, in fact? Clearly a lot of people look at Banksy's stencils from the Left Bank wall in Israel as crude propaganda. Others would see them as frivolous aestheticism unworthy of their "serious" topic. And yet to me they seem clever and heartrending at the same time: designed to communicate a big message in big strokes, but unquestionably capable of eliciting the same query from everyone who looks at them: "What exactly do we think we're doing here?"

I don't know what makes good art good any more than anyone else. If I did I'd be out there making it instead of sitting here talking to you guys. Nor am I positive that I always know it when I see it. I think I'm seeing the real thing here, though.

In the end it really doesn't matter if Mr Brain Wash is real or not (I fear that the balance of probability has begun to swing to "not", for me). The Banksy documentary he inhabits seems to me every bit as original and daring as his West Bank mural project. The reason? Because each of us has a little bit of Mr Brain Wash sitting inside us: the complacent Mr No-Talent who thinks he or she can get away with imitating other people's (or even our own) inspiration and feel that's somehow good enough ("the audience laughed; I got paid"); the time-waster who fills the world with so much mediocre dreck that there's no room left for the real thing when it does happen along.

Where do you draw the line? That's the question Banksy's film is really asking. The line between Mr Brain Wash and Bansky himself, on the one hand: the "real" (albeit super-tricksy) artist and his simulacrum. On the other hand, the real possibility that we ourselves might chance on something really worth saying, versus that easier alternative of continuing to churn out pastiche and self-parody. The need, above all, to shut up from time to time on the chance there might be something there worth listening to.
•
I raised some of these issues a year or so ago in a post on Fakery. Since then I've come across another book on the subject, Melissa Katsoulis's Telling Tales: A History of Literary Hoaxes (London: Constable, 2009). Melissa includes no bibliography or set of references, and is - for the most part - content to tread the same old track through Chatterton, Ossian, William Henry Ireland, Ern Malley, and Helen Demidenko, but she's certainly dug out some striking new additions to the canon of fakes: some of the Oprah-endorsed "misery memoirs", for instance.

Th real question, though, remains: Is "Melissa Katsoulis" a real person? There's a striking lack of corroboration around the subject. The (huge) author's photograph on the inside back cover could really be anyone, and one is forced to ask the question why anyone would want to compile so essentially perfunctory and untheorised a chronicle of infamy under their own name ...

This fake book's fake cover is, in some ways, the wittiest part of the whole scam. "Melissa' (whoever she is - Andrew Motion? Nigella Lawson?) is certainly laughing all the way to the bank. Who's to say that half of those "roaring twenties" tricksters she's dug up are real in any case? What better camouflage for a trickster than making other tricksters into your subject matter?

I must get it out on dvd. I think I saw a cool photo of the Israel wall with ctrl+alt+dlt in huge letters. Was that Banksy?

I would imagine so. I haven't seen that particular one, but that's his general style.

Just last week I had occasion to reread Darren Tofts' masterly essay on 'Tlön, Uqbar, Orbis Terius' - without giving any of it away, it segues so well from your post. (It is paywalled here but no doubt you'll have easy access via your university.)

Also - citizen's editing, trash instead of publishing - "consensus", not "concensus".

It's rather funny to think of the term "easy access" being applied to any process associated with the University - one of our professors, no less, characterised our own particular bureaucratic model as follows: "to call it Byzantine would be to oversimplify it considerably ..."

I'll check out the essay, though. Thanks, Giovanni.

Late comment: it never once occurred to me while watching that film that Mr Brainwash could be real.

Approaching it as a character or figure (as you do here) rather than a piece of 'meta' art in itself (as I was obliged to) seems productive, though. I might have to go watch it again.

I guess I'm incorrigibly literal-minded in such matters. I suppose there are degrees of reality though, when you come to think of it: is there a (pre-existing) Thierry who's keen on filming things. Quite likely. Is there a monstrous "presence" called Mister Brain Wash. Well, yes, in a sense. Would there be if there'd never been a film? Probably not ...