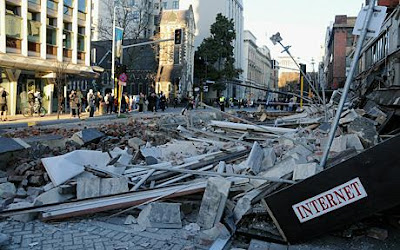 I've been reading an interesting book about old abandoned colonies and outposts of progress. In it, I came across the curious fact that most scientists in the seventeenth century were of the opinion that precious minerals (such as gold, silver and gems) were likely to be found closer to the surface in the tropics. Why? Because they'd been drawn up by the magnetic influence of the sun. It was, after all, well known that the fertility of the soil near the equator was also due to this quasi-sexual attraction between earth and sky.

I'm not quite sure what authority Ed Wright (author of Ghost Colonies: Failed Utopias, Forgotten Exiles and Abandoned Outposts of Empire. Sydney: Pier 9 Books, 2009) has for making this assertion. His book is a little short on referencing, nor is his bibliography much help. I do tend to believe him, though. It makes sense - stands to reason, in fact. It accords with what I understand of the theory of the Humours and the Great Chain of Being and all that good stuff. And, after all, it's not really that nonsensical, even with all we know today. The sun does exert an influence on the earth - it even affects the tides (though not as much as our much closer neighbour the moon does, of course).

However, most of us would probably dispute the idea that gold is more likely to be found in the tropics. What about the Klondike and the great Alaskan gold rush? What about the mineral deposits of Siberia, mined by so many hundreds of thousands of hapless Gulag prisoners? The reasons for ore and precious stones being further or nearer from the surface of the earth are many and various, and understanding them would probably involve at least some knowledge of geology, plate tectonics, and a number of other sciences. It's called "evidence". Without it you don't have a case.

Or, then again, you could just grab a bent stick or an old clothes hanger and go dowsing, now, couldn't you? You might even find something. It stands to reason. Doesn't it?

I'm no stranger to occultist mumbo-jumbo. It's a subject that interests me a good deal. I've probably read more books on pendulums and dowsing sticks and all the rest than most true believers. Far more than I should have, that's for sure. So don't take me as some wowser, determined to expunge the astrology column from the daily newspaper and to forbid fortune-telling in public places. But I do draw the line at the Moon Man, I'm afraid. 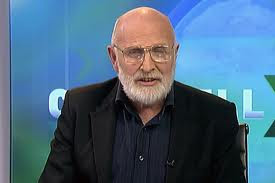 The Moon Man
Who's the Moon Man? Well, for those of you who don't reside anywhere near the earthquake-stricken city of Christchurch, his real name is Ken Ring, and over the past couple of weeks he's become a household name in New Zealand because of his (alleged) ability to predict seismic disturbances.

The facts appear to be (according to John Campbell, who's got into very hot water indeed for daring to dispute the oracle) that Ken Ring said, after last year's September earthquake in Christchurch (which he unfortunately failed to predict - by any laws of evidence except those of a card-carrying Ringian), that he felt the aftershocks would tail off by the end of November. They didn't. He then explained that he didn't mean little aftershocks, which had tailed off by November (they hadn't), but only big earthquakes which caused harm to people and property, and that there was at least one of them still to come. I don't quite get how all that follows, but let's let it ride. That big one would strike on or about the 20th of March 2011.

Now, since the seismologists studying the September quake had been saying all along that there was a strong possibility of at least one very large aftershock, which would not reach the magnitude of the original earthquake but which might cause considerable damage, this hardly seems very prescient. Especially as the big one, when it came, did not arrive on 20th of March, but almost a month before, on February 22nd. And, as predicted by the seismologists, it was almost a point lower on the Richter scale (albeit far closer to the surface, hence the far greater damage and loss of life caused by it). 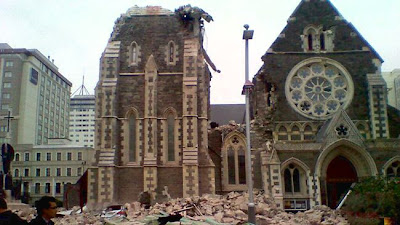 Christchurch Earthquake II (22/2/11)
Ken Ring's uncanny precision as a prophet tends to boil down, in practice, to generalised pronouncements that there's a greater risk of earthquakes and general seismic (or tidal) disturbances for roughly one week to either side of the new moon - and the full moon. As John Campbell pointed out, this covers the entire month.

As for his famous (or infamous) "Valentine's Day Tweet", in what sense does predicting a "potential earthquake time for the planet between 15th-25th" with a slight narrowing down of scope to "especially 18th for Christchurch, +/- about 3 days" for a city which had suffered three thousand or so aftershocks since September require any great acumen? And how does getting the day of the "big one" wrong (and not even within your scope of variation, albeit quite close to it) inspire such unreasoning awe?

The processes he uses to obtain such accuracy are rather shadowy, but - as Ring sagely remarked during the TV3 interview - nobody requires a tertiary degree of the Captain of the All Blacks, so why should he himself need one (or any scientific knowledge or credentials whatsoever) to act as an earthquake predictor?

Campbell certainly lost his cool during the interview. Wonder of wonders, it seems that he actually thought that offering untrained weathermen such as Ken Ring such excessive airtime to state their views (basically tantamount to astrology) was undesirable in the middle of a national emergency, with a frightened population ready to listen to anyone who offered them certainty.

Mind you, there's an obvious paradox here. As so many have already remarked, why offer Ring time on your own news programme if you don't think he should be given more free publicity? It's a fair point, and I suppose it might even be held to justify Campbell's abject on-air apology to Ring the day after their argument / interview.

What's truly fascinating to me, though, is the amount of response to the TV3 segment which concentrates on John Campbell's alleged "rudeness", and the paucity of any particular feelings of indignation at Ken Ring's sheer breathtaking chutzpah in using this appalling tragedy to boost his own profile and his own methods of predicting the future. Here's one fairly typical comment:

"JC acted like an arrogant opinionated jackass. What was meant to be an interview turned into John's personal vitriolic attack on Mr Ring's theory, interrupting and over talking Mr Ring every time he was trying to answer a question," said a commentator called Gareth on TV3's website.
- Stuff.co.nz

Note how Ken Ring gets the proud title "Mister" while John Campbell is reduced to a pair of initials ... "Mr Ring's theory" indeed! Campbell constructed his questions purely from quotes from Ken Ring's published writings. How "arrogant" and "opinionated" of him! If it's opinionated to think that the earth goes around the sun and that water flows downhill, then I fear I too am an arrogant round-earther. But pax vobiscum, Gareth, in any case. I can't help feeling that you're acting like a bit of a jackass yourself, but hey, since when did that become illegal in a free society?

Like Nostradamus, and so many other successful prophets before him, Ring has mastered the art of wrapping his pronouncements in the mistiest and most imprecise language, susceptible to almost any interpretation one wishes to put on them. In his particular case, though, it takes a pseudo-scientific form: plus / minus various arbitrary numbers of days; vague estimates of the type or magnitude of the event to be expected.

And, as we all know when we stop to think about it for a moment, if you make enough scattershot claims, over a long enough time, one of them is almost bound to come true - or kind of, anyway.

I'm happy to be schooled by any of you out there who are better informed. Can anyone quote an accurate prediction - i.e. one which was actually completely correct in terms of the exact day (not plus-minus three, five, or seven days either side), and exact type (not disturbance of a tidal nature = earthquake, high tide, unseasonable bird migration etc.) of event - made by Ken Ring, ever?

I may well be wrong, but the impression from here is:

I do think that John Campbell should be censured for allowing Ring on his programme in the first place, but I also believe that a bouquet would be a more appropriate response than the various brickbats he's been handed for his "bad manners" ever since. Ought one to be polite to timewasters like Ring at a time like this?

Watch the interview again, and note how Ring evades every one of Campbell's questions, how he constantly sidesteps every quoted example of erroneous reasoning or faulty mathematics. He relies on looking like a harmless, frightened old codger - and he may well be sincerely deluded into thinking that he can help. I can't help feeling dubious about the way he's succeeded in publicising himself at the expense of so many others' suffering, though. 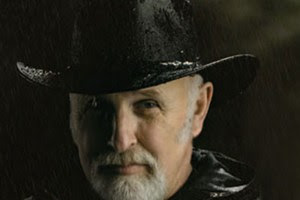 Ring in Rain
"Give Ken a fair go" say the comments on Redneck Central (otherwise known as the YahooXtra newssite). Oh, I know there'll always be another snake-oil salesman out there, whether he's called Cagliostro, Nostradamus, Anne Elk ("This is the theory that is mine") - or George W. Bush (remember those WMDs?). Don't waste your sympathy on them. The experts may well have got it wrong, but at least their evidence is out there in the open and susceptible to examination. Ken Ring and his ilk rely on trade secrets and invocations of the esoteric arts to obtain their results. Why? Because they know the moment they open up their boxes of tricks they'll be laughed out of town.
Posted by Dr Jack Ross at 9:43 am

So Ken Ring thinks that you don't need to study earthquakes scientifically or hold a degree in order to qualify as an expert. That may be so, however Ring's previous work experience as a clown for hire and crowd entertainer seems to be adequate qualifaction for his new job as a crank and snake oil salesman... "step right up"

My computer must have been logged in as Stefania when I left the above comment... the blame goes to me however, not her... John

I couldn't help noticing that it sounded rather more like you than Stefania ... The really useful thing, though, is that it gave me a link to her "inutili" blog, which looks very entertaining.