The Cricket in the Lecture Room 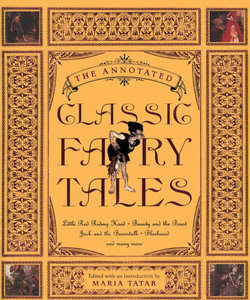 My colleague Mary Paul forwarded me this invitation to a public lecture at Auckland University the other day. I suppose I should try to get back on their mailing list myself, but so much random spam seems to come in every morning already that I no longer sign up to anything if I can help it. It does mean you sometimes miss out on hearing about quite interesting events, though:

Can fairy tales survive in the age of Kindle, Twitter, and Facebook? How have stories from times past, once told around the communal hearth, managed the transition into an age of electronic entertainments? Professor Tatar will turn to "Little Red Riding Hood" and "Bluebeard" to explore how tales with a whiff of the archaic have been revitalised with expressive intensity, even in cultural spaces that have been secularised and disenchanted.

Maria Tatar is the John L. Loeb Professor of Germanic Languages and Literatures at Harvard, where she chairs the Program in Folklore and Mythology and teaches courses in German Studies, Folklore, and Children's Literature.

I don't know quite what I expected of the event: something about the digital frontier, perhaps: video games and virtual reality worlds. It's a subject that interests me a good deal, as I think I've made clear in previous posts.

That wasn't quite what happened, though. 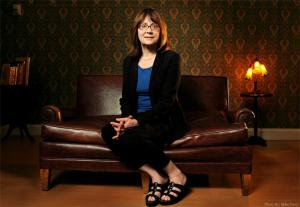 [Professor Maria Tatar]
The name "Maria Tatar" was not unfamiliar to me. I have a number of her books, not just the beautiful editions of "annotated" fairy tales she's been putting out through W. W. Norton (I've got the Classic Fairy Tales, the Brothers Grimm and Hans Andersen volumes), but also some of her more scholarly works.

Her analyses are not exactly world-shaking, but she's undoubtedly well-informed. She certainly makes a nice change from Jack Zipes, whose books used to dominate the field in the eighties and nineties of last century: his doctrinaire denunciations of patriarchal and bourgeois values now sound a bit quaint, curious relics of a revolution that never quite happened. Sometimes a little bit boring is not the worst thing to be.

[Red Riding Hood: The Movie (2011)]
So anyway, Bronwyn and I dutifully trooped into town and got to the university wildly early and sneaked into the lecture theatre with the film crew way ahead of time to make sure of getting good seats where we could actually see the speaker.

This seems a bit weird, in retrospect, as the room was only ever about half full, but we were motivated by having heard how Tariq Ali had packed out three whole lecture theatres a week or so before - his words of wisdom being beamed from auditorium to auditorium by video link. I suppose that fairy tale experts are somewhat less topical, but then we New Zealanders are such slaves to the overseas reputation ...

In any case, there we sat, two rows from the front, like a couple of nerds, notebooks and pens at the ready, as Maria and her Auckland Uni minders swept in to check out the room and test the sound system.

That's when I first saw the cricket. 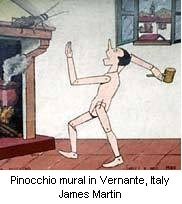 [Pinocchio kills the cricket]
I should explain that we were in one of the big lecture theatres under the university library, dug deep under ground, with no actual exits to the open air. The only way in and out was through the doors at the back - though there must be some service doors down at the front of the auditorium, since that's where it was.

Where he or she was, rather. I immediately conceived a fellow feeling for that cricket. He (or she) looked lost. And, really, one can hardly think of a worse place for a cricket to be than at the front of a concrete room full of hard-booted humans.

He was moving slowly, but with a certain determination, towards the podium, "as if he had something to say" (to quote from a poem by my old friend John O'Connor). Maria hadn't yet started to talk, but zero hour was imminent.

"Should we go down and rescue him?" muttered Bronwyn. (We generally know what the other one is thinking on these occasions).

"I don't think we've got time ... And what if he runs away?" I answered timorously. I guess I was afraid of being tackled to the ground by Auckland Uni security if I made what seemed like an unmotivated dash for the front of the room. Mainly, though, I didn't want to look like a fool in front of an entire audience of Auckland culture-vultures ... "Where would I take him, anyway?"

"You could carry him out to Albert Park," she persisted, but I think we both knew that it wasn't going to happen.

In any case, Misha Kavka had now stood up to make her introduction, and the event was underway ...

I hadn't seen the cricket for quite some time, so I'd begun to hope that he'd found some microscopic egress, invisible to mere humans. Now, though, he hove back into view, limping manfully past the podium in the opposite direction from the one he'd been going in before.

Maria was going on about how beautiful New Zealand was, how the air smelt so much better than the air in Boston, how friendly and welcoming everyone was (especially her hosts, whom she repeatedly invoked by name, as if to convince them that they really must have her to stay again ...)

After these polite opening noises, she swung into her real subject, which appeared to be (somewhat disappointingly) various recent literary and cinematic retellings of classical fairy tales - particularly Little Red Riding Hood.

From where I was sitting, to the right of the lectern, quite a bit of the stage was blocked from me, but now, suddenly, I saw the cricket again. Having traversed the room twice, first left, then right, he'd apparently decided that there was no escape this way. Instead he'd started on the long perilous journey to the exits at the back of the room, over all those leagues of carpet and dozens of stairs. He at least had the sense to cling to the wall, and it was there I saw him, climbing step after step, the little cricket that could.

Then he disappeared again. By now I'd lost any concentration I'd ever had for Maria Tatar's lecture (which was winding to a close, in any case). Instead I was lost in memories of singing, dancing Jiminy Cricket ("Always let your conscience be your guide") from the Disney version of Pinocchio ... In Carlo Collodi's original book there is a talking cricket, but it gets sconed by the terrifyingly amoral wooden puppet pretty early in the piece. It seems characteristic of contemporary sentimentality that his Disney avatar ended up as a kind of ubiquitous talking head for public service cartoons ...

As we filed out of the auditorium to the waiting "reception" (a bunch of tables laden with glasses of wine and nibbles, positioned to one side of the library foyer) I kept my eyes open for the cricket, but I couldn't see him.

"Let's get out of here," said Bronwyn. And that was that.

Kan Muftic: Her Scent
I think about that cricket sometimes. I hope he managed to get out too. But I suspect he didn't. 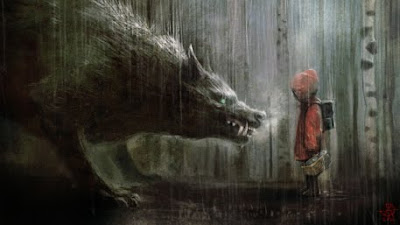 Manuel Augusto Dischinger Moura: The Wolf
Posted by Dr Jack Ross at 9:28 am

That was a strangely sad, yet hilarious cricket saga. I enjoyed it muchly.

Enjoyed your set of panoramic views from the window, also. So no chance of seeing you back at the university any time soon, I guess?

At the moment, I feel very: Jack Ross, Y U NO write good free summary?!

But then, I also know that when I saw Zipes give a lecture, huge chunks of my own attention were consumed by the fact that I was sitting on the floor and half crammed under someone's chair due to a seating shortage.

I located and rescued a cricket from my own kitchen about 4 weeks ago. If your one perished, then perhaps that may console you and Bronwyn.

They make a piercing and insistent noise and it took me ages to locate where it was coming from.

But your story attests to your immense courage (or at the very least, a valorous discretion), a deep sensitivity, and uncommon perspicacity. Confronted by a potentially lethal being that had clearly emerged from a real fairy story, you both remained quiet and academically calm...

However some disturbing questions remain unanswered in the contorted but rich weavings of this epic event you have revealed and regaled to us all...

...The cricket could well be, or have been, the sad ghost of some long lost long expired and tormented academic...

I guess you're both gesturing towards the fact that I gave so very little information about Maria Tatar's lecture. And, you know, I kind of agree with you both -- I don't think it was fair to her, since it was a very amusing and successful talk.

But then she is everywhere on the airwaves already, and beyond adding a couple of interesting new names to the "revisionist" fairytale writers we already knew about, it was hard to say at the end precisely what she had been suggesting overall ...

In other words, it was a fairly typical broad-brush public lecture by a visiting celeb. She understood what she was there to do, which was more to see and be seen than actually to say anything much. All power to her, but the cricket just scooped her, through no fault of hers.

I hope you're right about the transferable karma, Richard, though I have my doubts ...

Nope, I wish! I am too broke for the university life, sadly. Being an adult student is hard. Poverty doesn't suit! :)