Prints from a forgotten camera 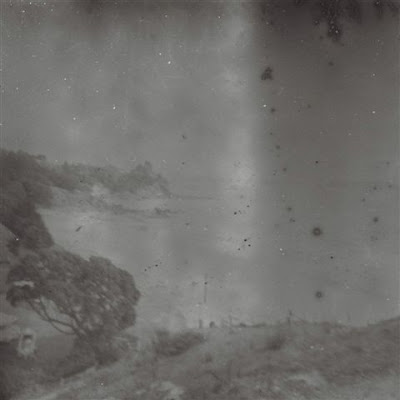 Headland and tree
(perhaps in the Mahurangi, where we owned a section in the seventies?)

Bronwyn was looking around the basement of my parents's house when she stumbled on an old disposable plastic camera from God knows when. My father promptly gave it to her, and my brother-in-law Greg, who likes old film equipment and stuff like that, took it in to be developed.

Here are the results. I have to say that I really like them a lot: the fact that one can only vaguely make out what's been photographed (let alone why) -- the uncertainty of era (we suspect mid to late 70s), or even geographical location. Some are clearly in New Zealand, others in Australia, but the ones with snow in them might even date from our family trip to Europe in 1981, for all I know ... 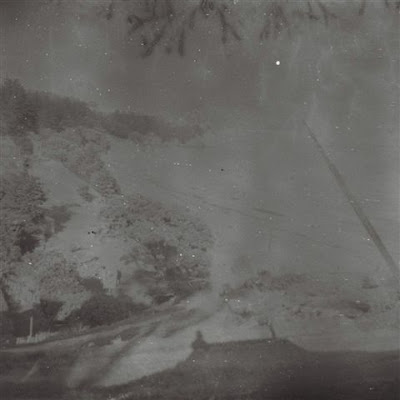 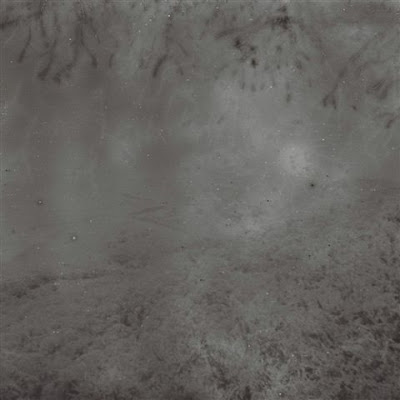 No idea.
But is that snow on the branches and off in the distance? 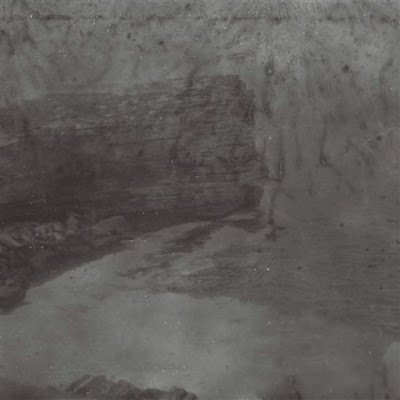 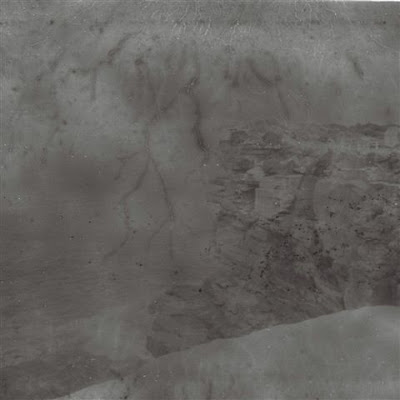 The same headland from above
(perhaps Browns Island, where we moored our boat on one occasion?) 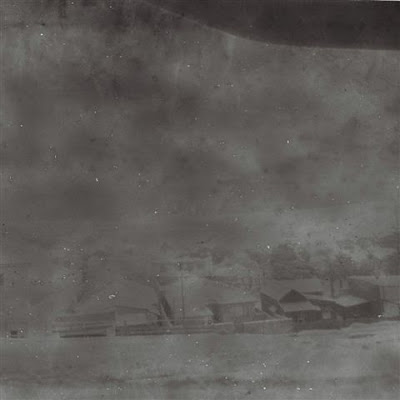 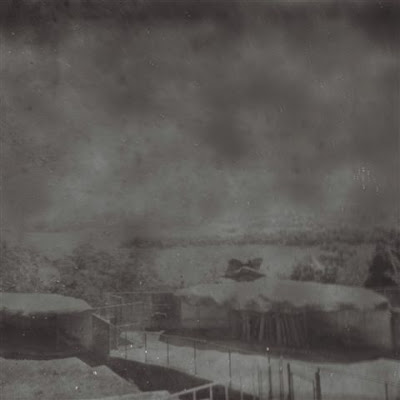 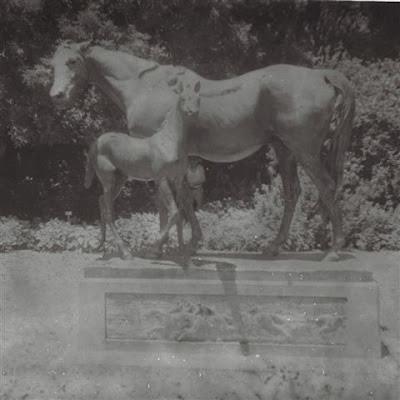 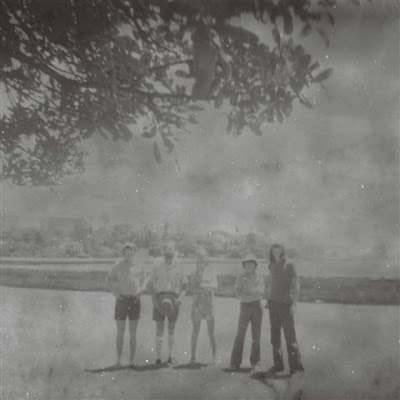 [from left to right: ]
my brother Jim, my father with the hat, my sister, me, my brother Ken ...
Presumably my mother is taking the photo 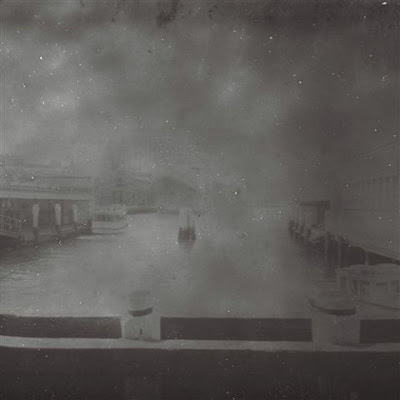 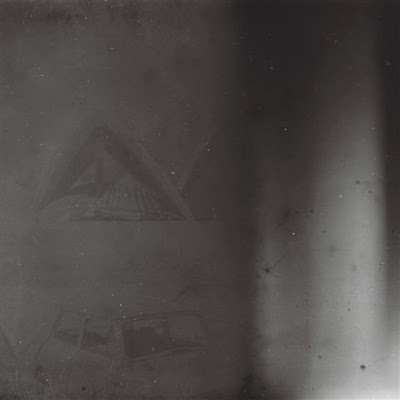 A little car in the foreground, and behind ...
surely those must be the spires of the Sydney Opera House?)
Posted by Dr Jack Ross at 11:07 am

I like these photos and the backstory too. Somehow it ties in with the previous post -- papers discovered in an old book and the process of trying to join the dots.

Yes, it's interesting how well they came out on the screen -- the prints looked almost entirely black, and the whole process seemed to have been a complete waste of time.

I must admit that I'm getting increasingly addicted to putting up images on this blog -- the long print posts don't really seem to attract readers any more (which is not meant critically, as I find myself nodding off after awhile when reading other people's online essays - John's excepted, of course, but then there aren't very many John Dolans in the universe ...)

I don't know, I think you probably have a lot more readers than you think. Quite often I've read something here that sticks in my head or that sparks all kinds of diverting associated ideas. But when I try to reduce said ideas to a comment they sound lame. And something like, "Wow cool article dude!" doesn't really do a polished literary essay justice. Maybe you should add a little hitchhiker's thumb at the bottom of each post?
Anyway, please don't stop writing the essays!!!

These are great Jack - they look like the results of some kind of geo-psychic seance.

My mother thinks that, while the first couple may be in New Zealand, all the rest are from our family trip to Sydney in 1972 -- she denies the existence of any "snow" on the roofs of that village -- and it's true that it would be a bit difficult to fit in chronologically ...

My mother writes in to say:

I think the film records a camping trip to the Mahurangi, and a family trip to Sydney when you were about 9 or 10. “Headland and tree” looks like Martins Bay, which we visited from Mahurangi, and the next one could be there, too. Your suggestion of snow is impossible, and there is no way our 1981 trip to Scotland could fit into this sequence of photos, which must have been about 1971 or 72 – and anyway, we were never there as a family in winter. The two rocky headland pictures look to me very like the Gap, that iconic suicide site in Sydney. I can’t identify the ‘village’, but I think the picture you have called “more snow, perhaps Polbain” is at Taronga Park Zoo, in Sydney. The mare and foal are indeed in the Sydney Botanical Gardens, the waterfront one very probably is Circular Quay, and the last one the Sydney Opera House.

Those displaced if not quite disembodied (impossible) snapshots from the camera Bronwyn found are fantastic, literally: that's the quality they have. What a prompt for a sequence of poems!

A bit like one of your 'found' novels too.

I just picked up another book by W.G.Sebald 'Austerlitz' one I haven't read. These photos reminded me of that. Or the book recalled me to these.

Read this post first when Scott Hamilton linked to it re forthcoming issue of "Brief" - I almost commented then, to say I found an old roll of film of my grandfather's a number of years ago, though many years after he'd died, that my husband sent to the international film lab. The pictures we got back were of me and my elder brother, 4 & 6 at the time, from which I'm planning a series of paintings. Sorry for the ramble - but it's a magical feeling, the sense of which I get from your post.

On a side note; I'm editing the blog carnival for this: http://newzealandgermany2012.wordpress.com/joiabout-2/

and I'd very much like to include your post on Scott of Antarctica as I think it fits well with the theme of Past Myth, Present Legend.

If you'd like it included please
feel free to email me at: nzgermany2012 [at] gmail [dot] com