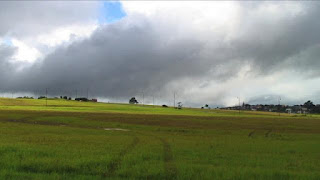 I'm very glad to report that my good friend Gabriel White's latest film will be included in the 2013 New Zealand International Film Festival, screening in the Academy Cinema on Monday 22nd July at 6.30 pm (or, alternatively, on Tuesday 23rd July at 1.00 pm). As well as having been in it - briefly, till the scenes I was in hit the cutting-room floor - I was also offered the privilege of a sneak preview. The piece I wrote in response (included below) might be interestingly contrasted with the more neutral prose of the festival programme. One thing we're all agreed on, though: "there’s beauty and eerie immanence lurking in the guarded blandness of Albany."

Go on, treat yourself! I think this film is at risk of becoming as defining for the far reaches of the haut North Shore as The Third Man was for post-war Vienna ... 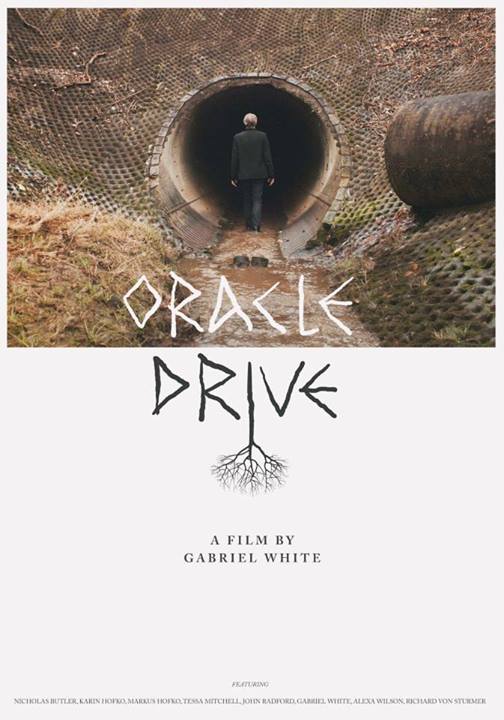 At first sight, nothing could look less sexy: the windswept industrial wasteland, the brute force of the cyclopean walls … and yet, as we continue to watch this small, black-clad figure wander through the strange suburbs and subdivisions of Auckland’s North Shore, the essentially mystical nature of his quest comes more and more into focus.

There are the same images of ubiquitous traffic, tawdry signage, and twee, half-hearted, corporate ornamentation familiar to viewers of Gabriel’s previous cityscapes: Tongdo Fantasia, Aucklantis, The Unplanned Masterpiece. This time, however, a new element has entered the picture: the oracular.

This is, in a sense, if not a religious movie, at least a movie about faith. The strange, brightly clad dancers emerging from portaloos, the hands groping from culverts, the levitating cars and ghostly buses seem entirely in keeping with the network of streetnames he has discovered: Atlantis, Isis, Oak, Nile, Tempo Place – Oracle Drive itself.

I must have driven past some of these spaces a thousand times, and yet Gabriel’s camera has found details that almost make sense of the sheer weirdness of this globalised Edge City, this suburbanised Industrial Area from hell. It isn’t hell, says Gabriel – rather, a new type of purgatory: a testing-ground for the spirit.

As his car glides on, with the droning monotony of the “Drive, Drive, Drive, down Oracle Drive” song insinuating itself ever deeper into our neural pathways, I think we start to realise this is where we live. We’d better start taking Gabriel’s tree-alphabets and Honda pyramids more seriously – like his Phoenix Palm mobile-network towers, it won’t be long before they’re the only vestige of the numinous remaining to us.

“God created Arrakis to train the faithful,” say the desert Fremen in Frank Herbert’s Dune. The same, it is now apparent, must be said of the marshy fields and desert wastes of Albany’s Megacentre.

There have now been quite a few reactions in the press to Gabriel's film (mostly extremely positive):

I have always wondered at this endless "critique" of suburbia, supposedly sterile or bad. I read some short stories by Ballard (noting your and Scott's enthusiasm for the latter) and in one story the whole world is a vast city! But I didn't feel that was so bad.

Some of the scenarios are indeed "dark" but the richness or not of people comes from inside them not really in where they live.

I love suburbs. (I like the country and beaches, although I am not so keen on such places these days). Overall I love being in a city, especially in suburb. I dislike the frenetic rushing around etc and sometimes the aggressiveness esp, encountered in say the CBD areas but I see nothing "bad" or lacking in spirit about suburbs.

In such suburbs, if people had better incomes, life would be good. I have lived in working class suburbs (Panmure, Ponsonby [when it WAS working class in the late 60s t early 70s])and also in Otara (a little South of it but also a working class area called Clover Park (it was great there), alter in "beautiful" Cockle Bay. I wasn't so keen on Cockle Bay, but I think it was what was in ME at the time.

I am not sure what Gabriel's "take" is (I like the films I have seen he has done and are on YouTube) but I cant agree generally with this naive (to me) critique of supposedly sterile suburbia. I love that there is a suburbia.

Sure the country can be beautiful, but I think it is somewhat the way we "master" nature that enables us to live rich lives away from the barbarity or so-called "nature" which in fact includes everything.

This leads me to comment on a common confusion - that "organic things" are somehow better. Many of the most terrible and dangerous chemicals are produced by "organic" beings (Toads - on their skin - for example) or snakes. Human beings, scientists, are only doing, in many cases, what animals and plants attempt to do.

Plastics are organic chemicals similar in generic structure to the base of most living things.

Water is an inorganic chemical. Fe is the centre pin of most animal blood. It is a metal. Chlorine is dangerous in high concentration but is essential as is sodium for (e.g.) nerve operation or water balance. Hydrochloric acid is in the stomachs of all human beings - it is NOT organic. Cu is the key pin of blood in Octopi etc and magnesium (inorganic) is absolutely essential as it is central to chlorophyll, which is essential to photosynthesis. A complex CHEMICAL process without which there would be no life on earth as we know it.

A city, then, is perhaps like the shell of an animal, neither good nor bad - just another phenomena or nature.

However, none of this proves or disproves the existence of God! I think such things can come from any place and are about the way one is or one perceives: such religious knowledge is the whatness of things rather than the surface. Maybe Gabriel knows all this! (There are of course aspects of cities that are not pleasant to say the least, and the "critique" maybe symbolic more of a kind of "alienation' or "spiritual sickness" - it is hard to talk of these things without resorting to cliche.

Well, there's a lot to digest in your comment, certainly, Richard. I'd say that Gabriel's film was less of a critique of suburbia and more an examination of its mysterious resonances and half-heard echoes of antiquity ...

Yes, I thought that Gabriel wasn't "commenting" on suburbia in that way but it was something that I thought "informs" the thinking of a lot of people.

But I have enjoyed all the videos I've seen done by Gabriel (including some on local history).

And yes, his thinking is more nuanced than where I was drifting.

I was generalizing I suppose. Undoubtedly I drifted off beam!

Thanks Jack and Richard. I suppose I could resort to that cliche word "ambivalence". Not in out of equivocation, more because I had and have opposing instincts or an attraction-repulsion to the landscape I made the film in, which for me is less a "bland" suburban one than a strange utilitarian geography on a grand scale. Is the film a critique of this landscape in some moral sense? I think I might have to confess that it is, because it's satirical and at times bluntly uncomplimentary. But in other ways it does observe it with affection and even admiration. Maybe I took on the landscape as an anti-hero. It certainly made me question myself. While I was making the film I did become more and more open to the place and it's potential, aware as I was of what we're calling its "blandness". I wouldn't like to make Albany the epitome or scapegoat for the blandness of everything else! For me it's just another wilderness to explore.

Oh and you ARE in the film Jack (circling). And are credited as an extra.

I was more or less musing out loud on Jack's Blog in the absence of any other comments hence my relatively inane ones! Inane I just noticed is very close to insane...

But I see where you are coming from.(Cliches have their place).

You could do a film about (at least one of (the)) VERY EXCITING AND IMPORTANT Richard Taylor(s) and EYELIGHT and some of the other Titus and say the "Brief" rogues. You could film straight onto to the screen of a computer or some other way...

Did you hear about the (proposed) Epic by Paul Janman and Scott Hamilton lately of (deepest) Atenisi were to film my place and incidentally have a quick dekko at VASTLY less interesting or important subjects (including PsychoticGeography) such as the history of Aotearoa, injustices etc and the wonders of towns such as Huntly vs. Puddingville where the LOTR films had their genesis...

If I don't (always) appear in person to see (or act in) the aforementioned films by you I have enjoyed those I've seen on YouTube.

Any chance of another viewing somewhere, or the film to be on sale at some point? I missed seeing it this evening and am unlikely to be able to see it during the day as I work full time. But VERY keen to see it somehow!

Hard to say, really. I'll certainly forward your query to Gabriel, though ...

We have no plans to re-screen the film at present. We're first trying to get it into some other festivals. Sorry about that. Will definitely spread the word when we do organise one.

We have no plans to re-screen as of yet sorry. We first have to try to get the film into some other festivals. Will keep you posted. G

The first unequivocally negative review of the film!

Thanks heaps for following up, much appreciated! Will keep an eye out for it appearing somewhere else.

I've passed on your message to Gabriel. Fingers crossed for a future screening sometime!

a positive review of OD: http://gatherandhunt.co.nz/Stories/nziff-rr-oracle-drive