The True Story of the Novel (3): The Japanese Monogatari 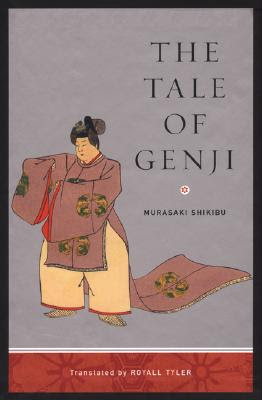 
Is this novel, the greatest in Japanese literature, sentimental? I suppose one might say so, though more in an eighteenth-century sense, where "sentimental" merely means something that evokes strong sentiments in a reader: feelings of pathos, for the most part (hence the equally devalued term "pathetic").

In Japan it's called mono no aware:


literally "the pathos of things" ... also translated as "an empathy toward things", or "a sensitivity to ephemera" ... a term for the awareness of impermanence ... or transience of things, and a gentle sadness (or wistfulness) at their passing.

The wikipedia article on the subject goes on to specify:


The term was coined in the 18th century by the Edo period Japanese cultural scholar Motoori Norinaga and was originally a concept used in his literary criticism of The Tale of Genji, later applied to other seminal Japanese works including the Man'yōshū.

I suppose that it all comes down to that Virgilian tag lacrimae rerum [the sorrow - literally "tears" - of things]. Virgil's Aeneas sees a painting of the fall of Troy shortly after being shipwrecked on the coast of Africa, and rejoices at this proof that the inhabitants of the new land feel "the pity of things" [Aeneid, I: 461-2]:

[... Here, too, the praiseworthy has its rewards;
there are tears for things and mortal things touch the mind.] 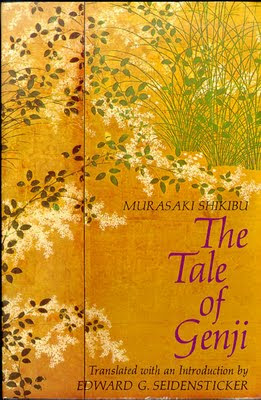 
The first time I picked up a copy of The Tale of Genji was in Scotland in 1981: in a little bookshop in St. Andrews, if I remember rightly. It was a Penguin edition of Edward Seidensticker's translation (still my favourite - possibly for that reason), and I could see at once that it was a very strange world I was entering.

Virtually everything seemed drenched in tears most of the time: pieces of writing paper with wistful verses on them, the silk sleeves of kimonos, the pillows they all propped themselves on. Nothing much seemed to happen, except long conversations through screens about the precise nature of one's feelings for shadowy lovers whom most of the characters had never actually seen in daylight. 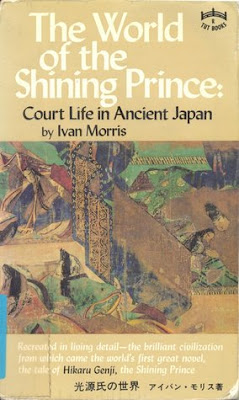 Ivan Morris: The World of the Shining Prince (1964)


It was, in fact, the "world of the shining prince" (one of the many epithets for the novel's central protagonist Genji). I read and reread Ivan Morris's book to get some insight into the complicated mores of Heian society, as well as some larger sense of the precedents for the Genji's complicated plotting and unrivalled psychological insight. And certainly there were Japanese novels and romances before Lady Murasaki's - just as there was blank verse drama before Shakespeare. But there's still no real way of accounting for a work of genius on this scale when it comes along.

While I certainly do recommend Morris's book (along with his various translations of other classic Heian works of literature: The Pillow Book of Sei Shōnagon (1967), and As I Crossed a Bridge of Dreams: Recollections of a Woman in Eleventh Century Japan (1971)), it's true to say that the real pioneering work here - for English readers, at any rate - was done by the amazing Arthur Waley, first complete translator of the Genji (1935) and partial translator of the Pillow Book (1928). 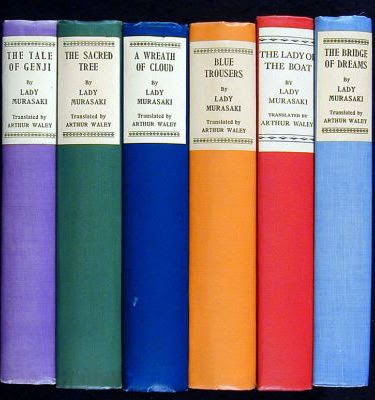 
A pioneer can't always get everything right, though - and there is a certain Proustian languour to Waley's Genji which is (apparently) not quite true to the original.

Or so says Edward Seidensticker. My favourite book about the Genji is definitely his translator's diary Genji Days. Among other things, it contains extensive reflections on the differences between his version and Waley's - and interesting comments, at one point, on the discovery that he's translated the same short poem completely differently in two different places! So allusive and complex is Heian Japanese that this, it seems, is quite easy to do.

It's the contextual detail which is most fascinating - and, in the final analysis, most rewarding, though. He writes about Yukio Mishima and his Sea of Fertility tetralogy; he talks of his last evening with Yasunari Kawabata, whom he also translated, just before the latter's suicide (which Seidensticker sees as a personal betrayal ... I'm still not quite sure why).

But it's this engagement with (then) contemporary Japanese literature which gives him his greatest insights into Lady Murasaki and her curious mixture of emotional realism and extreme intricacies of sentiment, I suspect. The sense of a continuum is strong, however hidden its details must remain to this linguistically ignorant foreigner. 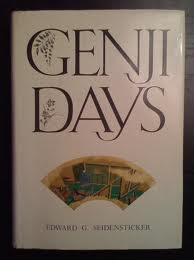 
I'd like to write more about this motley collection of books I've assembled in an attempt to put flesh on my ongoing obsession with The Tale of Genji. There's a famous passage in Murasaki's diary where she mentions a chance remark by the Emperor (she was a lady-in-waiting at court for at least part of her life) after some chapters from her work-in-progress were read out loud to him and his courtiers:


"She must have been reading the Chronicles of Japan."


This earned her the nickname "Our Lady of the Chronicles" - and she was accused of flaunting her learning by teaching the Empress Shōshi Chinese literature. The diary continues, "How utterly ridiculous! Would I, who hesitate to reveal my learning to my women at home, ever think of doing so at court?"

Nevertheless, it's interesting to note that the one obvious precedent for so coordinated and complex a piece of prose was immediately assumed to be a work of history rather than one of fiction: The Nihongi (listed below), rather than The Tales of Ise or the Tale of Flowering Fortunes ... 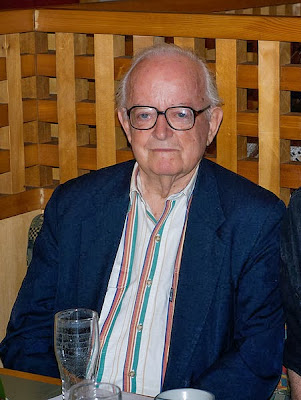 Heike Monogatari [The Tale of the Heike] (12th century) 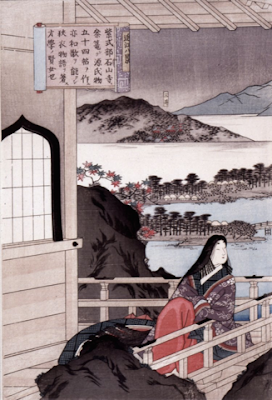 
The fact of the matter is, though, that I don't think anyone I've ever recommended the Genji to has succeeded in getting to the end. Which is a pity, as the end, the last 12 or so chapters (the so-called "Uji Chapters"), after the shining Genji has died and his rather futile nephew Kaoru has taken centre-stage, are probably the best and most original in the whole book.

Why is that? Is it just that the book is so long, and so little is happening most of the time except for people passing poems through screens and paying calls on one another? The same could be said of Henry James or Edith Wharton, and people read them.

Or do they? Whether I'm alone in having a taste for long, delicately phrased, poetic novels or not - and if I am, I have to say that I think I'm the clear winner in this competition: you just don't know what you're missing, as the middle-aged pervert Genji buys a young girl (the character known as Murasaki) and then raises her to be his perfect sexual companion: a situation Lady Murasaki treats as brutally and insightfully as Nabokov himself; or as Kaoru embodies the "superflous man": Goncharov's Oblomov or Lermontov's Hero of Our Time Pechorin 800 years before their time - whether I am or not, all I can say is that reading this novel over and over again, in each of the three complete English translations, has been one of the great experiences of my life.

You can find some notes on the latest translation of the Genji by Royall Tyler (who's recently completed one of the later, and to me far less approachable, Tale of Heike as well), here.

"A sad tale's best for winter," says the doomed child Mamillius in Shakespeare's late masterpiece The Winter's Tale. My father died just a month ago today. it's books like The Tale of Genji - in particular its revelation that here (as in other places) "there are tears for things and mortal things touch the mind" - that get you through at such times.

It's therefore hard for me to entertain seriously the suggestion that it isn't among the greatest novels ever written, perhaps the very greatest of all, but perhaps I'm wrong. Speaking strictly for myself (you understand), I'd trade a haybale of copies of Clarissa for just one of the Genji Monogatari ... 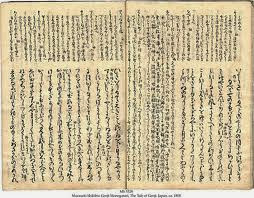 Thanks for the comment. I didn't so much forget, though, as (unfortunately) not happen to have a copy of this translation.

Luckily, I think it's included in Annie Shepley Omori & Kochi Doi's Diaries of Court Ladies of Old Japan (1935), listed above under "anthologies," albeit in a far less authoritative version.