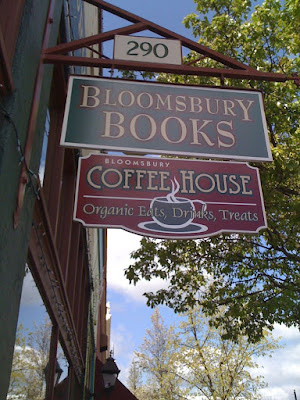 Bloomsbury Books (Ashland, Oregon)
[the Auckland version did not serve coffee – but it's where I found
a complete set of Child's English and Scottish Ballads ...]

It’s hard for me to walk through the central city any more without seeing the ghosts of lost bookshops on every side.

In Elliott Street, there’s the memory of Vintage Books, a beautiful little second-hand bookshop one floor up, in a building which was torn down and then built up again in the same place: not so much thin air, then, as the shadow of thin air. And yet I can still work my way down its aisles in my mind: poetry on the left – that’s where I found a two-volume joint edition of the works of sixteenth-century poets Giles and Phineas Fletcher one day – the central table for new books – that’s where I picked up a six-volume Everyman’s edition of Gibbon’s Decline and Fall of the Roman Empire a few moments before a man came panting in off the street and begged to buy it off me, explaining that he’d been looking for it for years. 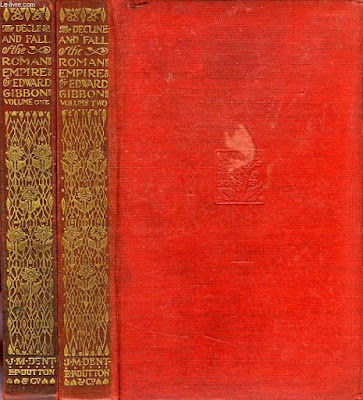 Edward Gibbon: The Decline and Fall of the Roman Empire

“So have I,” I replied curtly, planking down the $12 it cost on the counter. I’ve often thought how much better a person I’d be if I’d let him have the book that day. It was true, though. I had been looking for it for years. And I did start reading it as soon I got home. All the same, what a bastard! Not a bastard, perhaps: just a collector - with all the unscrupulous connotations that entails ... 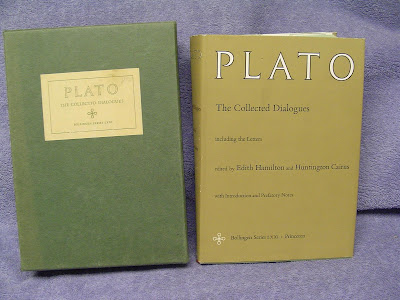 Further down, on Lorne Street, there’s the corner that used to be David Thomas’s Bookshop, where – among stacks of other tomes – I bought an old shop-soiled edition of Plato with a missing title page (which I still have) for $5. Opposite it, there are the second-floor rooms which housed Jason Books for a time. But the Jason Books I remember best was run by a man called Richard Poore, in a little cul-de-sac in High Street. 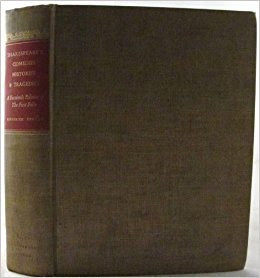 That’s where I found a facsimile edition of Shakespeare’s first folio lying face down on the floor, priced at $25 or so. It’s also where I discovered a scruffy old cardboard box full of large black books which turned out to be a complete set of Burton’s Arabian Nights, all sixteen volumes of it: ten devoted to the translation proper, six of the ‘Supplemental Nights.’ That one cost me $150, and even though I only really needed the last 6 volumes, I’ve always been grateful to the bookseller for not being willing to break up the set. It would have been complete madness to abandon the other ten volumes there in situ. I can see that now.

What’s left? There was a time, not so long ago, when one could start off at Downtown, then travel up Queen Street veering from second-hand bookshop to second-hand bookshop, all the way up to K Rd – beyond that, even: to Symonds Street and Allphee Books. Now virtually all those treasured landmarks have gone. They survive in the form of old bookmarks, leaved into odd volumes of my book collection.

There are a couple of exceptions. Anah Dunsheath’s Rare Books still has its premises on High Street, for the specialty trade, but for the most part it does its business online. Back in the day, when it was open more often, that was an essential stop on the way: not least for the discount tray nearest the street. It was in there that I bought my first copies of the strange, erudite, yet somehow maddening works of Frances Yates. 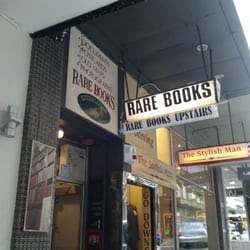 And then, of course, there's the new-look Jason Books. Maud Cahill, who runs it, has transformed it from the chaotic, dusty treasure trove it used to be into a highly organised, beautifully arranged showroom for both the rare and the rank-and-file among books: both (after all) are essential to the true bibilophile. 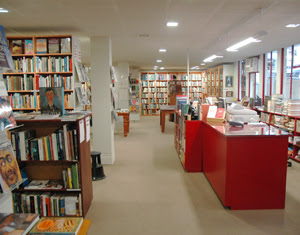 It now lives behind Freyberg Square, in O’Connell Street. It’s well worth looking through. Perhaps my most dazzling find there in recent years was the three volume edition of Emily Dickinson’s collected letters I’d been longing to own for so many years: ever since I first used to browse through its pages in the stacks of Auckland University Library, in fact. Maud has an amazing eye for such things: almost every time I go in there seems to be some mouthwatering treasure waiting for me.

The Letters of Emily Dickinson (1958)

Some other examples? Let’s see – Jeffrey Masson’s own annotated copy of the ten-volume Ocean of the Streams of Story (a first edition); Maurice Duggan’s copy of W. H. Auden’s T. S. Eliot Lectures: Secondary Worlds; Vladimir Nabokov’s exhaustive, eccentric four-volume translation and commentary on Pushkin’s Eugene Onegin … plus all of those biographies and history books and novels and other (generally Mylar-covered) objects of desire.

I wish I could still spend my days wandering through those lost bookshops, squandering my money on their flotsam and jetsam, but I think that they’re still there somewhere: certainly in memory, but maybe, also, in the realm of the Platonic archetypes, waiting to lure me in again – Bloomsbury, Vintage, David Thomas: and all the 'new' bookshops that have gone, too: Borders, Dymocks, Parsons.

It’s best to be thankful for what you have, though. I feel very grateful for Jason Books - and, just down the street from it, for Unity Books, too. Long may they flourish. 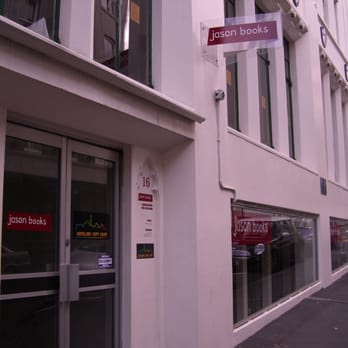 Jack added to those book shops there is Dominion Books in Jervois Road Herne Bay where once looking for 'In Parenthesis' by David Jones I knocked the books and it fell off the shelf at my feet. Also a few years ago I got I think a complete of Holderlin's poetry. But there is a lot of interesting stuff there. And there is still the Hard to Find I Think although I think they are embattled. Jason books was and is good. I know Richard as I played chess with him at the North Shore Chess Cub in the 80s. His interests included mathematics but he also had a complete facsimile of Blake's works engraved. I have only two books (the complete work was about $1000) with facsimiles. I prefer reading Blake with the coloured writing etc...Although I also noticed that Blake's picture of tiger, for 'Tyger' is rather more like a soft children's toy...but otherwise it is great. I also recall that Thomas bookshop, it shut down when the rents were put up but Richard had a lawyer and an assessor in and I think they held the rent. Anna Dunsheath (I sold one or two books to her and bought 'The Shorter Oxford' from her') is also an artist. If you google her there are two, the same person, but one is her as an artist and the other as a book person.

The Second Hand bookshop does seem to be under pressure. There was also Stratford Books, although I didn't ever go there.

You were cruel re that book the other guy wanted! But it is all in the game...

It was only in the 90s that I realised there were second hand book shops as such. I mostly either borrowed library books or bought them new. The present predicament arose after I worked for Ron Riddell and also when was toying at one stage with doing an MA in literature. Since about 1990 and especially 1994 I have increasingly got either into selling online or buying for myself or resale. I have stopped selling books though.

There is another bookshop in the middle of Ponsonby Road which is good.

But I also remember that the Hard to Find had a branch called 'Baxter and Mansfield' (where I failed to pick up but you did I believe the biography of Perec)....I believe there you might have picked up a complete (I don't think it has been completed actually) of Olson's 'Maximus' poems. I kept seeing it there. But there was a book shop in Howick where I picked up an almost complete of Olson-Creeley letters. It was very cheap as they knew nothing much about Olson and it was a bit prior to the internet days. There are some specialists on line. Some specialise in children's books and there are collectors of all kinds of things. All kinds of books.

McMurtry who won the Pulitzer for 'Lonesome Dove' wrote a book about his time in the book trade in the US and also as a collector himself. His bookshop in Texas somewhere had about 300,000 books. He had books he was looking for to sell to collectors in England etc. Book scouts used to come around. Those who took the trouble looking at the very bottom shelf had a special name. One of those found a couple of books of considerable value he knew he could sell quickly. The book scout presented them for purchase and McMurtry bought them off him! It helped him as he was able to onsell it and he had so many books the scout had found it for him, and the book scout got immediate cash.

That Frances Yates woman has a very large entry on Wikipedia. You got info for Giodorno Bruno etc from her I presume...and it is interesting she was in the Warburg Institute. The story of how Aby Warburg devoted his life to collecting books is fascinating: in 'The Library at Night' by Alberto Manguel. I ahve that and his book on the history of reading as well, as, get a load of this:

A book by a youngish man who reads dictionaries and collects words! He has been reading dictionaries since he was 10. He works as a furniture removal personage... He bought all 20 volumes of the OED (whose making I also read about, that's a fascinating story also). On getting the volumes he proceeded to read the entire dictionary: every word. (And he noted significant words). For him it is like or he likens reading such as vast sea of words, at times, to reading a novel. A vast, infinite work in fact.

You're so right about Dominion Books (which of course used to be on Dominion Rd when it was run by Mrs. Brazier, mother of Graham)!

And as well as Baxter & Mansfield there was also Evergreen Books in Devonport (which has now become "Bookmark" -- which used to be in Takapuna till a couple of years ago).

I think the other Ponsonby Rd shop is (or was) called "Classics and Such" -- Moa Hunter books was another good bookshop in Ponsonby (run by the artist Bryan Harold).

I was hoping that people would write in with more names to add to the somewhat truncated list above: I mainly stuck to shops in the CBD, because once you go outside that the memories grow just too complex and various.

Yes, Frances Yates was the source of virtually all my Giordano Bruno fixation. Though I have read a bit further around him since then. The Art of Memory remains a classic, though.