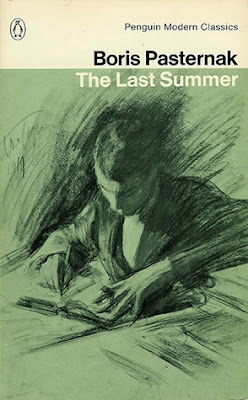 
I suppose that the most famous evocation of the last summer before the First World War is this beautiful lyrical novella by Russian poet Boris Pasternak:


... during the winter of 1916, Serezha visits his married sister. Tired after a long journey, he falls into a restless sleep and half-remembers, half-dreams the incidents of the last summer of peace before the First World War 'when life appeared to pay heed to individuals'. As tutor in a wealthy, unsettled Moscow household he focuses his intense romanticism on Mrs Arild, his employer's paid companion, while spending his nights with the prostitute Sashka.


I remember it was one of the very few pieces of fiction I've ever finished reading and then immediately restarted from the beginning. I felt I'd missed too much of the implications of what was going on in my blind pursuit of the story. And, much though I admire Doctor Zhivago, I have to say that I enjoyed The Last Summer, short though it is, far more.

As I was paging through all my old files of reviews for my new Opinions website (now substantially complete), I came across quite a few unpublished ones. In most cases this was only too explicable, but there did seem to be one or two which I thought might be worth resurrecting. You decide. One of them was of Robert Musil's famous much-referred-to-and-little-read novel The Man Without Qualities, which I must have been slogging my way through in mid 1998.

The reason it seems particularly significant to me now is that the whole immense novel is set in the year 1913, and one of the hero's main preoccupations throughout are the demands of a committee he belongs to whose job is to think of an appropriate way of commemorating the seventieth anniversary of the Emperor Franz Josef's accession to the throne of Austria-Hungary. When last heard of, the committee has settled on a suitable slogan for their celebrations: "Emperor of Peace" is to be the central motif.

I guess that none of you need me to tell you that by the year 1918, not only was stupid old Franz Josef safely dead and gone, but his entire empire and all it stood for was in ruins, and that any association between him and "peace" was somewhat belied by the frequent and brutal wars of repression he'd indulged in throughout his reign, from 1848 onwards ... There is something rather grand about the uselessness of it all, though: that committee solemnly deliberating as the clock ticks inexorably towards August, 1914.

I suppose that there's going to be no shortage of reminders of World War One over the next few years, as each ghastly anniversary of death and waste is reached, but I just couldn't resist reprinting my cheeky remarks about Musil's masterpiece here, just as I wrote them 15-odd years ago: 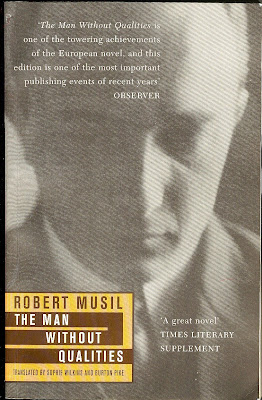 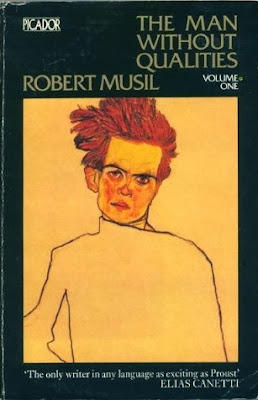 
Talking of blurbs, this one informs us that:


The Man Without Qualities is one of the towering achievements of the European novel, and this edition is one of the most important publishing events of recent years.

Well, you can’t say better than that. It goes on to trumpet:


the fully-fleshed arrival in English of the third member of the trinity in twentieth-century fiction, complementing Ulysses and The Remembrance of Things Past …

Fuck, better get reading, guys. Only, hang on a second – haven’t copies of The Man Without Qualities been thronging the shelves of second-hand bookshops for years, admittedly in three volumes rather than this one, imposing tome? (As Mad magazine once said: “In better stores in most cities; in lousier stores in all cities.”) Yes, but those were copies of the old translation, done from the old German edition. This is the new translation, done from the new (1978) German edition: Der Mann ohne Eigenschaften: Neu Edition, to be precise – not to be confused with the 1952 revised edition, or the 1930-43 first edition. 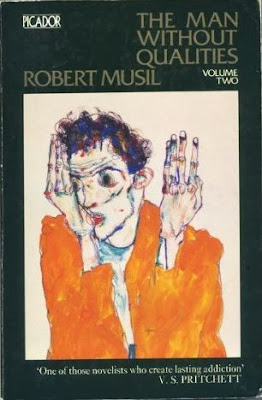 
What’s more, not only does this version have a funky new New York translator, it also has an “editorial consultant” (Is it his job to make the coffee? Or does he just sit in his office and wait to be consulted?) Enough of these cheap shots, though. You’ll be beginning to suspect that I haven’t read it through.

No, I have read the damned thing from cover to cover – call it my holiday project. I mean, I’ve heard that one before about novels on a par with Joyce’s Ulysses and Proust’s À la recherche du temps perdu – last time it was Andrei Bely’s Petersburg, from no less a person than Vladimir Nabokov. And it wasn’t true then either.

Musil’s master-work begins well enough. The first chapter of Part One: “A Sort of Introduction,” is entitled “From Which, Remarkably Enough, Nothing Develops,” and sure enough, nothing does. We are introduced to our hero, Ulrich, who has no qualities to speak of, but whose career bears a certain resemblance to that of his creator, Robert Musil. Both began as soldiers. Both quit: Ulrich to become a mathematician, Musil to become an engineer. Musil, however, wrote a bestselling novel, Young Törless, when he was only twenty-six, and subsequently fought with distinction in the First World War. Ulrich is caught forever in a kind of sabbatical from life. It is 1913, just before the balloon went up.

And what does he do with his time? Well, he has a mistress (this is Vienna, after all), and he is interested in a sex criminal called Moosbrugger, whom he sees as an alter-ego, and he has a variety of neurotic and over-educated friends. Most of it, though, he spends on a committee he’s been roped into, which is supposed to be thinking of an appropriate way of celebrating the Emperor Franz Josef’s 70th jubilee in 1918. “Emperor of Peace,” as they like to call him.

Yep, there could be something a mite symbolic there, I reckon. I mean, is this Franz Josef character ever going to reach the year 1918, I keep asking myself? I can’t tell you how many hundreds of pages are spent describing the committee’s deliberations (at least half the book – and it’s 1130 pages long. “That’s a big twinkie,” as the man said in Ghostbusters.)

Part Three: “Into the Millennium” (or “The Criminals”) starts off promisingly, on page 726. Even Musil seems to have had enough of the committee for the moment, so he bumps off Ulrich’s father and introduces a rather saucy sister, Agathe, whom we haven’t met before. And it turns out Ulrich hasn’t seen her for years either, and finds her … strangely fascinating. By page 936, after a few hot glances over a wooden table on a mountain walk, “it would have been as untrue to say that she was disinclined to enter into illicit relations with her brother as that she desired to.” Instead, Ulrich goes back to Vienna to lecture his mistress on polyglandular balance, but it’s not long (a mere forty pages) before Agathe comes to join him. You’d think after all that they might actually do it, but Ulrich’s far more interested in talking. And he was still talking a hundred and fifty pages later when the pen dropped from Musil’s stiff, dead fingers. The last words of the novel are:


It was only then that Ulrich learned that Agathe had suddenly said good-bye and left the house without him. She had left word that she had not wanted to disturb him.

No, I mean: “Emperor of peace.” That sort of shit is important, man.

There’s something rather sad about it, in retrospect. It must have seemed such a cool idea: Vienna on the verge of the First World War, the pseudorealities of the past contrasted with dawning modernity – a drifting, futile, intellectual simultaneously disenchanted and fascinated by the intricacies of a dying civilisation … Jeremy Irons for Ulrich?

And the beginning is pretty sharp. But the years went by, the Weimar republic fell, Hitler came to power – all of a sudden a novel about committee politics in 1913 began to look a bit out of touch. Musil halfheartedly introduced a few ethnic German ideologues halfway through as a contribution to world peace.

And the point? Well, of course the futile committee planning a jubilee for 1918 can be seen as a model for Musil’s own novel: an enterprise wildly overtaken by events, “modern” by the standards of fin-de-siècle Vienna, but surviving into the world of Finnegans Wake. It was never finished. It seems impossible that it ever could have been finished. The time for that was long past: about 1922, perhaps, when it would have made a nice companion piece to Thomas Mann’s Magic Mountain.

The terrible thing is that Musil could still have saved it all, if only he could have stopped his hero prosing on, pompously, interminably, as Rachel the maid slips off to sleep with Solomon, and frigid Clarisse gets madder and madder, and Moosbrugger languishes in his cell, and dear Agathe is driven, finally, to get religion rather than listen to any more.

A terrible warning to us all? You think so? Buy it. You won’t regret it. Trust me.

I can't promise that I won't put up further posts as we reach some of those other milestones on the road to the Armageddon of 1914-18. I'll try to be a bit more respectful next time, though, perhaps. Or maybe not ...

Jack I have the three Picador books (above withe interesting covers)*, but I started reading it from an Auck. library book. I found it strangely fascinating. I became interested in it as Martin Seymour-Smith waxed lyrical about it.

But I cant argue on your "cheekiness" as I didn't finish it.

Although I disagree about some of his (S-S's) other verdicts he is interesting.

Re other mammoth tomes. I loved the start of Proust's huge book but have never even been able to get all his books together in one uniform vol despite owning (part of?) Vol 1 for about 40 years! I loved the start of that for some reason...but it remains largely unread by myself.


I don't know that novel 'The Last Summer' by Pasternak but I liked the film Dr. Zhivago with Julie Christie when it came out but later I couldn't read the book itself. But that is interesting re his novella.

Some things I've read several times include Pincher Martin by Golding (twice), (much of Shakespeare), some of Ibsen's plays - I read almost all of them, 'Bleak House' by Dickens, and I re-reading 'Robinson Crusoe' (as I wanted to read 'Foe' by Coetzee, also I found an (unexpurgated) version of the film 'A Street Care Named Desire' (the best one with Brando and Vivian Leigh). I've read that play so many times and seen the movie a number of times.

One book I cant engage with is 'The Great Gatsby' although I think I read it three times: I'll try again!

I want to re-read all the Dickens and others (Conrad, Golding, Hugo, du Maupassant [but not the Romanticism-eroticism as I experienced it of Ryder-Haggard I read as a teenager] and others.

The best for the Yuletide and the New Year in case you don't Blog before those events.

*Ive read a few of Pritchett's stories but I also got hold of what I think are his complete essays. Pritchett is considered at least one of the great short story writers.