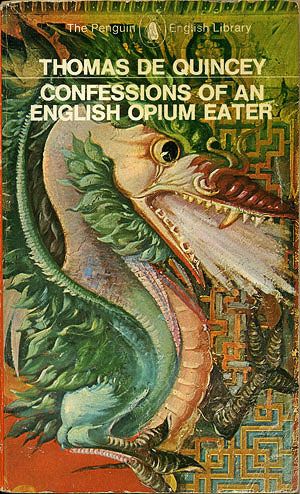 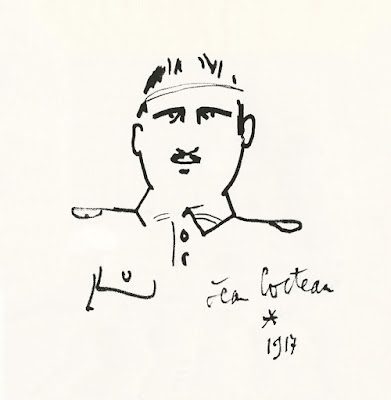 memories are hunting horns
whose sound dies softly in the wind 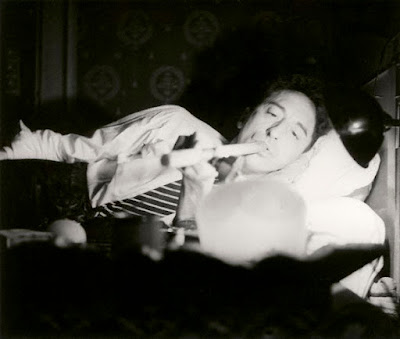 
It's easy to forget that Thomas De Quincey is as significant a figure for French readers as he is for English ones. In fact, like Edgar Allan Poe, one could argue that they admire him more than we do: his peculiar distinction perhaps appeals more to a European audience than an Anglo-Saxon one.

Be that as it may, De Quincey (rightly or wrongly) is famous for one thing, and one thing only: his Confessions of an English Opium-Eater, originally published anonymously in the London Magazine in September-October 1821, and then in book form (still anonymously) the following year. 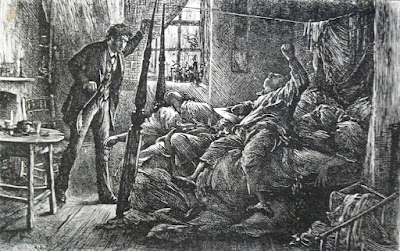 
I still remember the excitement in my house when my eldest brother finally bought a copy of the Confessions. It was a tiny World's Classics edition, and my other brother and myself were queued up to read it as soon as he finished it. It didn't take long. He said that the whole thing was totally boring, and mainly consisted of a long slanging match in which he denounced Coleridge as a mere dabbler and amateur in opium-consumption beside himself, with long computations of their respective consumption per day. There wasn't a single opium dream to be found in it, he concluded.

I had to acknowledge that he had a point when I did finally get my hands on the book. There was an awful lot of build-up before one got anywhere near the subject of opium, some of it autobiographical background, but most of it arguments with various critics, conducted with maximum pedantry and minimal good humour.

The whole thing, I concluded, was a swizz. Until I got my hands on a Penguin reprint of the first, 1822 edition, that is. Then I began to see what people had been talking about. Then, too, the strange and wistful figure of the young prostitute Ann (Apollinaire, possibly for personal reasons, misremembers it as Anne with an 'e') began to come into sharper focus. 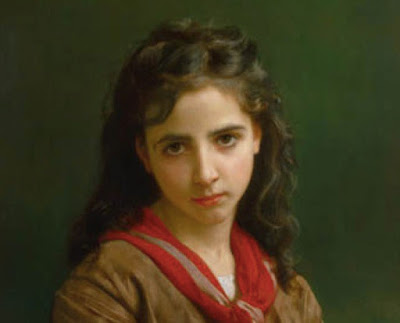 
De Quincey was always in debt. He wrote as rapidly as he could, for a variety of publications, essays and squibs which could be sold for just enough to stave off his creditors and keep his family alive for another day. (And then there was his opium habit to support, too).

The original two-part serial version of the Confessions had many deficiencies and lacunae (or so it seemed to him), few of which he was able to correct when it appeared in book form. He cherished the idea of a 'corrected' edition, where he would be able finally to do more than sketch the effect of opium on him, and on his half-erotic, half-idealised reveries.

That time finally came in the 1850s, when he was labouring away on a revised version of his essays and other works to date. It finally appeared, as Selections Grave and Gay from Writings Published and Unpublished by Thomas De Quincey (14 vols - Edinburgh: James Hogg, 1853-60).

This collection was initially prompted by an American edition - De Quincey's Writings (22 vols - Boston: Ticknor and Fields, 1851-59) - which reprinted the original periodical versions of each of the pieces. De Quincey, after initially contracting to supply them with revised copy, failed (not atypically) to reply to any subsequent letters, thus forcing the enterprising Yankees to rely on the resources to hand.

Unfortunately De Quincey in his sixties, beaten down by fate, poverty, and protracted drug-addiction was not really the man he'd been in his vigorous thirties. The additions he made to The English Opium-Eater - some of them quite valuable and interesting in their own right - had the unfortunate cumulative effect of completely masking the dramatic impact of the first version.

In many ways the American edition remains the better of the two, therefore.

This leaves readers with the insoluble paradox of which version to read. The 1821-22 text is definitely superior in terms of design, conciseness, and poetic effect. It's very seldom reprinted, however.

The 1856 text begins very badly, with De Quincey at his most argumentative and twaddly, but then goes on to sharpen and expand on many parts of the fascinating tale of his sojourn in London as a teenage runaway from school, the period in which he met the beautiful young fifteen-year-old prostitute Ann, whom he loved in the most childlike and innocent way possible - one reason why his book appealed so much to the Victorians, with their child fixation (and to love-sick poets, such as Apollinaire - and myself - ever since).

Ann! For many years after he reached manhood, De Quincey paced the streets trying to find her, but no trace of her was ever discovered. The romantic dream of her innocent beauty in the midst of the degradation of turn-of-the-century London remains the most powerful image in his book, transmuted though it is into various strange forms in the dreams recorded in the fascinating section "The Pleasures of Opium." 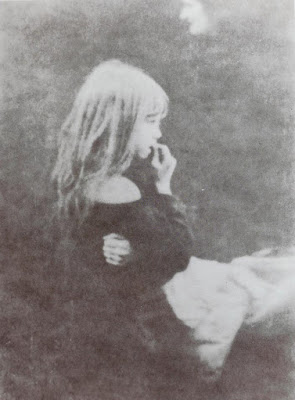 
The standard edition of De Quincey's Collected Writings, edited by David Masson in 1889-90, is forced to rely on the author's corrected texts for all the pieces originally included in Selections Grave and Gay (despite the undoubted superiority of some of the earlier texts). 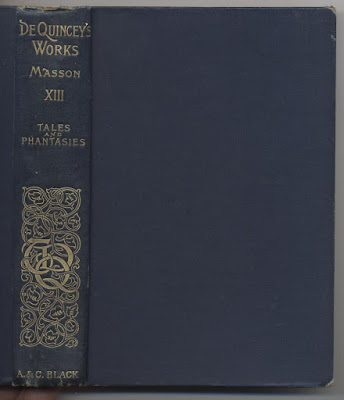 
For the most part this doesn't matter too much. For the Confessions, though, it does. Probably the best solution to date is that found by Malcolm Elwin in his 1956 MacDonald Illustrated Classics centennial edition, entitled Confessions of an English Opium-Eater in Both the Revised and the Original Texts, with its Sequels "Suspiria de Profundis" and "The English Mail-Coach". If you're fortunate enough to chance upon a copy of this, you're home and hosed (so to speak). 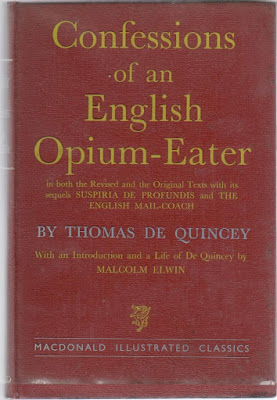 
Failing that, the Penguin Classics edition of the Confessions is probably the best. You do need both texts: that's the conundrum. But be sure to read the first version first. Otherwise you risk being turned off altogether by the querulous garrulity of an elderly invalid rather than the rapturous, demon-haunted landscapes of a romantic poet in prose.

In either case, you will soon be making the acquaintance of the doomed, tragic Ann, a romantic heroine on a par with Wordsworth's Lucy, Coleridge's Christabel, or Emily Brontë's Cathy Earnshaw. In this case, however, she may well have been real. 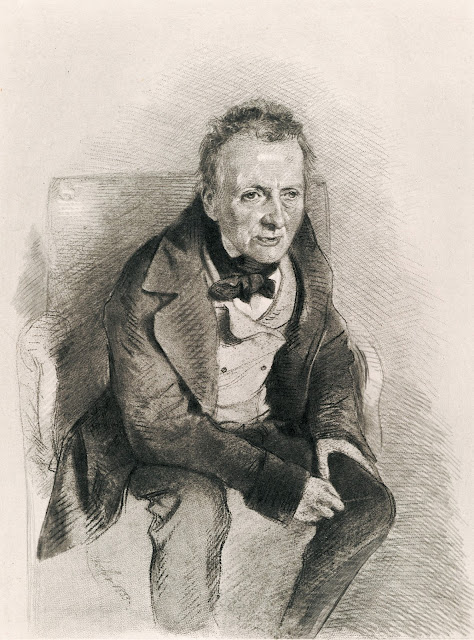 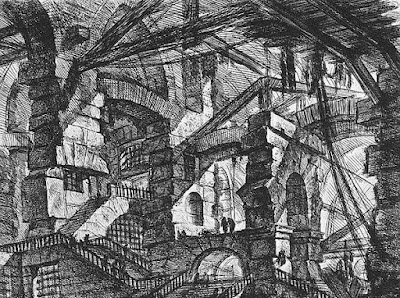 Interesting again as I made a point of getting a copy of this book. I think I had read 'The Confessions of a Justified Sinner' and (Father forgive me my sins I have the 1001 Books one must read! In any case I bought the Everyman edition which seemed very good. I read it in 2014. I recall Ann. It is rather haunting and sad. I was after the 'infinity' and the strangeness of his dreams. His life is interesting I thought and his reasons for leaving home.

Now I also, after having bought that,I found that among the books I once had for sale there was the edition you picture, the one with 'both the revised and Original Texts with its sequels SUSPIRA...' etc. I haven't read that copy. It has a longish life of De Quincey. I think I shall read this edition. The Confessions is quite long so I may not notice any difference but it certainly looks substantial.

This all reminds me as does the intro to the Everyman edition, that there are and even were in de Quincey's day, a lot of "Confessions" (Rousseau is only one I want to read). Also Hogg's dark novel is a great read. I recall more of it I think. In a longish story Alice Munro writes (partly) about Hogg.

But on the front end paper there is a name: Dave Ross written in largish writing.

Your brother, one of? I know of the younger I think he is, or is he the elder?

In any case, (tho I didn't think much about it when I read it the first time); it is a coincidence, something of which I think you are, I believe, considerably fond Jack!

No, I don't know any Dave Ross, Richard. My two elder brothers are called Jim and Ken, respectively.

Hogg's Confessions of a Justified Sinner is one of the greatest of all Gothic novels, I think. I didn't know about the Alice Munro story. Hogg is a fascinating character, though. I visited the memorial to him by a loch in Scotland more than once: "He taught the wandering waves to sing" was the inscription. Rather a bold claim, I thought at the time.

I think St. Augustine's Confessions were the prototype all others since have followed more or less. Rousseau certainly helped to make it an archetype of Romanticism, though.

I hope the holiday season is treating you kindly.

Well another coincidence of names. I read St. Augustine's Confessions. I have read it and enjoyed poetic disproofs (almost) of the existence of God. In so doing he writes some beautiful lines or ideas. Yes, he probably started the trend.

A hauntingly extreme example of a modern 'confessionalist' is Herve Guibert whose diary (The Mausoleum of Lovers) is very powerful, sometimes frightening because of his ideas (perhaps Artaudian). Hogg is also taking the idea of election to extremes.

But de Quincey is also a fascinating link. I must re-look at it. I was reading a few pages where he describes his desperate search for Ann. Dickens has a character who is an opium addict in his last book Edwin Drood. Perhaps he was influenced by de Quincey.

Yes, things are going well. I caught up with Olwyn, Yves and Renee Harrison and a few others. Renee is deep into his philosophy as is Olwyn of course. But a jolly time was had by all and I didn't drink alcohol at all. Nor did Victor. Others did.

Best for the season and the New Year!