The Imaginary Museum of Atlantis 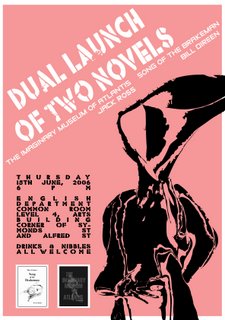 [poster design by James Fryer]
It's two days now since that strange booklaunch in the English Department common-room at Auckland University. I've always thought it a pretty odd space, even before the carpets were all dyed slaughterhouse purple. Once we'd turned off all the lights and arranged little lamps around the window-ledges, though, it turned into a kind of Orphic cavern: the temple of the mysteries.

I think there had been a film preview in there before we arrived, so there was still a huge white screen in the middle of the floor. We didn't dare to try and take it down without instructions, so it stayed there behind the podium with the speakers projected onto it, like the chained-up captives in Plato's parable of the cave.
Michele Leggott had kindly agreed to introduce the speakers, and did so valiantly despite having hardly enough light to make out her notes.

Scott Hamilton went first. He's already given a spirited account on is own blog of the talk he gave introducing Bill Direen's J. G. Ballardesque novel / Apocalyptic text Song of the Brakeman. Brett Cross of Titus Books (the publisher of both novels), comments about the reading Olwyn Stewart then went on to give from it, that "it got quite surreal and trancelike there for a while, with hazy music in the background, the low lights, and words tumbling over the top ... I don't think I'll ever get those nodules of Tyrian purple nosing out of thinning fur out of my mind ..."

Then came Gabriel White, introducing my book The Imaginary Museum of Atlantis. "Jack has a cold front," he said. "Jack puts his worst foot forward." He went on to compare me to Plato -- or Plato's more subversive side, at any rate. He sure got a laugh at that! I despair of doing justice to all the extravagant stuff Gabriel had to say -- it was a pretty goddamned impressive performance, though, I reckon (though I say it that shouldn't). For a video-clip of part of Gabriel's speech, click here.

The wine flowed freely and bread & cheese went down by bucketloads. Strange shapes loomed up in the semi-darkness, insisting on sharing their own views on Atlantis. "Perhaps some of their descendants are here in this room," speculated one poet. "Perhaps we're all Atlanteans," I riposted.

Andrew McCully's mood music was the other unique feature of the evening. He played on heroically as evening turned into night and the stars and citylights came on. He was still playing when I left. I hope he and all those others got safely home.

If you didn't manage to get there, I'm afraid that you missed an experience. Both books are now on sale, though, and can be ordered from the Titus website. I'll finish with some of the plaudits my own book has earned already:

"… after having read some of the contents, maybe it just wasn’t meant to be printed …"
– Marian Reeves, Massey Printery

I think that says it all, really. You owe it to yourself to check this novel out.
Posted by Dr Jack Ross at 10:10 am

Jack
You've been a busy boy! I think this is just the sort of thing blogs are meant for.
G

It does seem almost as if one is being welcomed into a fraternity, something like the Rosicrucians: The Brotherhood of the Rosy Blog ... greetings and felicitations right back at both of you.

Welcome to the blogosphere...