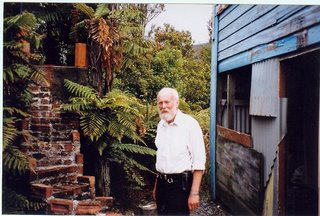 
Well, I’ve had some rather bad news. My friend Leicester Kyle is in extremis, with terminal cancer, at the Bone Marrow Unit of Christchurch Hospital. He’s elected to receive no further treatment for it, and his partner Carol circulated an email on the 18th of June warning his close friends and associates that he wasn’t long for this world.

As I write, a week later, they’re administering the Anglican last rites, or “final anointing.” David Howard – who was able to travel up from Dunedin to see Leicester one last time – just rang to tell me that, and also that he and I have been asked to be literary executors. I wish I could be there too. Writing this instead is, it seems, the best that I can do.


Leicester’s wife Miriel died of cancer, too, a year or so after we first met. It was at a poetry workshop in 1997, actually – rather an auspicious day: the day I met Lee Dowrick and Stu Bagby, also. We’ve been friends and allies ever since.

The first Leicester I knew, then, was the Auckland Leicester – the man who invariably went along to Poetry Live on K Rd and sat there looking avuncular with his long white beard and broad-brimmed leather hat, before standing up to read some wry and witty verses to the assembled hipsters.


After Miriel’s death I asked him if there was anything I could do for him, anything at all to make things easier. He said that there was one thing, rather a trivial thing – if I were to organise a regular gathering of friends, perhaps weekly or fortnightly, to talk about poetry, that might be a nice distraction.

Accordingly Richard Taylor, Scott Hamilton, Leicester and I began a semi-regular series of meetings in the London Bar, punctuated by visits from the likes of Hamish Dewe, Michael Arnold, Miriam Bellard, Kirsty and Andrew McCully, as well as the boys from evasion ... Those meetings still continue, at Galbraith’s tavern, under the nom-de-plume of the brief organising committee. Leicester got us onto a good thing.


Then Leicester left. He bought a house, sight unseen, in the tiny village of Millerton, in the hills above Westport, and drove off there in his red Land Rover. It seemed a bit of a leap in the dark. I felt quite worried about him at first. But when I heard he’d acquired a little cat called Cursor (because he kept pace with the lines every time you turned over a new page in a book), I thought he’d be all right. And he was.

I visited Leicester in Millerton three times. The first time, in 1998, I flew down for ten days. The second time was after escaping that vast melancholy mud hole called the Gathering at the turn of the millennium. The third time, a few years later, I drove over in a rental car with David Howard for a week or so.


The lines I’ve been quoting above are from a poem called “Tips on Stress from Seddonville” which I wrote during my first sojourn in Millerton. We drove over there to buy some coal, after trying rather unsuccessfully to dig some out of one of the exposed coal seams that criss-cross the region (it looked bona-fide enough, but belched out acrid smoke whenever we tried to burn it).

The Tavern is, it appears, quite famous. We had a beer there, and then tried to compose some poems in each other’s manner. After a while the proprietor came over and remarked that there were two types of weather in Seddonville – if you can’t see the hills, it’s raining; if you can see them, it’s about to rain. Then he turned on the rugby. No poetry-scribbling drifters for him!


This is the poem I wrote that day, called “Kylesque.” I’m sure it doesn’t do him justice, though it later appeared in one of Tony Chad’s anthologies under the title “City Face”, so it must have touched some kind of chord:


Told yesterday
I had a ‘city
face’

this morning
I spent
practising
before the glass

till I noticed
the espresso
had gone
cold

After a while, as Leicester became more and more of an iconic figure on the West Coast (mainly because of his intense involvement in the fight to save the local environment from strip mining), I began to feel that someone should compile an anthology of the various poems and tributes to him which had begun to appear all over the place. Virtually everyone who visited seemed to want to write a poem about Millerton and his strange, old-man-of-the-mountain role in the community.


Tony Chad, David Howard, Jeffrey Paparoa Holman, Jim Norcliffe are just some of the writers I know who went there and wanted to record something of the extraordinary nature of the place.

So what will I miss most about Leicester? His wry sense of humour, above all, I suppose. In the very last letter he wrote me, just six weeks ago, he offers one parting reflection: “it isn’t really true that the quality of a poem has anything much to do with the beauty of the reader” – a typically sly and offbeat reaction to my own moonings over girls.

Also, his unfailing courtesy. He was a gentleman in the deepest sense of the term. When I heard how ill he was, a couple of months ago, I sent him an advance copy of the Classic New Zealand Poets in Performance anthology that I’d edited for AUP with Jan Kemp. I thought he might like it, hearing again the voices of Curnow, Glover, Tuwhare and the rest reading their iconic poems. Even from a cancer ward he took the trouble to ring up and thank me.

I was out at the time, so he had to leave a message. Is it sentimental of me to have saved it, and to play it back again now? The voice is thin and breathless – a shadow of what he used to sound like – but it’s so recognisably him:

Message recorded Sunday June the 4th, 12.27 pm:
“Hello Jack, this is Leicester. Just ringing to thank you very much for the poetry book. I think it’s a real triumph. The poems are so well chosen, and it’s really good to read New Zealand poetry all keeping such good company. So very thoughtful of you, and I’m reading it with great pleasure. Bye.”

I guess that’s the last time I’ll hear his voice. There are a thousand more stories I could tell. Maybe I will tell some more of them later on, but for the moment I just want to put on record my love and respect for that wise and complex man – priest, poet, conservationist – the Reverend Leicester Kyle.
Posted by Dr Jack Ross at 9:38 am

thanks for that Jack, good to read about our mutual friend.i will miss him.

Is there any further news of Leicester?

He was of great signification in my life - a great man and poet - a man I held / hold in great esteem - of considerable dignity but much humour and humanity.

His scientifc interests - his interests in all of us. His great sense of life - his deep faith - his comic sense.

As with Raewyn, I will also miss - deeply miss Leicester - his person and his great poetry.

Leicester is still with us! Carol writes to say that he is now known as the Superman of the Bone Marrow unit, as his three days to live have grown into two weeks ... Clearly he's marching to his own drum once again, as so often before.

you mention Yves Harrison; hes still writing? where is he based now?

No idea about what Yves Harrison is up to now, actually. Perhaps Judith McNeil would know -- check out Poetry Live, Tuesdays at the Grand Central in Ponsonby ...

I could not resist commenting. Well written!