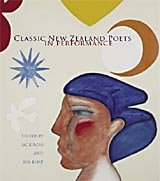 Well, yes, I am a teacher. I teach Academic and Creative writing at Massey University’s Auckland campus, and give lectures on NZ literature as well.

AUP asked me quite a while ago to write some teaching notes for the audio / text anthology which we launched on Thursday last week, so I thought it might be a good idea to put them up here for maximum accessibility.

I guess our desire all along was that the book could be used to promote awareness of NZ poetry in schools and tertiary institutions (though of course it’s priced to appeal to individual consumers as well).

Some of the teachers I’ve met have told me that they don’t quite know how to go about teaching poetry in their classes. Clearly I don’t have any magical panacea for that, but here are one or two suggestions:

Think of a theme or subject you’d like to discuss, and choose a poem (or, if you have time, poems) which deals with it in a way you think might interest your students.

I’ve compiled a thematic breakdown of all the poems in the anthology (and it took quite a wee while, too, so don’t wax too sarcastic at my expense. I know some of the categories are a bit suss):

Our book is arranged in chronological order of birthdates, beginning with Rex Fairburn in 1904 and ending with Brian Turner in 1944. (Some of the reviewers appear to think that this implies we believe that one has to be over sixty to be a “classic” poet, but I guess I’d see this as about as intelligent as attributing conscious bias to a librarian’s choice of Dewey decimal numbers. Chronology simply seemed to us the most convenient way of arranging the material. No-one’s yet claimed to find the book difficult to navigate.)

Another way of approaching a poetry class might be through region and locality. Why not get your class to talk about a poet who comes from where you live? The idea would be to get the students to consider the characteristics of their particular place: culture, physical features, lifestyle – even at some distance away in time. What are the continuities (and discontinuities) in your area?

Many of the poets in the book have associations with more than one region, but some (like Kendrick Smithyman or Brian Turner) are very strongly identified with a particular place, and constantly revisit it as subject-matter in their work.

When it comes to teaching the actual class, I would recommend beginning by introducing the poet, telling them some picturesque details about them, where they lived, what they liked to do (drink too much, in many cases, alas …) A lot of this information is available online, and I’ve tried to provide links where you can find a picture and discussion of each poet.

Hand out the text of the poem, then play them the recording.

Some of the poets, one has to admit, sound distinctly plummy and odd at this distance in time (Fairburn and Brasch, for example); others (such as Mason and Janet Frame) are quite vernacular and plain. You might tell your students that their own recorded voices will sound a bit strange in twenty or thirty years. Or else just let them laugh. After all, it’s not a crime. Some of them do come across as pretty weird, even to me.

The more they listen, though, the less attention they’ll pay to all that. The content of some of the poems (different ones for each person, I would imagine) is just too compelling to be ignored.

Make sure you go through what each poem means in literal terms. Are there any difficult words? Any allusions needing to be explained?

Try to elicit general reactions from the class. Do they like the poem? Does it interest them? Are there are other approaches to the material they’d prefer the writer to have used?

Write up the material generated by the discussion on the board, grouping it into a kind of mindmap of the various reactions (negative / positive; specific / general).

Depending on how much time you have, at this point you might want to get the class to try and write their own poems on the same theme (either individually or in groups). Get them to write them on posters and/ or read them out loud when they’ve finished.

Alternatively, if you have internet access in the classroom, you could get your students to research particular writers and find pictures and information about them.

The best place to begin would be at one of the following websites:

(A select but valuable list of major NZ poets with pictures, recordings, and critical reactions).

(Details of books and other publications by a number of the authors in the anthology).

(This has very thorough bibliographies for most major New Zealand writers).

(The final text of Kendrick Smithyman's Collected Poems, edited with copious notes and chronologies by Margaret Edgcumbe and Peter Simpson. The first substantial presentation of a major New Zealand poet's works on the internet. Hopefully it will be followed by many more such sites).

(A brief account of the creation of the 1974 and 2004 recorded poetry archives, which were the main source for this book).