Well, it's official. John Dolan is leaving New Zealand after more than a decade spent on these shores. In that time he's published three books -- well, five, if you count two Academic works: Writing Well, Speaking Clearly (U of Otago Press, 1994) and Poetic Occasion from Milton to Wordsworth (Palgrave Press, 2000). The books I'm talking about, though, are two poetry collections put out by AUP: Stuck Up (1995) and People with Real Lives Don't Need Landscapes (2003), and, above all, his novel Pleasant Hell (Capricorn Publishing, 2005).

I must confess to having felt a little suspicious of Dr Dolan before actually meeting him (at Bluff, in fact, a couple of months ago). There seemed something just a little showy about that Doctorate on the Marquis de Sade, those slightly smart-arse-sounding reviews and articles one ran across in Glottis or Landfall from time to time. But then we started talking.

Wow. Was I ever wrong! Dolan is not only a fascinating and generous conversationalist, but a genuine polymath. We started on the American Civil War, then shifted to Science Fiction (Gene Wolfe's Book of the New Sun and Soldier in the Mist, Jack Vance, and -- of course -- the Master, Philip K. Dick), religion, regionalism, poetry ... You can see it's a bit of a blow for me that he's leaving.

And why is he leaving? Because he can't get a job, that's why. No English Department will hire him. Because ... um, well, just because, actually. He shows up the others too much. He's too large and opinionated. Because he gets things done, perhaps.

Admittedly, it is true that he was "the subject of various voodoo death cults among the Dunedin med students, some of whom even produced a T-shirt with a highly unflattering caricature of Dr Dolan with the words 'BLAH BLAH BLAH' beneath it." That was as a result of having to teach a particularly onerous compulsory writing course to this particularly disaffected and mutinous pportion of the student body, though. When I had coffee with John the other day in the Alleluya cafe, we were accosted by a succession of his ex-writing students who wanted to tell him how much his teaching had meant to him -- I began to suspect him of planting them after a while, but no, they appeared to be sincere.

The blurb to People with Real Lives Don't Need Landscapes goes on to claim that "Cowardice and vindictive paranoia combine to form Dolan's crude blood-fingerpaint poetic style." He certainly has a number of recurrent themes: Huns, Barbarian Invasions in general, the last days of Byzantium, The Lord of the Rings (especially Elven maidens), the horrors of American suburbia, etc. etc.

All of which brings us to Pleasant Hell, Dolan's first (and to date, regrettably, only) novel. How exactly can one characterise this insane work? The main character is called "John," and seems to have had a more-or-less equivalent set of experiences to his creator: Californian upbringing, Academic job in Dunedin, curious passive-aggressive relationship with his parents (sulking for twenty years is, apparently, the only way of solving arguments in this menage) -- oh, and his surname's "Dolan."

It's appallingly funny. It begins with a long rant about the wondrous workings of providence, and how one particularly obnoxious Pollyanna called "Canny Scot"who used to write in to the Otago Daily Times about "God's plan" should be strapped to the front of a squid boat and made to "look down into that writhing, pulsing water and see in it God's plan for this antipodean Alcatraz. Let him see how much we matter in the grand scheme. Rope him tight to that light-pole and keep him out there facing the water all night, drooling half-frozen ropes of spittle ... A little fresh ocean spray will do him good. Taste God's cold pickled water. Smell God's cheap diesel fumes. Watch God's choppy waves for ten hours, spewing God's fish-and-chips into the chop at intervals."

There is much in the same vein until we come to the irrefutable conclusion:

"God created this place [Dunedin] as a critique of me."

The universe of Dolan's fiction is a solipsistic hell. The awful degradations suffered by his main character as he crawls through High School and on into College do, literally, have to be read to be believed. His ghastly malodorous Karate clothes, the leather biker boots which gradually strip his feet of most of their skin and all of their resemblance to normal human appendages, become characters in their own right. So does Max the attack-dog, a pathetic shit-smeared wreck from a pound, whose only remaining trait is the desire to kill (non-white) passers-by.

You may think you had it hard growing up (I certainly remember vividly lying supine on the floor by the lockers at Rangitoto College, as one boy kicked me in the ribs repeatedly -- he'd taken a dislike to me on sight, apparently, and made a point of coming up and bashing me every time we met thereafter -- something about the expression on my face, it must have been. I never consciously addressed a word to him [except, perhaps, "ouch!" or "no, please, mercy!"] so it can't have been anything I said). Your sufferings -- my sufferings -- were a fucking picnic compared to "John Dolan"'s.

I put in the inverted commas because I tried to console myself at first with the idea that he might have made some of it up -- exaggerated it a bit for effect -- but after a while I was forced to conclude that these awful things had indeed happened ...

Perhaps the most terrible, and the most sickeningly funny of all, is the scene where Corey the Klass Klown manages to intercept the note young Dolan tries to pass to the most Elfin of all the girls at his school, a note written in faux-Gothic handwriting (under the influence of that master calligrapher, and adept student of feminine psychology, J. R. R. Tolkien), which reads as follows:

"O Dearest Leigh -- Much have I wished to give to you some testimonial of my affections, yet I know not how. Willt [sic] thou meet me by the stream ere the sun touches the western pines?"

The response from Corey and his cohorts is brutal and complete. "I'm not still standing there, so logically it must have ended," Dolan muses, as one writhes with transferred embarrassment at the completeness of his humiliation. It's not really funny, I suppose, watching another human being suffer. What am I saying? Of course it's funny -- it's the only thing that is really funny (or so John Cleese asserted when trying to account for the popularity of Basil Fawlty).

There's a lot more. It's a pretty thorough denunciation. Nobody I can think of has ever gone further in dramatising his own hapless misery -- but the beautiful precision and effortless competence of the writing makes it funnier to read than P. G. Wodehouse.

The poetry's very good, too -- don't get me wrong -- but Pleasant Hell deserves to become a classic. It's the Catcher in the Rye of the Love Generation (or has someone already said that somewhere online?).

So many goodbyes there've been in my life lately. John and his wife Katherine (an accomplished critic and poet in her own right) are off to Vancouver Island. I hope someone there notices the extraordinary opportunity that has befallen them. The one we've missed. 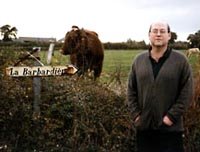 You mean you met someone who had read more than you - maybe even knew more?? Out polymathed you? James Joyced you?
A nice warm polymath? Impossible!!

"Be off with you!" (my English grandmother.

I don't know if it's just me, but I can't help suspecting the presence of just the tiniest bit of sarcasm in these remarks of yours, Richard ...

Of course I could be wrong, and they could be inspired by genuine admiration ... yeah, right.

Any idea why Dr. D went to Canada?

I don't really have much to add to what I said above -- I believe he left because of the difficulty of finding an academic job here ... Hopefully things will go better in British Columbia.