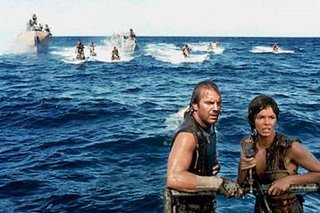 Well, we're really in for it this time, it would appear. I went to see Al Gore's film An Inconvenient Truth at the cinema yesterday, and - yes - it scared me senseless. Well, temporarily, at any rate. By the time I'd got home my senses of inertia and fatalism had begun to reassert themselves.

Some points about it interested me particularly. First, the statistic that a survey of nearly 1,000 peer-reviewed scientific papers on all aspects of Global Warming published over the last decade or so revealed 0% doubt on the basic processes at work. Second, that a survey of journalistic articles published on the same topic over the same period revealed 53% expressing doubt and reservations. In other words, the less you know about the subject, the easier it is to dismiss it.

It's interesting to notice the same trends at work here. The NZ Herald, that bastion of journalistic truth and objectivity, summarises Gore's film as follows (in the appropriately named TimeOut for 28/9/06):

A documentary about climate change which occasionally lets its focus drift but is a compact precis of urgently important material.

Pretty compelling write-up, huh? It's true that there's a lot of stuff about Gore's childhood, career ups-and-downs etc. in the film which might have been dispensed with on a strictly utilitarian basis. But cinema-goers are not strictly utilitarian people, by and large. What's more, one can see precisely why all the folksy just-plain-folks stuff is in there, too. "I am not a crank," Gore is trying to say. "I am one of you" (by which he means an ordinary God-fearing American, albeit a Democrat).

He really really wants people to listen, and uses every conceivable device of propaganda to achieve that end. I'm prepared to forgive that, personally. Like the Herald reviewer, I too would have preferred more content and less barnstorming, but there really is plenty of content there already, and it's desperately disturbing. Basically, we're all going to drown or fry if we don't listen up soon. Both Greenland and Antarctica are melting ... massive rises in ocean levels are no longer just possible but almost inevitable. Combined with out-of-control population increase, that paints a pretty grim picture. Where the hell are we all going to live? What are we going to eat?

Go and see it yourself. There were two other people in the cinema while I was there (admittedly it was the middle of the afternoon, when most decent folk are working). They were teenagers. They sat at the back and sniggered from time to time at Gore's wardrobe. It's hard to know what other reaction they could have to the discovery that their elders and betters have so comprehensively fucked up the world they're going to inherit.

Check out the website for what you yourself can do about it.

The real point Gore wants to make is that this process is not irreversible. It's not too late. Like CFCs and the hole in the ozone layer, we can actually slow down and even reverse the buildup of greenhouse gases. Even if we can't, we can stop it actually accelerating.

I watched another interesting film last week (on DVD, somewhat belatedly). You've probably heard of it. It's called What the [Bleep] Do We Know?

I guess I thought it might be interesting to contrast it with the Al Gore film because they might both loosely be grouped under the title of "science documentaries" - both have had a lot of success at Festivals and even in the mainstream cinema; both use a lot of heavy-duty authorities to back up their conclusions.

Don't get me wrong, I found the [Bleep] film fun. It was beguiling to watch, and even instructive in some cases, but for the most part I thought it the worst hash of pseudo-scientific mumbo-jumbo and garbled mysticism I've come across for a long time.

It began with a lot of very tendentious summaries of the "implications" of quantum theory, delivered by a lot of people in suits made up to look like Stephen Hawking-style physicists, but who turned out later (in the credits) to be teachers of psychic medicine, PhDs in other subjects, freelance lifestyle writers etc. (one of them actually turned out to be "channelling" a great healer from another dimension). This was then extended to the "discovery" that we're addicted to bad emotions, and that if we can just learn to love ourselves, then truth and justice will spread in all directions. The film claimed, in fact, that the crime-rate in Washington DC was lowered 25% one summer by a concentrated act of meditation performed by a bunch of the enlightened.

Now some of this stuff I sort of agree with, really. No-one could seriously contend that the mind doesn't affect the body. The psychosomatic effects of placebos are almost as well documented as the somatic effects of actual medicine. Quantum physics is weird and wonderful.

What I didn't like was this idea of making it all sound scientific by using authoritative-looking talking heads, dressed up in all the panoply of ideological respectablity, and then the gradual revelation that the film's real message was a kind of smug New Age quietism. "Don't worry about anything," it basically turned out to be saying, "because it's all in your mind."

War, cancer, injustice, Global Warming - we don't really have to do anything about any of those things except sit at home and direct good thoughts at them (maybe have a gin-and-tonic and admire the view while we're at it).

Fuck that, is all I can say. William Blake might have attributed much of the trouble in the world to "mind-forged manacles,"but that didn't make him any less prone to intervene himself. In one case the tiny poet accosted a man beating his wife in the street with such fervent indignation that the hulking brute ran away in terror. Acts of injustice (we're told) made him feel almost physically sick.

Al Gore's film uses the arts of persuasion to back up a message which is only too compellingly cogent. If you want to belittle his efforts, provide some similarly solid data.

The [Bleep] film uses half-truths and a vague fudge of science and mysticism to preach the 21st-century equivalent of Mary Baker Eddy's Christian Science (like her female American disciple during the siege of Peking in 1900 who denied that any of it was actually taking place, claiming instead that all the shells and bombs were simply figments of their diseased imaginations ...)

The superficial similarlity of their methods is, I suppose, why I'm devoting so much energy to criticising [Bleep]. It would be just too tempting for all of us to shunt the warnings of Gore's film into the too-hard basket, and continue to console ourselves with the notion that scientists always disagree with one another, anyway.

If the UN stage smelt of sulphur after George Bush had been there, the Rialto cinema (for me) smelt of hope after Gore had had his say. At one fell swoop, Al Gore joins my select group of culture heroes.

I'm not so sure it's much of a discovery, necessarily.

They're from a generation who doesn't believe the media all that much anyway - and they've probably been enjoying jokes about the neocon-led denial of scientific facts in The Simpsons, Southpark etc for a good while now. Film at 11.