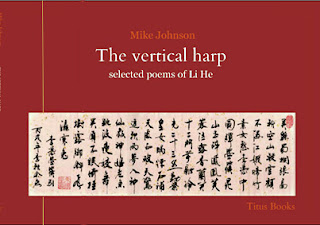 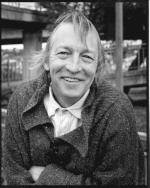 This is the text of the speech I'm intending to give at Mike Johnson's sixtieth birthday party / launch for his new book on Waiheke island tomorrow (fingers crossed):

Everybody knows that Mike Johnson’s one of New Zealand’s foremost writers of fiction. If you didn’t know you really haven’t been keeping up. His strange, futuristic debut Lear (1986) matured into the dark Faulknerian vision of Dumb Show (1996), but there are a host of other fascinating novels and stories to be enjoyed along the way – and I hope there’ll be plenty more to come.

The success of his fiction may have had the effect of obscuring to some extent the fact that Mike actually began publishing as a poet, and has kept up this side of his oeuvre with almost equal intensity. His 1996 AUP volume Treasure Hunt, for instance, is woven around the tragic 1993 death of the Chinese poet Gu Cheng, who committed suicide after killing his wife here on Waiheke island.

The book that we’re here to celebrate today, then, The Vertical Harp: Selected Poems of Li He, represents the coming together of a number of strands both in Mike Johnson’s own work and in recent New Zealand culture.

It’s a obvious truism that, like it or not (personally I like it a lot), New Zealand is moving ever faster towards becoming a multicultural society. The trend is clearest in Auckland, because it’s the biggest population centre, and thus plays a kind of Ellis Island role in our cultural melting-pot.

It’s evident on our streets, our shops, and (above all) in our schools. As a tertiary teacher, Mike Johnson has experienced this evolution firsthand (as have I in my own teaching jobs at local Language Schools and at Massey Albany).

For writers, of course, this is truly priceless material – an “international theme” to parallel the New World / Old World divide of Henry James. And what better way to signal this than by publishing this book of poems from the works of that classic Chinese poète maudit Li He (who some of you might know better under the earlier Anglicisation Li Ho)?

Each of the major T’ang poets has his English adherents. The great rivals Tu Fu and Li Po are probably the most frequently translated (by Arthur Waley and Ezra Pound intially, but then by a host of other more-or-less inspired amateurs or experts), but then there’s the beautifully contemplative landscape poet Wang Wei as well, and then – probably somewhere quite far down the list because of his perceived personal and poetic intransigeance – we eventually encounter Li He, the so-called “Chinese Baudelaire” (perhaps Lautréamont might be a better analogue, considering the fact that he died at the age of 26).

In my case it was in a Penguin book called Poems of the Late T’ang (still one of the great titles, I think), translated by a guy called A. C. Graham. I found the whole thing completely entrancing, and spent far too much time reading it the summer I was supposed to be studying for my end-of-school exams (which is one of the many reasons I bombed out so badly, I suspect. I don’t think the English examiners appreciated being bombarded with platoons of quotes from obscure Chinese poets).

I first came across Mike’s own translations when working on collecting texts for the Aotearoa New Zealand Poetry Sound Archive, an immense collection of 171 New Zealand poets reading their own work, on 40 audio CDs, collected between 2002 and 2004 in all four of the major centres (and now housed in Auckland University Library and the Turnbull in Wellington, if you’re curious to check it out). I was very intrigued by the way Mike seemed able almost to ventriloquise through this 9th-century Chinese poet.

I had, however, encountered something similar with Kendrick Smithyman’s translations from the Italian. In Kendrick’s case, it was as if the necessity to incorporate an ideal of the Mediterranean – amore, pane e fantasia – somehow liberated him from late twentieth-century irony, the corner his exquisite art had ended by painting him into.

In Mike’s case, however, Li He appears to have liberated a kind of inner barbarian, a wilder, crazier poet than traditional Kiwi mores really allow us to be (perhaps he’ll prove me wrong later in the evening).

I don’t want to quote too many examples, as I know he’ll soon be introducing and reading from the poems himself, but I’d like to make just this one citation from “occult strings” – a poem about a female shaman exorcising demons:

on her passion-wood lute, the gold-leafed phoenix writhes
as she mutters and mumbles, face twisting to the harsh sounds
picking note for word, word for note

That doesn’t sound like Arthur Waley. It doesn’t even sound like Ezra Pound (whom T. S. Eliot referred to as “the inventor of Chinese poetry for our time”). It’s time for some new inventors now, I think: both of Chinese poetry in English, and of New Zealand poetry itself. Mike Johnson is among those brave, outward-looking pioneers.

[This is what came up when I first googled Li He, trying to find a representative image. It’s hard to feel that either poet would really disapprove]: 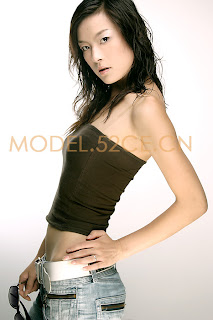