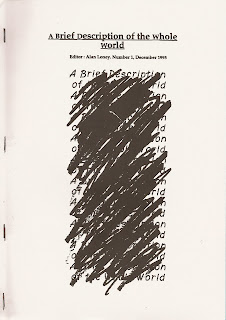 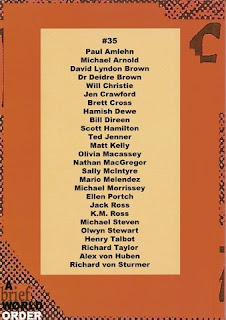 "Your industriousness is a little frightening," says Brett.

Yes, well, I'm just trying to get a lot of things tied away and sorted out before the end of the year. Next year I'm planning to spend a lot more time pursuing my own projects, and a lot less time on editing and bureaucracy generally.

So with that in mind, I've put up a companion to the Poetry Archive website. This one serves a similar indexing function for brief magazine (originally A Brief Description of the Whole World), which I edited between 2002 and 2005.

The longevity of brief is becoming a bit of a phenomenon in itself. It was founded by Alan Loney in December 1995, so with the latest issue, #35 (edited by Brett Cross), it's now reached its twelfth anniversary. (I tried to embed that information in the "profile" page of the new blog, but they informed me that you have to be over thirteen years old to use blogger, so I'll have to wait till next year before fessing up to the magazine's true age.)

I put out a brief index in 2003, shortly after taking over the editorship from John Geraets, and then a short supplementary index in 2005, before handing responsibility for the journal over to Scott Hamilton. So it wasn't all that much trouble to update it, since all that information was still floating around on my computer.

I've put in links to various of the articles which have been reprinted online, notably in the three feature issues - Smithymania (2003), Alan Brunton (2003) and Joanna Margaret Paul (2005) - published as joint ventures with the nzepc, but also to the brief section of the Titus Books website. Other than that, though, the site is really just a big hyperlinked contents list to the issues and authors published by the magazine to date.

Check it out., Hopefully it'll be useful to someone, at any rate.

Oh, and by the by, I'm tendering a bit of an apology to the New Zealand Herald. I was extremely scornful about them in my last post, so I was pleasantly surprised when they named Louise Nicholas as their New Zealander of the year for 2007.

I've just been reading her book, and I have to agree that there doesn't seem to be much serious doubt that the cops she describes did indeed regard themselves as above the law when it came to pressuring young girls into having sex with them (for more thoughts on the whole subject of what constitutes "Consent," see Tracey Slaughter's story of that title. It appears as the opening salvo of my "Open House" issue of Landfall.) The sooner that kind of crap goes out the window, the better. Apparently it was more or less up to individual policemen what "moral standards" they wished to apply in such circumstances. Cops have too much power in the community generally not to be subject to the same rules as teachers and doctors in that respect, I think myself.

So good on you, New Zealand Herald. Maybe you're not so subhuman after all. Though I still think you could break an intellectual sweat from time to time without completely alienating your fan-base, I have to admit that the choice of Louise Nicholas runs precisely that risk, so I do think you deserve hearty congratulations on this one.
Posted by Dr Jack Ross at 10:31 am

Thanks for the new blog, Jack. The brief biographies of the poets makes it worthwhile. Wouldn't it be nice if all these sound files were available online? Happy holidays.

Well, it's not impossible that we may be able to accomplish that one day -- but in the meantime I thought this was something I could just go ahead and do off my own bat. I'd need a lot of institutional support to put up so much material.

All the very best to you for the new year.

Jack I missed that link on here when I looked here before - that is a great index. I have virtually all of the Briefs from the beginning as I was very excited to see something different in NZ literature.

Yes it has changed - but all things do - I never expected to get anything in Brief (I was originally just very privileged and very thankful to be a subscriber only) - you invited me in and thanks for that.

Loney, the original editor, was, and is, a great poet and editor* (and indeed a shaper of NZ literature and poetry - of our culture in fact) - but what he was doing at the start was different in its way - but I feel you and others have kept the general spirit of Brief alive - clearly others disagree with this - it is a pity this question of editorship and viewpoint has not had a more rational debate or dialogue.

Such a dialogue, hopefully omitting all ad hominem reference could have enhanced and enlightened the experience of reading Brief for all involved and for any future readers.

But this speculative and proleptic hope remains in a subjunctive shadow.

But all the editors (given their natural personal, and / or philosophical, differences or "other" view points) - Alan Loney, John Geraets, Jack Ross, Scott Hamilton and now Brett Cross (of Titus Books) have and are contributing to NZ culture and all have done a great job.

* The first thing I ever published was in an issue of the literary mag of the time called Mate (ca 1970 or so) in which there was poem by Alan Loney. I didn't write or even read much literature, since that submission, for about 20 years). BUT I recall the undeniable excellence of quality and interest of Loney's poem ("No Chips Today"); albeit he would probably not write in that style nowadays. There were also poems by Smithyman, Wedde et al.

Loney was Writer in Residence at Auckland University in 1992, when I had returned as a "mature" student to study English literature, when he gave an interesting lecture on his, and general, modernist and postmodernist poetics, and told how he was working on "The Erasure Tapes". That is a great book BTW.