Landfall in the news 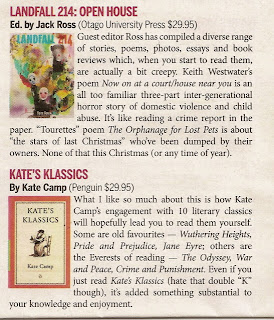 So it's official. Landfall 214 is in the Weekend Herald's list of 88 "Christmas Cracker" must-reads for the holiday season.

But just a second, if it's so thoroughly "creepy" and disturbing ("like reading a crime report in the paper"), what exactly is the attraction? There isn't one, it appears:

None of that this Christmas (or any time of year).

The amusing thing is that the assembled ranks of the Herald's book-reviewing team have found something nice to say about every other single book in the entire list! (Check it out for yourself if you don't believe me: Canvas, 8/12/07, pp. 12-20).

Even Kate's Klassics, despite Linda Herrick's hatred for "that double 'K'", gets a cautious thumbs-up: "Kate Camp's engagement with 10 literary classics will hopefully lead you to read them yourself." No! You don't say! You mean, I too could read these classics, with the astute guidance of Kate Camp? It's too much -- I can't believe it ...

Well, no, I guess it was a bit too good to be true, but even if you just read Kate rather than Homer, Tolstoy, Austen et al., "it's added something substantial to your knowledge and enjoyment."

I mean, fine - setting aside the heavy sarcasm, I do realise that it's the goddamned NZ Herald we're talking here. It's no revelation that it's a bit on the anti-intellectual side. "This must mean you're the best poet in New Zealand?", as Michele Hewitson guilelessly asks Michele Leggott in the laureate interview on the back page ...

But honestly, do we all have to take a vow of brain-death for the whole of the holiday season? Not just then, the little thumbnail review implies: "any time of year." Correct me if I'm wrong, but the fact that Keith Westwater's chilling little "inter-generational abuse" poem reads "like a crime report in the paper" is surely a good thing, no?

Doesn't that mean that this kind of shit is continually going down in our fair land? And, yes, people do abandon their pets from time to time, too.

Forgive if I'm wrong, Linda, but if I actually cranked round to reading War and Peace and all the others, wouldn't I run into a few unfortunate events such as the Battle of Borodino and the retreat from Moscow? Wouldn't The Odyssey remind me of the sack of Troy and the massacre of the suitors? What about Heathcliff hanging a set of puppies in Wuthering Heights? Vanity and greed rear their ugly heads even in Jane Austen, for God's sake!

I don't know that I'll actually be dashing off to read what Kate Camp has to say about these "Klassics" (personally I kind of like the ridiculous Teutonic affectation of that initial "K" -- is The Trial in her line-up, too?), but I very much doubt that her main point is that a quick read of them will bolster up the smug stupidity of the New Zealand haute bourgeoisie. Good on her for trying to stir the pot a bit.

Shame on you, though, Linda, for being such a dolt. Whether it's a "klassic" or a contemporary, the purpose of literature is to harrow the heart and remind us what it is to be human. That's also, I thought, the function of any periodical, whether in the arts, politics, or any other field. If, on the other hand, we want to get lessons in how to be subhuman, we can always turn to that good old reliable New Zealand Herald.
Posted by Dr Jack Ross at 9:24 am

Yes, well, it must have been some kind of concession, then Jack. Journalism is a funny thing. But next time with luck... they will say why it is so good... perhaps they could not find the words! keep up the great work. Bill D.

The Herald etc writes for gibbering imbeciles - but I don't buy the Herald I cant afford it - or if I can I don't get around to reading it all - I might a get a sub to Landfall. But there isn't much of worth in NZ journalism or most of our culture - so called - there are a few glossies - a lot of Lit mags but the main readers of them are those published in them. Mostly they promote pretty bad writing - that is why I am not interested in literary festivals or competition or any of it. Vanitas vanitatum.

The rest are fashion or vaguely sex,or propaganda, or sports for cretins, or more drivel of various kinds of drivel - or propaganda about shite for brains film stars etc etc etc - masses of drivel.

Even the Concert Programme has descended to drivel fro the "masses" (who are morons) except on Tuesday nights...

I one's writing is any good only about 20 people in NZ will appreciate it. I takes ages for great writing ever to be appreciated. If poetry was popular I would be suspicious - there is something in Alan Loney's stance. But one needn't be bitter - nothing will change - if Leggott* is all they can find and all they can ask is if she is the greatest poet then things are looking be bleak...Leggott has ability - but...who cares who is the "greatest"?? (esp. poet!!)

Journalists in general have a brilliant knack for stupidity or crassness - they are corrupt or lack imagination - forget them - forget the Herald - it is crap..

I didn't send in any poems (don't know if you would have accepted them - in fact I usually only send anything if asked as I don't really care that much...) because I don't really care about it all...but I can see how you and those published in Landfall 214 would be irked.

I don't read lists of writers recommended - I have too many books unread. I don't need the morons at the Herald to tell me what is good etc...

I would replace all the magazines and journals and newspapers and television programmes and films and all the music, with the total sewerage output and make a movie of that - that would be more enlightening - a modern Dante would place all the journalists and pop stars and crap mags and films and film stars and sports men and artists and religious nutters and do gooders and soldiers dying in Afgahnistan and pop music and the police and more and more all the crap and detritus and stink of modern popular "culture"; and politicians of all kinds and many others in the sewerage for eternity.

You are dealing with dribbling Morons Jack - they will never appreciate great literature or great culture...

Dogs hogs mass murderers and pigs would know more and be more appreciative...

* She is a laureate of some kind? Then I don't consider her a poet. Hewitson sounds like an imbecile.

Actually I think you may have a point, Bill - it's quite possible that it was meant to be an encouraging piece, but then she simply ran out of space. Possibly I was a little intemperate. I guess it was the implicit insult to all the contributors that made me see red there for a bit.

And, Richard, I don't think all this "laureate" stuff need be quite the poetic kiss of death it is in Britain. There the job's for life, and you are expected to crank out verses from time to time. Here (as I understand it) it's more like a university residence-ship or just a bit of cash to keep up the good work. I agree with a lot of the rest of your strictures, though.

Good points - I waxed on a bit lyrically, a little exagerate! - trying to get some reactions out there!

I agree - the laureate is not as it used to be - when I was at school Masefield was the (British) Laureate - as a child I loved his poems Sea fever and the one about ships ('cutting through the channel with a coke-caked smoke stack' or something...similaris) BUT cant read him as an adult... Ron Silliman goes on endlessly and tediously about Laureates in the US so I thought I would throw that in - I would feel dubious about being a Laureate - of which there is of course no danger!! Strangely thousands don't scream for my autograph in the streets... such is the tragedy of life!

It also occurred to me they had simply run out of space!! But I ploughed on regardless!!!