My friend Mary Paul went up north to attend Hone Tuwhare's tangi at his home marae in Kaikohe. Here's the poem she wrote about the occasion, and also about the long friendship he had with the Paul family, first with Blackwood and Janet, his first publishers, but then on into the next generation: 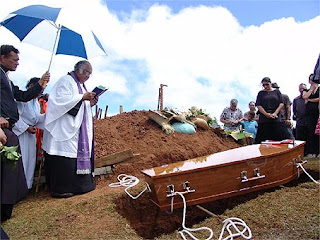 
Your hikoi from te wai o pounamu
Was not planned

Coming back to this marae, not your own but your people are here
Brings your whanau back too

They are humble but resolute, shattered still by your personal land march away from them in 1965

But no-one should feel ashamed

At Akaroa
At Makara

We, like your family, are not as fine as them
But they are you, we are them

This was bound to be whatever we did,
but in taking you, carrying you, holding you,
embracing each other, it comes to be seen to be

Tangaroa scuttles whales
and beaches fleets of dolphins,
Rehua flies moreporks
into an overpass,
Tane sends chainsaws
to chew on totara:
let’s face it, Hone,
the Gods are bloody stupid.
They give, and they take
away. They were stupid
again, this week.

Hine-nui-te-po was a bird
in the pub at Mangakino.
Not the blonde,
not the brunette, whatever
their names were –
the other one,
the one 'with the dampness
of the earth in her veins'.
The one with the blackhead
on her chin -
the one filling an ashtray
in the corner of the pub,
under the dartboard
that had lost its numbers.

You ignored her,
but she was watching.
At closing time she sidled home
to sew you a suit.
She had to leave room,
knowing you’d fill out,
with Common Room sausage rolls
and literary dinners,
with Kaka Point homebrew
and with hot air.
Years, decades passed,
but the suit was waiting.
You’re wearing it now
as they squeeze you into the hole.

To write is to take
some little thing from death,
from Hine-nui-te-po,
'the Great Lady of Night'.
You took a dozen toi toi
and the rain on
a corrugated roof;
the Southern Ocean
and the walk down Highway One.
You left her a mound of earth
on the edge of Kaikohe,
and noon traffic backing up
to Ngawha Springs.

That's a really lovely poem ... You don't feel like signing it, do you? I'd love to know who the poet is.

I was going to praise The poem by Mary Paul but then I see this one by anonymous and its also a great poem!

Hone was Maori but he was also Hone!

Hats off to Mary and Vive Anonymous!

Hats off to Mary and Vive Anonymous!
For a moment I thought it was still Hone speaking.

The author of "Tuwhare" is Maps.

Yes, I've seen it posted at his own blog, Reading the Maps, now: