What makes House so darn loveable? 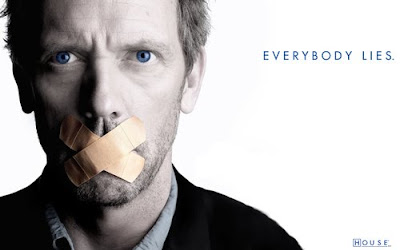 I've been mulling over this one for quite some time now - trying to get the right angle, you understand.

A couple of weeks ago I thought I had it: the resemblance between Dr Gregory House and Mr. Sherlock ["sheer luck"] Holmes - both single-syllabled surnames that begin with "H"; both misanthropic smartarses: one with a sidekick named "Wilson", the other with a sidekick named "Watson"; one inspired (& written by) a Doctor (Dr. Joseph Bell of Edinburgh & Dr Arthur Conan Doyle, his ex-pupil), the other actually working as a Doctor (a diagnostician, no less) ... The list could go on and on.

And in fact it does. Unfortunately, when I keyed this inspired notion into Google, it came up with a number of references to websites spelling out the resemblances in great circumstantial detail. What's more, it turns out that the show's producer has made no secret of the pairing, and has even admitted that Holmes was one of the inspirations for House.

Back to the drawing board, then. Or rather, back to my original thoughts on the subject, back when House was new and the novelty of Hugh Laurie playing someone besides the foppish Bertie Wooster or the even more foppish and imbecilic Prince Regent (in Blackadder III) was the most striking feature about the show. 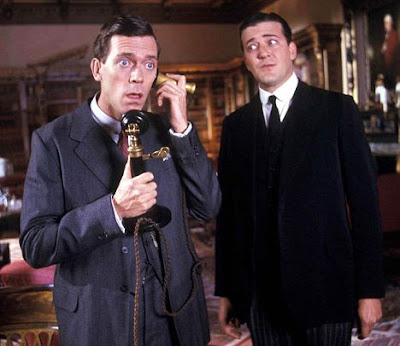 [Jeeves and Wooster]
I thought then that the sheer rudeness and ruthlessness displayed by House in his day-to-day interactions with patients, subordinates, other staff members, and even the long-suffering Dr Cuddy, the hospital administrator could be explained (or at least motivated) in terms of another British invasion.

In a world where Gordon Ramsay is a celebrity because of his use of the "F" word, and where Simon Cowell can trash one pathetic hopeful after another on American Idol, it's become very apparent that only Brits appear to have the right to act as holy fools or licenced jesters in the USA.

The theory went more or less as follows: although Dr. Greg House is American through and through, everyone knows that he's actually played by a British actor. Therefore a certain licence is extended to him which would not apply to a local playing the same role. As an American-impersonator rather than an echt American, he's subliminally regarded as outspoken rather than downright obnoxious - it's rather like the swishy exaggerated emotionalism of female impersonators (in show-biz, at any rate) as opposed to the complex and nuanced behaviour of actual women ...

Something like that, anyway. That was in the early days of House, though. The phenomenon has continued and grown since then. After that came my id - ego - superego theory of House (or of television drama in general, I guess). Normally the protagonist of each show is intended to act as a kind of centralising ego-projection figure for the audience: like lowest-common-denominator Raymond in Everyone loves Raymond (a show which, incidentally, I loathe), for instance.

Raymond's wife, there, represents the voice of reason and proportion, the parents the unruly, undisciplined forces of the id or unconscious -- no code, no rules, no taboos: nothing but unrestrained, single-minded appetite.

But House is no ego figure. On the contrary, he attracts us simply because he enacts the unthinkable - constantly, on an everyday basis. He doesn't like cops. So when one comes to his office he gets him to bend over and prods around his prostate with a rubber glove.

The cop pursues a vendetta against him, trying (pretty successfully) to get him busted as a junkie. House refuses to apologise - wisecracking his way to the gallows. And so on. House steals his ex-wife's psychological records to see how she's getting on with her new husband, then turns her down when she offers to move in with him again. This is id behaviour.

House's guides and mentors (shifting aspects of the superego), in this reading, are Wilson (the voice of ethos and balance), Cameron (the voice of human feeling), Cuddy (the voice of society and its structures). He ignores them all, but it would be untrue to say that they don't influence him - a little. Their dumb and reductionist remarks generally provide the clue for each episode's conceptual breakthrough, the deus ex machina, the blessed break, which he's counting on to justify his own self-destructive, amoral existence.

So where's the ego in this scenario? Well, in the first place, of course, it's the hapless patients, at the mercy of House's insane whims and fancies, cut open one minute, drugged up the next, finally patched up like Humpty-Dumpty and rolled out in a wheelchair (generally - not always: some of them actually die) at the end of each episode.

In the second place it's us. House could be said to be one long experience in Brechtian Verfremdungseffekt [alienation effect]. How far can you go before you turn your audience off your central character?

If you want to lose sympathy with House -- if his boorish, sexist, misogynist ways are starting to obsess or even influence you too much - I'd recommend the experience of watching it on DVD. Bronwyn and I have now worked our way through series one and two from the local video shop, and I have to say the amusement factor is dying down.

House, in short, doesn't have the depth of a truly great character, such as Deadwood's Al Swearengen (interestingly, another American-accented Brit). Ian McShane, of course, had the great advantage of starring in a show which only lasted for three seasons (though there were apparently plans for a fourth, or possibly a telemovie designed to round off all the plotlines).

Swearengen's coarse and brutal ways thus had the scope to evolve over the arc of the 36 episodes he strutted and schemed through. He was able to avoid the imprisoning ritual of long-running, 24-episode, seasons: protracted for as long as audience and network can sustain it. His character, in short, had a beginning, middle and end, like the series he illuminated.

It's no accident that Conan Doyle threw his hero off a cliff at the end of the second series of short stories he'd been forced to crank out for The Strand magazine. His real interest lay in cooking up rather fustian historical novels. No accident either that his audience, unwilling to accept anything from him but Holmes, eventually compelled him to bring the vampirish junkie back to life.

The vogue for both Holmes and House, then, might be said to stem from our perennial fascination with the Undead: those beings beyond the reach of common human emotions and restraints, free to act on their appetites without fear of the consequences.

Count Dracula, their avatar, is undoubtedly the King of Cool (in more ways than one) - and it's hard not to prefer him to his equally obsessive nemesis, Dr Abraham van Helsing. Readers will always have a natural tendency to root for the white whale over Captain Ahab.

At a certain point, though, the fascination comes back to bite you. Just try one of those House-ian wisecracks at the office, and you'll soon see that most of us inhabit with more ease the skin of Ricky Gervaise's abject, haunted David Brent (a distant descendant of Jonathan Harker?) than the stubbly, Byzantine Christ-like features of Hugh Laurie's House ... 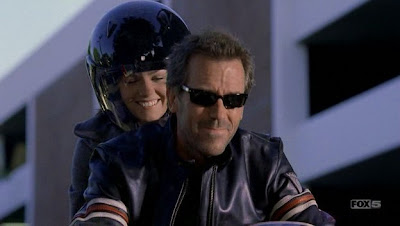 [Cameron as Mina Harker / House as the Count]
Posted by Dr Jack Ross at 11:24 am

Uh, I don't have any intelligent comments on House except can I have some of those pills you scarf, your honor, sir, but I did come across this news story that the author of EMO might want to see. The two brothers, with their different attitudes toward the merchandise, are especially great.

I think you've had a few too many of those pills already, Mr Brecher, sir, but thanks for the tip.

I particularly like the bit in the article where he says it'd be cheaper to spend money on his own, real girlfriend:

"Le doesn't have a girlfriend right now, though, because he's been much too busy over the past year and a half developing the uber feminine robot. (To those who contend Aiko is his girlfriend, he has these words: 'I don't care what they say.')"

There's no denying that he looks suspiciously happy ...