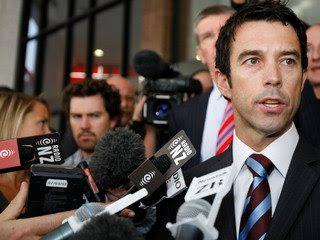 "Time for my close-up, Mr DeMille?"

Yes, I felt concerned
when he went missing yesterday
Tony had tried to do it twice before
his lawyer said

(or was that his publicist?)
kill himself, that is
This time was far more serious
wandering around Ngaruawahia

on his own!
He could easily have been killed
crossing the road
Cynics said it had something to do

When celebrities turn on their own
it’s never pretty
He has been fined & given 300 hours
Oh right, it was his publicist

because “the sentencing hearing
needed to be kept
completely confidential”
I mean, what did they think?

That he was going to fuck
off? It’s hard to get these things
straight, easy to be fooled
by media bias. I mean

to kick a stroppy bitch
down some concrete stairs
when she gets in your face?
It’s just not true that

he left her lying there for hours
with a broken back
I mean, what kind of a man
do you take him for?

& all that namby-pamby
shutting up that she’s been doing
angling for sympathy, I call it
from women and pinkos and gays

It’s as if they had something to prove

You're taking poetic licence there - he didn't kick her down the stairs, that bit got in the paper because of the explanation they gave at the hospital later that night (that she fell down the stairs).

He kicked her when she was lying on the ground, see? It's much better that way and apparently his legal team is prepared to sue anybody who'll say otherwise.

this is brilliant. I love how socially engaged, brash and to the point you are. Somebody off Twitter drew my attention to it. James K baxter immediately came to my mind. The controversy of it all is delicious. thankyou.

Thanks, Jen. Thanks, too, Giovanni, for alerting me to the perils of misstating the case ...

Do you think the following emendation might be politic?

"... how many times
does a poor guy have to cry
on television before we accept
that it’s okayto kick a stroppy bitch
in the back
when she gets in your face?
It’s just not true that

he left her lying there for hours
with broken vertebrae ..."

Surely nobody could object to that?

My second line of defence is the fact that if you read the verses carefully, you see that the whole situation described in this part of the poem is completely hypothetical.

Nothing could have been further from my mind than to imply that Mr Veitch had actually performed any of the acts described in this elaborate projection of contingencies and possibilities ...

I like how you punch low, but literary, which is what makes it ok as opposed to actual punching.

It is incontrovertible that Tony Veitch is entirely to blame for what he did, there are no mitigating circumstances, no possible excuses. But I still can't be as savage as you. I also have done something that resulted in irreparable harm to someone else; there was no excuse for me, no way to have it over again and not do it, however great my regret. No self-pity possible, either; I was not the one harmed, self-pity is disgusting and inexcusable. Don't think I am saying that any circumstances, any 'provocation', can lessen the wrongness of his action. But I still feel for him, because I know how bleak it is to be so wholly in the wrong, and nothing he can do can ever put it right. I can't be as savage as you.

I absolutely accept that it's not for me to judge Tony Veitch's actions, or whether or not he's sincere in his repentance. Maybe he is.

I simply note I've never heard anything resembling an unequivocal apology from him -- they've all come with prevaricating phrases and dark hints about how he was "made to stay" in the situation, etc. etc.

Whether he's a hypocrite or not is for him to judge, but if he would simply stay off television and stop going on and on to everyone about his experiences -- two phone calls to Sunday papers and one text message to a reporter all during his alleged "fugue" on Saturday, all asking them to print a letter he wrote to his ex, after a series of TV interviews on both channels on Friday -- I would respect his right to privacy more.

This issue isn't about him. It's about domestic violence in general. If he gets away with it virtually scott-free, in a case as open and closed as this, how could anyone (who can afford a good lawyer) ever be convicted of it? Crocodile tears = community service, it seems to me.

He doesn't matter. The principle that it isn't all right to bash someone up however provoking you may think they're being is rather more important.

I was watching the Frost / Nixon interviews on DVD the other night, and honestly, the resemblance was uncanny -- the same excessive care over words, the same inability to admit anything -- the basic caginess and instinct for self-preservation at all costs.

You call it savagery, I call it saeva indignatio. I don't admire Veitch's behaviour at any point of this imbroglio -- what he did in the heart of the moment is far more excusable than his actions since, I think. If no-one says anything about it, it pretty much says that lying and cheating and prevaricating are all perfectly acceptable in and out of court if you're a "celebrity in the public eye" ...

Lying about the injury in the first place, cheating those asked to provide references, and prevaricating by constantly trying to imply that the other party was really responsible ...

I don't hate the man, but he doesn't impress me much either. What a role model for his fans!

I am not defending him, or his self-seeking defensive actions and attitudes. I agree that he deserves a lot worse than community service, etc, and your remarks about the importance of domestic violence. As for 'if no-one says anything about it', that's a laugh - this is a media personality, and everyone is saying lots about it, and his efforts to defend himself make everything worse, because, as I said, he is indefensible. 'I don't admire Veitch's behaviour at any point' - well, neither do I. I didn't write in admiration of him, I'm not a fan; but he has destroyed himself, and watching him struggle like a moth impaled on a pin makes me feel sorry for him. Being sent to jail for it would be better for him than trying to resurrect his career. He is digging himself deeper into the hole all the time with his attempts to escape the situation. You say he doesn't matter, only the principle matters, but everybody matters.

Fair enough. I agree that everyone matters. But that doesn't mean that one can't criticise someone's actions, especially when one feels that extraordinary efforts are being made to persuade us to condone this particular set of bizarre events.

And sure, the idea that "no-one says anything about it" may sound like a laugh, but have you looked at the strings of comments on media sites going on & one about how everyone should get off Tony's case, that he's done nothing wrong, and that he should be back on TV right away?

If Tony Veitch lived in a state house would any of these questions even have arisen? Would he not be in prison right now?

His repentance is indeed his business, but the cruel hypocrisy of our legal system is everyone's.

I feel sorry for him too, strangely enough -- but isn't the person whose back he broke also entitled to some of our sympathy?

Having learned a lot more about it than I knew before, due to what you have said, I retract my criticism of your position and understand your poem and its tone. It is much harder to feel sorry for Veitch than it was before.

Revising my views on your views on political poetry.