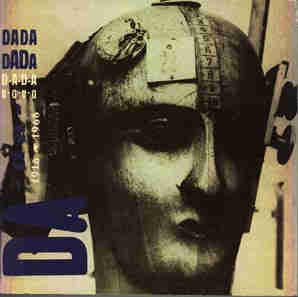 [Dada Head]
393rd Anniversary of Shakespeare's death ...
(& possibly the 445th of his birth -
he was baptised on the 26th of April,
but that was normally done a few days later)
400th Anniversary of Mr. W. H. ...
90th Anniversary of Tristan Tzara's "Recipe for Making a Dadaist Poem"

Check out the rules for the game here.

No sonnets were harmed in the course of this exercise.

(Thanks to Tim Page for filming & editing,
Michele Leggott & Helen Sword for leading & facilitating the project,
which can be linked to here.) 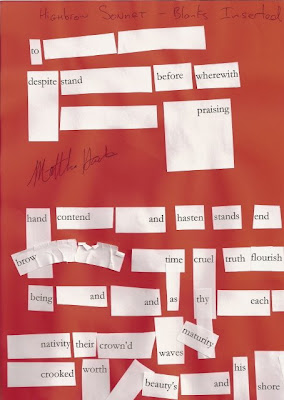 “relation to one another of lines and patterns of sound”
- Basil Bunting, "The Poet's Point of View" (1966)

being and and as they each crawl towards

crooked worth beauty’s and his shore

fight our now in once doth goes youth shall the

his the in do the main which time verse the

hope for on doth gave toil of nature’s gift 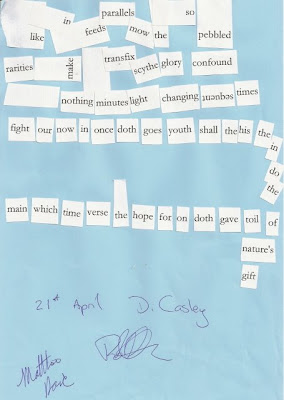 Poetry as ere by as to it in with me

"Poetry, like music, is to be heard."
- Basil Bunting 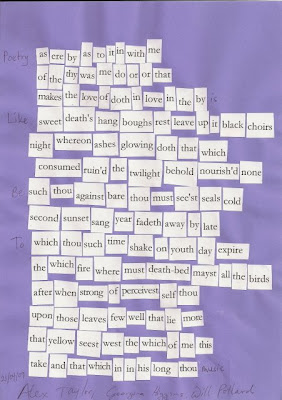 "All the arts are plagued by charlatans seeking money, or fame or just an excuse to idle."
- Basil Bunting

Had despised and spirit shame of past
Having straight mad enjoy’d knows is a trust
All the arts are plagued
No hunted purpose proved lust past so murderous
Dream extreme savage blame cruel in reason
by charlatans seeking
Proposed the waste perjured sooner of mad knows
Expense woe on in swallow’d the have this world
Action very well possession no this had taker
Quest action leads in sooner and reason
money, or fame or just
In a is shun non hated pursuit proof
Joy make extreme behind but not to hell
an excuse to idle.
Bloody the well the bait yet a and before
To that a lust till in heaven to and in
To bliss laid a rude all and as to a men
- Gareth & Daniel & Nolan 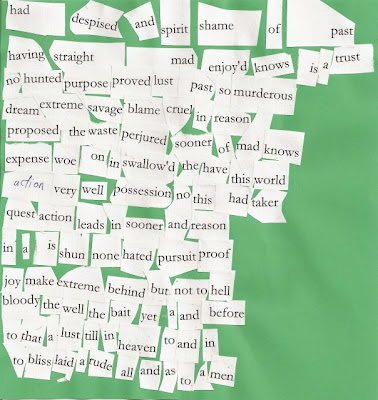 Of with and remembrance before many

“That is not poetry’s business.”
- Basil Bunting

When I sweet thought many and I thee end sad
And then grievances the time’s woe sessions
Heavily and cancell’d unused night pay
For paid new I while of remembrance dear
Death’s afresh fore-bemoaned to from waste grieve
Past friends at of friend can sorrows account
Silent woe a o’er which sought foregone
Then and love’s think to expense dateless if
Things flow sight drown sigh the up before weep
Restored with hid moan tell summon losses
Precious the not dear of the can old my
Vanish’d eye moan many if on an new
Thing all lack in but long wail woes since to
Are I woe a I the and as I of of
By Tricia and Alex! 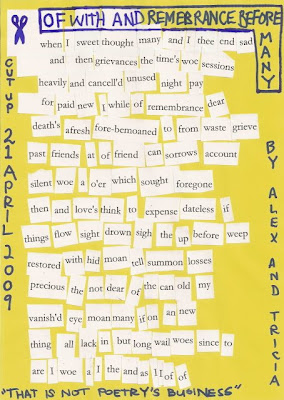 "Such defects no doubt sickens some people
of poetry readings ..."
- Basil Bunting 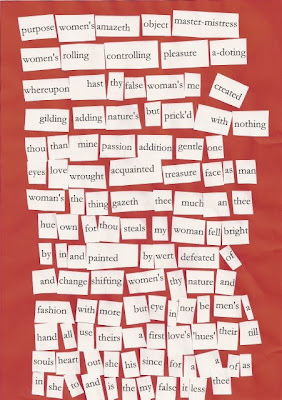 "... the worst, most insidious charlatans fill chairs and fellowships at universities, write for the weeklies or work for the BBC or the British Council or some other asylum for obsequious idlers ..."
- Basil Bunting 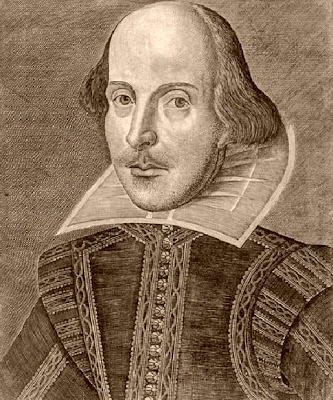