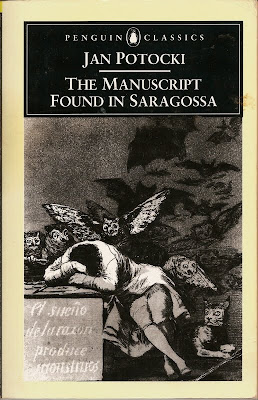 [Jan Potocki: The Manuscript Found in Saragossa. 1989.
Trans. Ian Maclean. 1995 (Harmondsworth: Penguin Classics, 1996)]
Yesterday I went into town to return a few library books and meet up with some literary cronies. The bus was a bit late, though, so I had time to duck into the local Opportunity Shop. If you've read the post below, you'll understand how surprised I was to find this book, which cost me all of two dollars.

Yes, there it is, Goya's Sleep of Reason Produces Monsters (though I notice that the translation on the back cover gives it as the "dream" of reason - an equally valid translation). 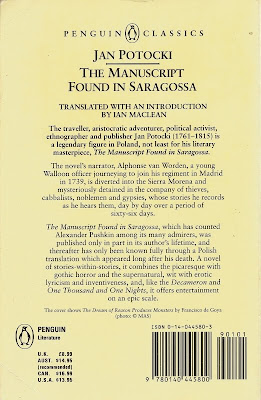 But there was something else waiting for me in that op shop - this: 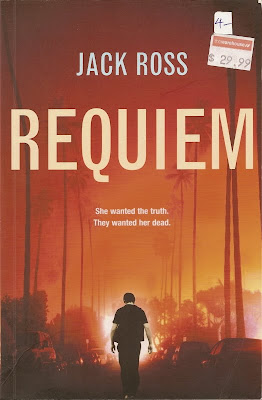 [Jack Ross: Requiem. Hutchinson (London: Random House, 2008)]
I know I've made rather a song and dance in the past about doubles and doppelgängers and other such appurtenances of the Gothic (in fact, you may not have noticed, but in the sidebar to this blog I've got a little collection of "Jack Rosses": the Aboriginal Artist, the Alabama Treasurer, the Bearded Muser, the Brooklyn Copperhead, the Chartered Accountant, the Footballer, the Spoonerist, the Thriller Writer, and the Australian WW1 Veteran ...). This one was the Scottish thriller-writer.

So far so good. That's not the end of it, though. You see, I have a bit of a history with this Manuscript found at Saragossa novel. The reason I didn't already have a copy of this - very handsome - Penguin edition was that I bought the book in French when it first appeared in 1989, on the strength of a long and laudatory review in the TLS, which made it sound like the literary discovery of the decade. 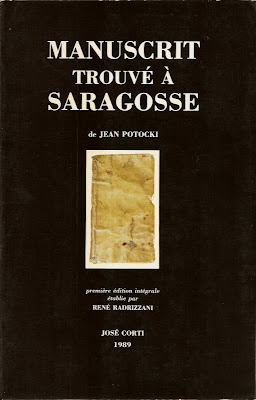 [Jean Potocki: Manuscrit trouvé à Saragosse. Ed. René Radrizzani (Paris: José Corti, 1989)]
It's hard to separate fact from legend where this bizarre book is concerned, but it appears to have been written in French by the Polish Nobleman Count Jan Potocki sometime between the years 1805 and 1815 (when he committed suicide, allegedly with a silver bullet which he'd had blessed by his parish priest in advance). He published a few extracts from it in his lifetime - first in Saint Petersburg, in Russian, and then in Paris, in the original French. The complete manuscript is, however, lost, and while four-fifths of the text survives in something approaching Potocki's final text, the other portions had to be retranslated into French from a Polish translation made in 1847). This is probably what delayed the first complete edition of his book until 1989.

I bought my copy in Brussels, hot off the press, and promptly started to read it (I guess what attracted me was the pattern of nested stories within a complex frame, so like the Oulipo-ian fictions of Georges Perec, whose Life, A User's Manual (1978) I'd also recently discovered). There was, however, an error in my copy - a missing line (or lines) on p.403.

I had to wait till the second edition of the French text, in 1991, before I was able to fill it in. It turned out to consist of just one word: "parts". 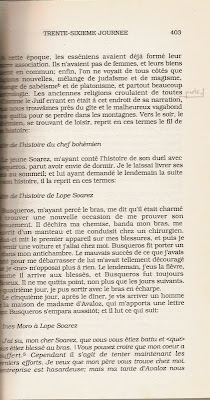 [Potocki: Manuscrit trouvé à Saragosse (1989): 403]
The passage (spoken by the Wandering Jew, one of the innumerable storytellers in the book) translates more or less as follows:

At this time, the Essenes had already formed their bizarre association. They had no wives, and their goods were held in common: on all sides, one could see nothing but new religions, mixtures of Judaism and Zoroastrianism, mixtures of Sabianism and Platonism, and above all lots of astrology. The ancient religions built themselves up with pieces from everywhere.

The missing word comes on p.403 of a book written almost two centuries before the appearance of its first edition. Four and three make seven (just that weekend I'd been discussing the mystic associations of the number seven with a group of students, à propos of the seven gates of the Underworld traversed by the goddess Ishtar).

The passage comes from the 36th day of a story which extends over 66 days (allegedly written down by its narrator, Alphonse van Worden, in 1769, thirty years after the events described, and then sealed in an iron box form which it is extracted by a French soldier at the siege of Saragossa in 1809). 3 and 6 make nine, another number of mystic efficacy (three trinities, etc. etc.)

Hard to say what it all means (if anything), but suffice it to say that mysteries are all around us ... I hope all these omens promise good fortune and not bad. Not for nothing did I put down my religion as "irrational superstition" in the last census! 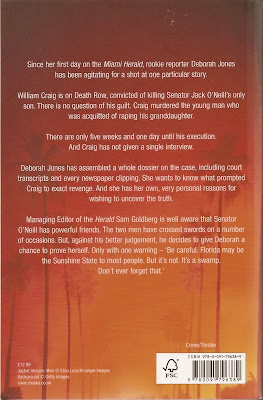 A fantastic encounter with the the uncanny, Jack, worthy of Poe. I'm reminded of an old issue of AND back in the 80s--I think it was the first issue--which featured a diagram of a spacesuit with the letters printed in reverse and the caption: "I'm inside the text now.' That 'inside the text now' has stayed with my for years and came to mind reading this awesome blog post.

btw, I have an idea that that spacesuit might have been the creation of Markman Ellis (whom I remember from Stage 2 Old English), who seems to have gone on to an illustrious career in the UK ...

Paul Auster writes books on the basis of coincidence...I believe, from his "Red Notebooks" that thus he initiated some of his book in 'The New York Trilogy'.

But coincidences simply happen - all the time!!

But this the sort of thing that happens to us all and I liked this and your previous post as I have been fascinated by Goya since 1965 or so!

And Perec, yes, he is fascinating also.

Jack Rosses? I trumped you on that as I copied a Googled page of Richard Taylors to a post a long time ago. But I will allow you your Ross for my Taylor. Ross is good name though. Pervasive indeed but not as sadly ubiquitous as Taylor or its companion name Smith.

As to numbers - there are so many numbers... surely you don't privilege such as 7 or 9 above the square root of minus one? Have you no compassion for pi or e? Or zero, or the infinite? This seems immensely unjust, undemocratic, and, dare I say it, unfeeling of you, to unduly privilege or elevate such numbers as 7 and 66 and 9... !? I am greatly perturbed by the aristocratic lurch manifested by this deeply saddening sign of an obsession with order, numerals, class, privilege, and rank (& perhaps even meaning?!) growing like the ordered madness from the dark soil of chance and chaos... a deeply dastardly trick!

I'm sure you know me far too well to suspect me of any undue adherence to meaning - let alone aristocratic privilege, etc.

Thanks for your comprehensive review of EMO in the latest brief, by the way. That book alone should prove my bona fides in the pursuit of worrying gibberish.

& I fear that M. Michael Morrissey might have preceded us both when it comes to tracking down alter egos. He apparently once had a book-launch to which only people named "Michael Morrissey" were invited - and there proved to be quite a few of them ...

Glad to write that - I really wish someone of greater stature than myself had written such a review - but at least I kicked the ball off as with Brunton...I really did struggle with EMO but it may have been me I found it hard getting into all kinds of writers last year...hmmm...

I thought of publishing your interview either on my Blog or on yours and also (or alternatively) perhaps try to get it elsewhere, and or as perhaps modified a bit... possibly also with my review a bit more concentrated.

Perhaps if others could join in the discourse - such as Gabriel and Brett etc even Bill Direen...I was going over your comments the other night are they are very interesting.

EMO etc is/are certainly quite unusual - I mean who could pick it (or 'Nights' etc) up and NOT be interested? I am in shelf of novels who - except - well maybe Sterne or Rabellais or perhaps someone such as (o.k is NZ there is at least the long poem by Geraets, and perhaps Willy's Gazette or some of Wystan Curnow's books but they are ostensibly poetry only per se (or are thus filed); oh of course there is Ted Jenner's stuff...then there is such as Kenneth Goldsmith, the language poets of various ilk, perhaps Barthelme (stories) or Barth, or Tina Darragh et al and Tom Philip's "Humument" ... there are examples but not many lounge on library shelves or in mainline book shops...

Perhaps Ron Silliman (or someone of his "camp") would look at a copy of EMO? Ross Brighton might want to do a review also...

And Morrissey! When I decided to start writing after years of doing other things - I went to a course on writing he had then I used to see him around a lot at readings or chasing women or both! ... but meantime I got hold of his book 'The new Fiction' which introduced me to many writers I had not heard of - NZ or other... one was Borges, another Richard Brautigan, another Barthelme and so on... and there was Ted Jenner's poem/text and one I liked very much by Chris Else and others...

Can you please tell me where can I buy a copy of the book le manuscrit trouve a saragosse editions jose corti. Thank you.

Luisa - I think your best bet would be to go to the French version of Amazon.com [http://www.amazon.fr/].

There appear to be a large number of competing editions of the book - at various prices - available there.

I would certainly prefer to read more foreign fiction which were translated from Polish translation to english, or in any languages.Because in that way I could have an idea what do people think,feel or their culture is.When we read books from a foreign country it seems like travelling in that country through the stories plot.We could recognize how they have been living afar from our own culture.