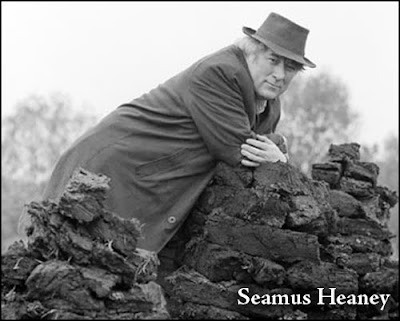 I've been asked to talk about Seamus Heaney to Jo Emeney's sixth-form class at Kristin. I hope they're kind to me. I'm a bit scared of High Schools, to tell you the truth. I'm always afraid I'm about to be hauled off to the headmaster's office for some ritual humiliation followed by a good caning ...

Anyway, the idea is to talk about the idea of poetic genealogy and inheritance (particularly appropriate in Heaney's case, I think: he's one of those who's constantly measuring himself up against the "mighty dead"). 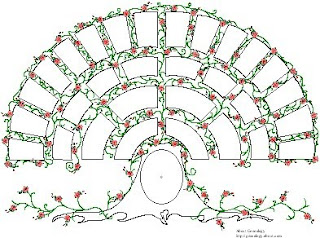 [Family tree (a)]
It's an obvious commonplace about genealogy that it can either be seen to spread backwards from one individual like a fan, or else to move down from that person like a root system.

[Family tree (b)]
If you start off with your own parents, then their parents, and then their parents, each generation is going to double (at a minimum) the number of people you could potentially include in your family tree. If, on the other hand, you start off with some mighty ancestor, you'll disappear in the fine filaments of their innumerable and constantly growing lines of descent. The only way to manufacture a genealogy is therefore to apply some pretty arbitrary rules of selection.

Lines of intellectual descent, charts of mutual influence, are (of course) equally arbitrary, but perhaps no more arbitrary. Clear evidence has to be
produced in both cases.

Starting with Seamus Heaney, then: It's clear that an Irish poet of his generation was unlikely to be able to avoid entirely the example of Yeats. Whether he could or he couldn't, Heaney certainly didn't. The "anxiety of influence" - that complex combination of appropriation and misreading outlined in Freudian terms by Harold Bloom - can be most clearly seen in Heaney's adaptation of Yeats's self-appointed role as spokesman for a reborn Ireland (above all in poems such as "Easter 1916"). 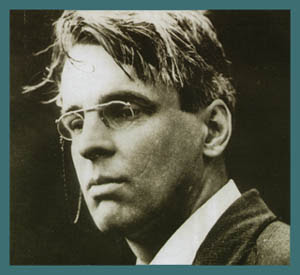 [Yeats]
What lies behind Yeats, though? An equally complex tangle of influences and forefathers, Blake and Shelley prominent among them - but I think, above all, an attempt to (re)create an "Irishness" to match the Protestant Ascendancy's "Englishness", seen most clearly in the innumerable masks and facets of that body of work we generally refer to as Shakespeare. 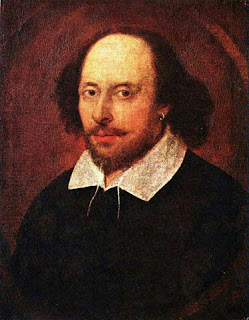 [Shakespeare]
And what about Shakespeare? We know he read (among other things): Holinshed's Chronicles, Plutarch's Lives, Painter's Palace of Pleasure, and Montaigne's essays. "Troilus and Cressida" and "The Two Noble Kinsmen" are not the only signs of his long and intricate conversation with Geoffrey Chaucer, though. [Chaucer]
What about Chaucer? Well, his influences seem to have come mainly from the continent, from French and Italian literature: The essentially medieval Romance of the Rose, on the one hand, the Renaissance Humanism of Boccaccio and Petrarch, on the other. Behind both of these traditions, though, stands Dante's Divine Comedy. 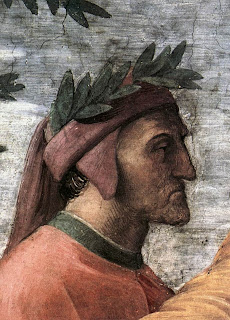 [Raphael: Dante]
Now the story becomes more familiar. Dante's guide through hell is Virgil, whose Aeneid serves as a model (and a rival) for him throughout. 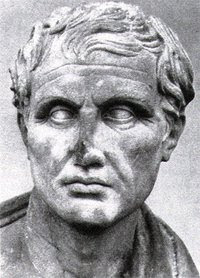 [Virgil]
Dante's precedent for this is Virgil's own relation to the master of all European poets, Homer. The Aeneid attempts to combine the intense warlike seriousness of the Iliad with the more romantic and adventurous atmosphere of the Odyssey.

O land of password, handgrip, wink and nod,
Of open minds as open as a trap,

Where tongues lie coiled, as under flames lie wicks,
Where half of us, as in a wooden horse
Were cabin'd and confined like wily Greeks,
Besieged within the siege, whispering morse.
- Seamus Heaney, "Whatever You Say, Say Nothing" (1975)

So what does this main trunk route of influence actually tell us about Seamus Heaney? Well, it's a bit hard to empathise with the ponderous poetic machinery of, say, Station Island (1984), without understanding just how living a presence Dante is for him. Chaucer can certainly be felt in his emphasis on character studies and portraits of friends (mostly rural, mostly Northern Irish). And when it comes to Yeats, just try paralleling some of the poems in his book about the troubles, North (1975) with Yeats's "Easter 1916."

I've quoted above from some lines from "Whatever You Say, Say Nothing," which appear to compare his own status as a Catholic in Northern Ireland with the Greek warriors hidden in the Trojan Horse. That poem concludes as follows:

This morning from a dewy motorway
I saw the new camp for the internees:
A bomb had left a crater of fresh clay
In the roadside, and over in the trees

Machine-gun posts defined a real stockade.
There was that white mist you get on a low ground
And it was déjà-vu, some film made
Of Stalag 17, a bad dream with no sound.

Is there a life before death? That's chalked up
In Ballymurphy. Competence with pain,
Coherent miseries, a bite and sup,
We hug our little destiny again.

"We hug our little destiny again" does seem to echo the concept of a land where "motley is worn." Yeats's poem, however, goes on to try and analyse just how all this has "changed, changed utterly", and why

A terrible beauty is born.

Heaney's is not so sure.

I almost love you
but would have cast, I know,
the stones of silence.
I am the artful voyeur

of your brain's exposed
and darkened combs,
your muscles' webbing
and all your numbered bones:

I who have stood dumb
when your betraying sisters,
cauled in tar,
wept by the railings,

who would connive
in civilized outrage
yet understand the exact
and tribal, intimate revenge.

This woman, too, had (he claims) committed adultery, and thus been punished with the "exact / and tribal, intimate revenge":

her shaved head
like a stubble of black corn,
her blindfold a soiled bandage,
her noose a ring

to store
the memories of love.
Little adultress,
before they punished you

you were flaxen-haired,
undernourished, and your
tar-black face was beautiful.

Heaney claims to "feel" all this with her, but his evocation of her "naked front" with nipples like "amber beads ... the frail rigging of her ribs" is (as he admits) almost voyeuristic in its intensity. He's quite prepared to acknowledge that while he connives in "civilized outrage" at her contemporary sisters, shaved and tarred consorting with British soldiers, he understands and somehow sympathises with the motvations behind these "exact and tribal" acts.

There's an almost gruesome honesty in that. Of course it recalls the culmination of Yeats's catalogue of the Easter martyrs: Countess Constance Markievicz, that woman whose days were spent "in ignorant good will"; the poet Patrick Pearse, who "rode our winged horse"; Thomas MacDonagh, his "helper and friend [who] / Was coming into his force"; John MacBride, the "drunken vain-glorious lout," who so miserably mistreated his wife, Yeats's beloved Maud Gonne:

Hearts with one purpose alone
Through summer and winter seem
Enchanted to a stone
To trouble the living stream.
The horse that comes from the road,
The rider, the birds that range
From cloud to tumbling cloud,
Minute by minute they change;
A shadow of cloud on the stream
Changes minute by minute;
A horse-hoof slides on the brim,
And a horse plashes within it;
The long-legged moor-hens dive,
And hens to moor-cocks call;
Minute by minute they live:
The stone's in the midst of all.

The fanaticism that deformed these conspirator's hearts, that somehow excepted them from the laws of nature, turned them into unwavering pivots, damming and breaking up the flow of life, has now been somehow transformed. But how, exactly?

Too long a sacrifice
Can make a stone of the heart.
O when may it suffice?
That is Heaven's part, our part
To murmur name upon name,
As a mother names her child
When sleep at last has come
On limbs that had run wild.

Is that last bit a cop-out on Yeats's part? He assigns himself the motherly role of murmuring "name upon name" of those who have died, while resigning to "Heaven" the task of deciding when all this sacrifice will be sufficient.

And yet, is this any less honest than Heaney's self-characterisation as a silent co-conspirator in atrocity?

I who have stood dumb
when your betraying sisters,
cauled in tar,
wept by the railings,

who would connive
in civilized outrage

We know their dream; enough
To know they dreamed and are dead;
And what if excess of love
Bewildered them till they died?
I write it out in a verse —
MacDonagh and MacBride
And Connolly and Pearse
Now and in time to be,
Wherever green is worn,
Are changed, changed utterly:
A terrible beauty is born.

There's a terrible seductiveness in that "what if excess of love / Bewildered them till they died". So were they right or were they wrong? Whose side are you on, exactly, Mr. Yeats? Auden thought that any poet who could write so compellingly about the tragedy of the Easter rising without offending either party was fatally two-timing both history and truth.

Heaney's voyeuristic dumb witness to the "tribal, intimate revenge" taken by the women of Ireland aspires (perhaps) to be seen more like the Euripides of the Trojan Women, whose play was meant to point out the tragic parallels between Homer's heroic age and his own times, the era of the unprecedentedly vicious Peloponnesian war - not so much a partisan response as an attempt to do justice to the complexities of civil war.

Is there a life before death? That's chalked up
In Ballymurphy.

Yeats composed plenty of more rousing patriotic plays and poems (Cathleen ni Houlihan, for instance - "Did that play of mine send out / Certain men the English shot"?). When you're a poet people listen to - both your own countrymen and foreigners - you have a set of responsibilities weighing on you that the rest of us don't really have to feel to the same degree.

Heaney, for good or ill, has inherited that mantle. It must have weighed on him particularly heavily in 1975. 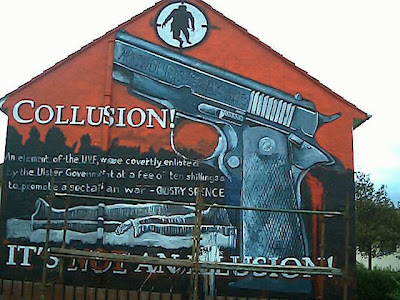 Fascinating essay Jack. I just got out a (new 2010 - from the library anthology) of Irish poetry. Beckett is there! (Antidote to Yeats?!) But John Hewit, Pearse Hutchinson and some poets who wrote in Irish (or Gaelic) only are interesting. Some of those spoke that language only most of their lives.

I think Yeats got it all as right as one could for what he was doing. He might have ignored "politics" and the fanatic heart altogether.

The line(s) such as "A terrible beauty is born." Has always seemed deeply meaningful & beautiful to me and just right - but that is since I was quite young - a teenager - so then and now it still evades me quite what he was meaning. When I hear or read it it 'means' but it seems too drift if I try to anlayse it per se....like Eliot's "The heart of light." I feel certain I know what that is, but what it is I couldn't say!

Best of luck with those evil teenagers!

Yes, one can look at other Irish poets and see how they try to avoid the overwhelming shadow of Yeats. Muldoon repeatedly cites Beckett. Others (such as Carson and Mahon) try to use Kavanagh as an alternative light. It is rather like trying to sidestep Shakespeare, though - difficult to do convincingly.

And certainly, the more one reads him,, the more seems to swim to the surface in a poem such as "Easter 1916" ... I don't know what "a terrible beauty" means either, but in a sense, like you, I feel I do know, have known all along.