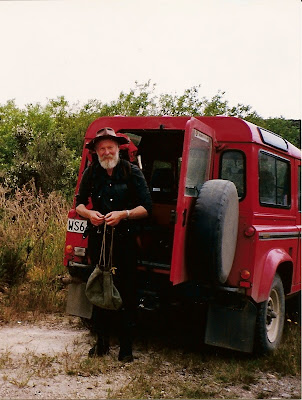 It's five years to the day since poet, priest and ecological activist Leicester Kyle (1937-2006) died in Christchurch hospital. I doubt that he'd recognise the city of his childhood if he could see it today. That former Christchurch is now a thing of the past ...

The main purpose of this post, though, is to advertise the Leicester Kyle website which has been set up by his literary executors (David Howard and myself) to make his writings more accessible in the future - both to those already familiar with his poetry, and those who've never heard of him or it. My model was Kendrick Smithyman's online Collected Poems 1943-1995 site, edited by Margaret Edcumbe and Peter Simpson, and designed expertly by Brian Flaherty.

There are eleven books (at present) listed under the name "Leicester Kyle" in the NZ National Library database, together with another earlier prose pamphlet indexed under "L. Kyle". My present intention is to put all of these up on the website. We'll be supplementing them with another eleven or so works which are not presently available in any public collection, though.

I certainly can't rival the snazzy production values and (very useful) search engine facilites on the Smithyman site. This will be another attempt on my part to make free space on the internet work for us as well as the corporate giants. What I've done, then, is to set up two linked websites:

The first site is as complete as I can make it at present, without further information and research. The second site is more of a foretaste at present, with only a few of his books up in full.

Basically, if you just want to read through one of them, you can go straight to Leicester Kyle Texts, and scroll down reading it page by page (I've also included a jpg illustration of each page, in order not to obscure any details of the original formatting. If you click on these pictures individually, they will enlarge).

If, on the other hand, you want to see the table of contents for a particular book, together with any notes or details from letters about it, you can go to the Leicester Kyle index site and click on the relevant link.

The list below will tell you which works are available already, and which ones will be going up over the next few months. I'll try to keep it continuously updated as each website grows:
• 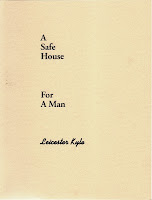 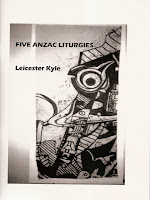 So there you go. I know it's a bit crazy to entrust all this material to the tender mercies of blogspot, but you can be sure that I'll be keeping sedulous backups and printouts of everything as well.
• 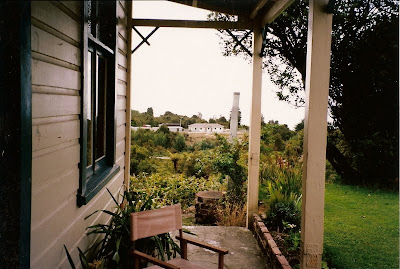 The view from Leicester's verandah at Millerton
[photographs: Jack Ross (2000)]
Posted by Dr Jack Ross at 8:16 am

This is a wonderful thing you have done here Jack. You have so much energy and or good working habits!

I think Leicester did some really interesting and sometimes quite magical poetry and books...

He had a subtle style also. Not "difficult" as one might think of Smithyman but not simplistic at all.

In his own way one of NZ's best poets. Innovative, especially considering he was writing in his 40s to mid 60s etc

Through Michelle Leggott (her poems and a work on LZ's called '80 Flowers') and Zukofsky he came to be fascinated by "Bottom" by Zukofsky. Also the letters between Lorine Neidecker and LZ. Also he came to love Ashbery through me!

In particular he liked 'Spring Day' by John Ashbery in his "The Double Dream of Spring".

And he had a very high opinion of you and David Howard.

I will send more to you for the Blog about him...