& the Madness of Crowds

There's just something about that title, isn't there? Extraordinary Popular Delusions & the Madness of Crowds ... It almost doesn't matter what the book is actually about: the name says it all.

Or does it? Clearly J. P. Chaplin (or his publishers) thought so when they tried to update Charles Mackay's nineteenth-century classic with their own new set of otherwise inexplicable brutalities and pogroms as Rumor, Fear & the Madness of Crowds in the McCarthyite 1950s.

Strangely enough, I'd never actually read the 1841 original, despite its having had such a disproportionate influence on historians and sociologists ever since.

I found a respectable copy of the "Wordsworth Classics" edition in the Local Op Shop on Friday, though, and am presently finding it rather difficult to put down.

I guess I was secretly expecting to find it a bit of a disappointment, and it's true that some of the contents have gone off the boil a bit (the author does rather go to town on his idée fixe, the lives and works of the Alchemists), but - as Professor Norman Stone remarks in his introduction to the 1995 edition - it's terrifying how closely each of the items in the original table of contents resembles one of our own particular contemporary follies. 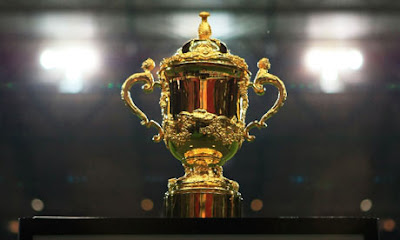 [The Webb Ellis Cup]
One could protract the list almost indefinitely (Mackay's book is, after all, over 600 pages long -- though he remarks somewhat disarmingly in his preface that he could have filled another fifty or so volumes without too much trouble).

Where I'm rather going out on a limb (and risking being torn limb from limb for my lack of patriotism and proper feeling) is by suggesting that all the Rugby World Cup hooplah we've just emerged from is yet another example of the madness and hysteria of crowds.

Wasn't there a slight sense of let-down for just about everyone last Sunday after the All Blacks squeaked in their victory over the French by the hard fought margin of one point? It's hard to imagine anyone claiming to have actually enjoyed the game. Too much was riding on it - or, rather, too much seemed to be riding on it.

The local equivalent of the Boston Red Socks Baseball World Series curse, or England's long dry spell at the Soccer World Cup (since 1966, I believe), had finally been broken. 1987 / 2011 - almost a quarter of a century between victories, after various other teams had actually succeeded in winning it twice in the intervening period.

Yet now, in the cold light of day, so the hell what? Yes, we won it. Yes, it was all done fair and square. Yes, we have a good rugby team. Didn't all our real problems come flooding back over us with a vengeance when we all woke up on Monday morning, though? 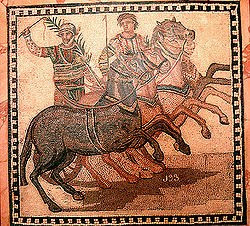 [Roman Charioteer]
It's quite funny sometimes to study accounts of the rivalries between supporters of the Blue and Green teams of chariot racers in Ancient Constantinople (one of the many vices the Byzantines borrowed from Rome). Whole families and dynasties were born into the faith of one or other team. Emperors were defined in terms of which faction they supported. Riots, violent deaths, murder were common occurrences on the streets after a big race. Don't think that the Brits invented soccer hooliganism - Byzantium was way ahead of them on that one. An estimated 30,000 people died in the sports-inspired Nika riots of 532 AD.

It all sounds a bit odd when you read about it now. How on earth could it matter which chariot team won the race? But it did matter - it mattered desperately. It was apparently even worth killing and dying for, that elusive victory over the Blues (or was it the Greens?)

Dare I suggest that this particular extraordinary popular delusion is pretty similar to our own rugby mania: our own unreasonable fanaticism over the fortunes of the team we "support"? What has all that got to do with playing the game, anyway? Isn't it all supposed to be for fun - or if not fun (perish the thought), fitness, team spirit, all those other strange old virtues? Does gathering around the big screen with a bunch of other chip-guzzling and beer-swilling bozos to bay and leap and scream do anything to promote such ideas? Hardly.

So don't think you can get away with simply calling me "anti-sport" or "unpatriotic" ... Trying, on a daily basis, to be a bit less of an imbecile than at least some of the people I see around me is, I must confess, one of my principal objects in life. And I'm afraid, at times, that that means calling the madness of crowds just what it is ... 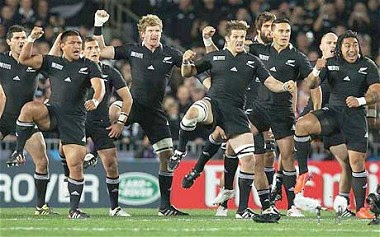