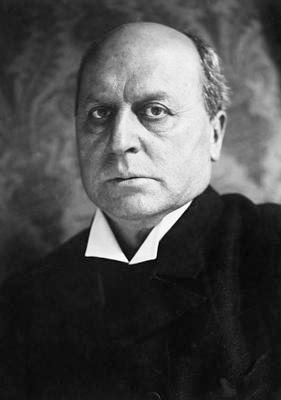 When I said, in my previous post, that the Ghost Stories of an Antiquary, by M. R. James, scared me when I first read them, I was telling the truth, but not really the whole truth. 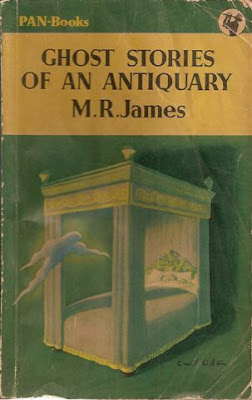 The truth is that I'd already heard one of those stories, one dark evening in a campground when I pestered my mother to tell me a ghost story before we went to sleep, and she'd obliged with a rather abridged version of "Oh Whistle and I'll Come to You, My Lad" - it was that which really terrified me (perhaps it had something to do with the flapping tent and the pitch darkness outside, too). I had the greatest difficulty in getting to sleep at all that night, and the fear of that disturbingly material spectre has never quite left me. 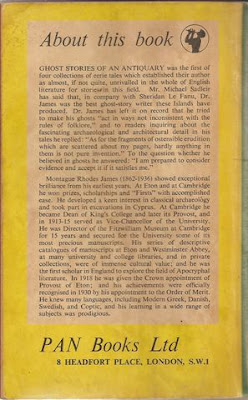 [M. R. James: Ghost Stories of an Antiquary. 1904. (London: Pan Books, 1953)]
I must have already been obsessed with ghosts and ghost stories, though, to have insisted so vociferously on being told one before I could get to sleep. I remember making a hunt through my grandmother's books for anything faintly supernatural, and having to be fobbed off with Wuthering Heights (which does, admittedly, contain a number of apparitions and ghostly occurrences) ... 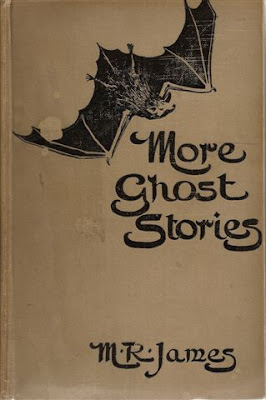 [M. R. James: More Ghost Stories. 1911. (London: Edward Arnold, 1924)]
Henry James is clearly on quite a different level of eminence than M. R. James. Nor are his ghost stories anything like so likely to turn up in paperback anthologies of spooky stories or horrific tales. The best known of them, The Turn of the Screw, is a bit too long for that, and the others, too, are a bit too "literary" for such treatment.

Luckily there's been a recent attempt to collect the best of his stories in this genre: 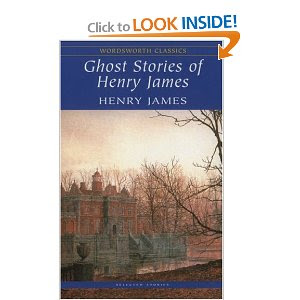 As you'll observe, the stories are heavily weighted towards the latter end of James's career, after the traumatic failure of his theatrical ambitions (culminating in the horrific first night of his play Guy Domville (1995), when he was literally booed from the stage) ...

The blurb to Schofield's collection claims that:

Henry James was arguably the greatest practitioner of what has been called the psychological ghost story. His stories explore the region which lies between the supernatural or straightforwardly marvellous and the darker areas of the human psyche. This edition includes all ten of his 'apparitional' stories, or ghost stories in the strict sense of the term, and as such is the fullest collection currently available. The stories range widely in tone and type. They include 'The Jolly Corner', a compelling story of psychological doubling; 'Owen Wingrave', which is also a subtle parable of military tradition; 'The Friends of the Friends', a strange story of uncanny love; and 'The Private Life', which finds high comedy in its ghostly theme. The volume also includes James's great novella 'The Turn of the Screw', perhaps the most ambiguous and disturbing ghost story ever written.

"The following month, August [1903], [M. R. James] was in Kent, bicycling with Percy Lubbock ... In Rye they met Henry James, a friend of Lubbock's. 'A very pleasant man, he is,' was Monty's verdict, 'talking just as he writes, with punctilious effort to use exactly the word he wants: looks like a respectable butler.'
- Michael Cox. M. R. James: An Informal Portrait. Oxford: Oxford University Press, 1983. p.123.

Henry would have been 60 at the time, Monty almost exactly twenty years younger.

The source of Henry's fascination with the occult probably lies in his very beginnings, though. His father (Henry James, Senior, almost as diligent an author as his two sons, William and Henry, Jr., though far less famous) suffered a strange cerebral disturbance in May 1844, when the family was living abroad in England, which dominated the rest of his life. He called it a "vastation" (in Swedenborgian parlance) and described it as follows:

... a perfectly insane and abject terror, without ostensible cause, and only to be accounted for, to my perplexed imagination, by some damned shape squatting invisible to me within the precincts of the room, and raying out from his fetid personality influences fatal to life.
- Wikipedia

Whatever actually happened that day by the fire, it converted him to a strange type of religious enthusiasm, and formed the subject of most of his subsequent writings.

Henry, then, grew up in a hothouse atmosphere of supernatural credulity and religious fervour (which possibly had some part in inspiring his brother William's psychological investigations into the subject in later life, culminating in his masterpiece The Varieties of Religious Experience (1902)).

None of this really accounts for the continuing fascination of The Turn of the Screw, though. Readers were beguiled by its strange atmosphere and curious dead-end maze of self-defeating meanings long before the publication of Edmund Wilson's essay suggesting that there are, in fact, no ghosts: only an incipient mental breakdown on the part of the unnamed governess.

Since then the debate has tended to be framed in terms of whether there are or are not actual ghosts haunting young Miles and Flora (Benjamin Britten declaring himself definitely in favour of there being real ghosts rather than suggestive stage absences in his 1954 operatic version).

Rather more interestingly, Leon Edel points out in his magisterial 5-volume Life of Henry James (1953-1972), the ages of the various endangered heroines in the works he wrote immediately after the debacle of Guy Domville seem to increase at a steady rate, as if charting some kind of internal psychological process of healing from the "obscure wound" of his public rejection:

Taking them in their sequence as he wrote them, we begin in the cradle with Effie, who is murdered at four (The Other House, 1896); she is resurrected at five (What Maisie Knew, 1897) and we leave her at seven or eight, or perhaps a bit older. Flora is eight ('The Turn of the Screw,' 1898) and the one little boy in the series, Miles, is ten: we are in the period of the child from eight to ten. Then we arrive at adolescence: the adolescence of an unnamed girl in a branch post office ("In the Cage," 1898). Little Aggie, in the next novel, is sixteen, and Nanda Brookenham eighteen when the story begins (The Awkward Age, 1899). With the writing of this novel, James completes the series. He wrote also a goodly number of tales during this time but the childhood sequence is embodied in the longer works ...
- Leon Edel. Henry James. The Treacherous Years: 1895-1901. 1969. New York: Avon Books, 1978. p.261

Once it's been pointed out, this sequence of ages is a bit difficult to dispute. Of course, while it implies a certain self-identification with his heroines, there's also an unmistakable fear of the feminine apparent in James's work at this time.

Like so many other Victorian and Edwardian ghost story writers (the high water mark of the genre), James's spectres seem to embody the more smothering and therefore terrifying implications of domesticity (the "face of crumpled linen" in M. R. James's "Oh whistle and I'll come to you" is one case in point - translated in a recent (2010) TV adaptation of the story into an actual wife, suffering from dementia in a nearby nursing home; some of E. F. Benson's ghost stories - "The Room in the Tower", for instance - are even more unequivocal).

A recent graphic adaptation of The Turn of the Screw, by Guido Crepax, sees it (somewhat predictably) as a parable of the governess's repressed sexuality: 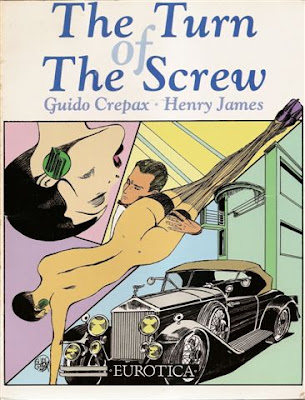 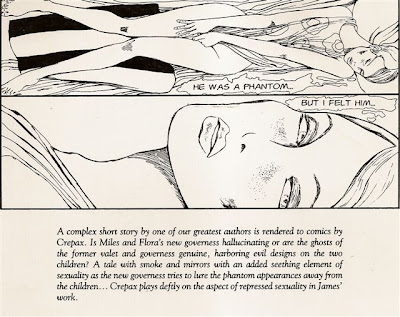 [Henry James. The Turn of the Screw. Adapted & illustrated by Guido Crepax. 1989. Translated by Stefano Gaudiano. New York: Eurotica, 1995.
Most readers would see her as more threatening than kittenish as she manifests in the pages of the story, though perhaps Crepax is right to couple her directly with the seductive brunette Miss Jessel in the front and back cover illustrations to his version.

James had, after all, observed at close hand the ingenious way his invalid sister Alice used her illness as emotional blackmail in the long struggle for the sole attention of her companion Katharine Loring. He'd also been appalled by his own close friend Constance Fenimore Woolson's suicide in Venice in 1894. Whatever the truth of his relationship with "Fenimore," he regarded this act as a betrayal of their intimacy, and immediately rushed to Italy to secure any of his letters or other papers which might be found lying around among her effects.

Seen in these terms, then, the other James's admission "that, though I have not hitherto mentioned it, I have read The Turn of the Screw" might be seen as more the recognition of a kindred spirit than with any implication of disdain or bafflement.

More on that subject in my next post, though: 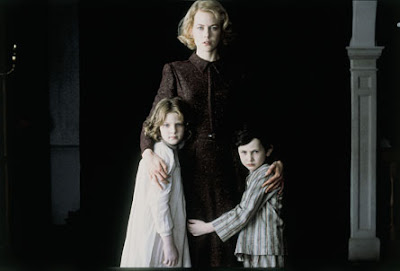 [Nicole Kidman in The Others (2001), Alejandro Amenábar's strange hommage to "The Turn of the Screw"]
Posted by Dr Jack Ross at 10:47 am

eeek! That vastation sounds terrifying. Just those four words, "some vague shape squatting"...Extremely squirmy.
M.R.'s description of Henry is very funny. He also looks a bit like Uncle Fester from the Addams Family.
John once read me "The Ash-Tree" from Ghost Stories of an Antiquary that scared the living bejeezus out of me.
Thanks for a very interesting and elegantly writen post!

"Besides the hells there are also vastations, concerning which there is much in the Word. For in consequence of actual sins a man takes with him into the other life innumerable evils and falsities, which he accumulates and joins to himself. It is so even with those who have lived uprightly. Before these can be taken up into heaven, their evils and falsities must be dissipated, and this dissipation is called Vastation."

I guess the idea is somehow opening yourself up to the vastness of the spiritual realm whilst still in the physical body - what Coleridge calls becoming "habituated to the Vast" ...

All in all, it's not surprising if Henry Jr. still looks a bit bug-eyed in the picture if he had to put up with that kind of stuff all through his childhood ...

At first I thought he might be referring to Panic Disorder or PTSD but I see he means Vastation something of a more spiritual nature.From the supernatural angle it could be an elemental haunting.