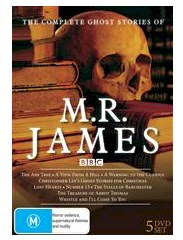 Bronwyn and I have been spending a fair amount of time lately watching this set of old M. R. James ghost stories, some filmed in the 1970s, others more recently. There's no sense in which it's "complete" - it lacks various other television and film dramatisations, mostly released through ITV - but it's not a bad representative sampling.

Here are two other short M. R. James films not included in the box-set: 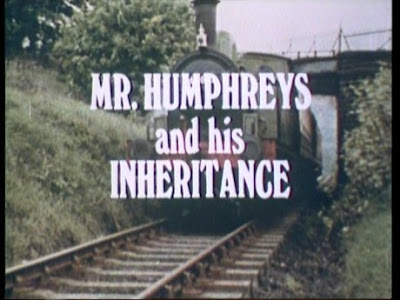 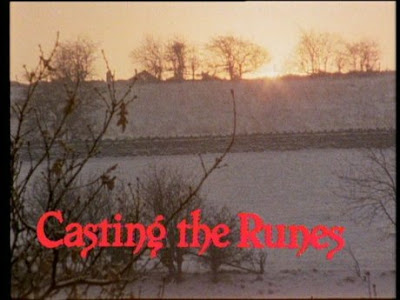 I guess what it made me realise is just how difficult it is to make a convincing and scary ghost story - either in print or on film. Probably the most effective versions included here are the ones filmed in Kings College, Cambridge, where Christopher Lee sits with a glass of port and simply retells various James stories to an audience of gowned undergraduates - thus re-enacting M. R. Jame's own annual Christmas ritual.

But who was M. R. James, anyway? I suppose that nowadays he may need a certain amount of introduction:
Montague Rhodes James (1862-1936)

The first of these books I read was the first he wrote, Ghost Stories of an Antiquary, when I was a kid, and it scared the life out of me. James was an Academic by profession, specialising in palaeography and the compilation of catalogues of manuscript collections (particularly ecclesiastical ones), so it wasn't hard for him to counterfeit a "scholarly" atmosphere of old libraries and dusty erudition.

His other two tricks are simple enough to describe, but quite difficult to emulate (as most of the various people who've tried to imitate him since have found). He makes sure that the ghost steals upon his protagonist largely unobserved until the denouement of the story, but then - looking back - obvious (though overlooked) in a number of early scenes.

He is also careful to make his ghosts completely malevolent - some mindlessly so, others with a distinct purpose - but never friendly or even neutral in their demeanour. Nor do his stories contain any clear moral or instructive purpose.

James never married, and seems to have confined his emotional life to close friendships with college chums (though it seems unlikely that any of these were ever consummated physically). Psychological readings of the "fear of the feminine" implicit in some of his ghastlier phantoms - the "face of crumpled linen" in "Oh, Whistle and I'll Come to You, My Lad" (included in two separate versions in the DVD-set mentioned above) - therefore abound. They don't really seem to solve very much, though. His fascination with ghosts remains enigmatic and unexplained.

He gives an excellent account of his own close study of the genre in the introduction to V. H. Collins' 1924 anthology Ghosts and Marvels, but leaves open the question of his own belief in the supernatural. His final word on the subject is given in the preface to his Collected Ghost Stories: "I am prepared to consider evidence and accept it if it satisfies me."

One interesting aspect of James's writing is the fact that his first book was originally intended to be a collaboration with his friend James McBryde, an accomplished amateur artist: 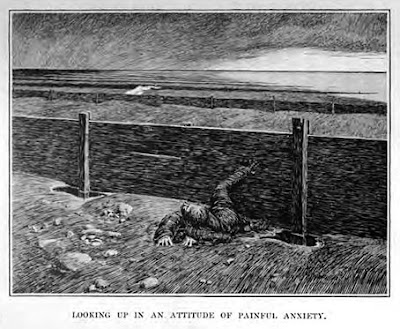 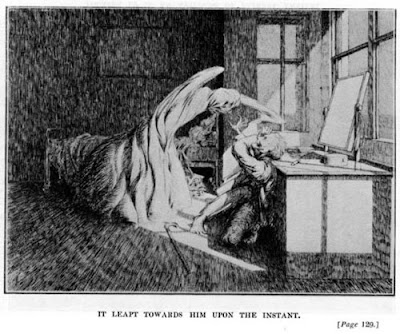 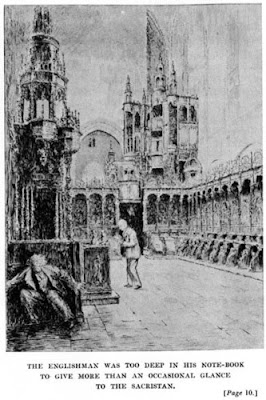 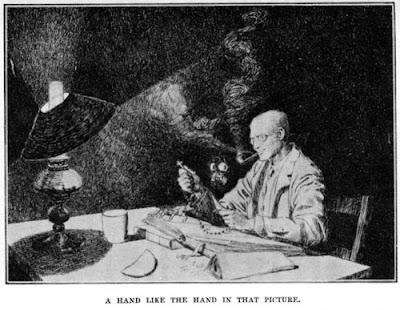 [James McBryde: Canon Alberic's Scrap-book (2)]
McBryde died when the project had just got underway, and only four of his illustrations, to two of the seven stories, were able to be included in the first edition of the book. Looking at them now, I think it's fairly apparent that he's fallen into the fatal error of trying to portray literally what is suggested with masterful indirection by the text: the animated bedsheets in "Oh, Whistle", for example. He was more in his element when it came to church interiors and architecture generally (those groynes in the "Oh, Whistle" seascape, for example).

James brought up his children as if they were his own, and made sure his widow was well provided for. It seems that McBryde's family provided him with some of the closest emotional attachments of his life, in fact.

M. R. James remains a distinct enigma, but somehow his stories refuse to die. Perhaps there's some curious heart to them, some secret they have not yet disclosed (a not infrequent motif in his own fiction: the hidden message on the stained glass windows in "The Treasure of Abbot Thomas" or the sealed chest in "The Residence at Whitminster").

It may have been as a clue to this concealed "figure in the carpet" that he concluded a 1929 article called "Some Remarks on Ghost Stories" (quoted in Michael Cox's 1987 selection of his best stories, listed above), with the following words:

I will only ask the reader to believe that, though I have not hitherto mentioned it, I have read The Turn of the Screw. 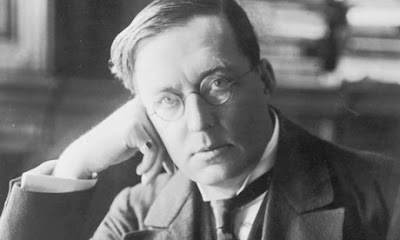