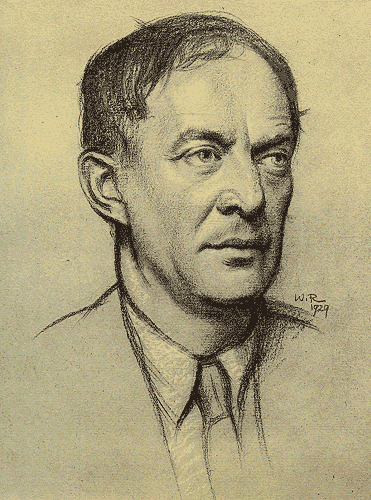 "The Green Room" is a story about a young man named Alan, who is one day let in on the old bookseller Mr. Elliott's "little secret - namely, that at the far end of his shop - beyond, that is, the little table on which he kept his account books, his penny bottle of ink and his rusty pen, there was an annexe."

Beyond the annexe itself (whose paint "must once have been of a bright apple green. It had faded now"), though, there's yet another room, up through "the narrow panelled door above the three stairs on the other side of the room." Alan is lured into going through that door by the image of a young woman's face, which appears in his mind as if out of nowhere. And there he finds - well, I suspect it would spoil the story if I told you too abruptly. 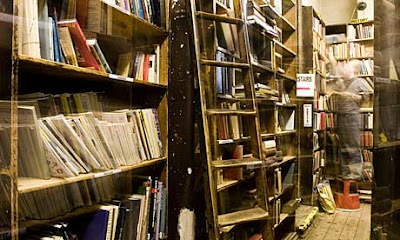 The author of the story, Walter de la Mare (1873-1956), was once quite famous. Even now his poems still turn up in anthologies from time to time: "The Listeners" ("Is there anybody there?" said the Traveller, / Knocking on the moonlit door") is probably the best-known, but there's also "Tartary," "The Children of Stare" ("Winter is fallen early / On the house of Stare") and quite a number of others which have ended up in the children's section of the library.

In his time, though, children were only one part of the audience he wrote for. He was thought of as a poet for grown-ups as well, and in fact the 1940s edition of his collected poems was divided into two separate volumes: Poems (for adults) and Rhymes and Verses (for kids). Here's a list of some of the books by him I have in my collection:

The Auden selection is particularly good, and has a most insightful introduction (as one might expect). De la Mare was quite an important poet for him, and he was quick to reject any simplistic distinctions between "verse" and "poetry" in discussing his work (the rather questionable dichotomy T. S. Eliot tried to introduce in his own 1941 Faber selection of Kipling's Verse). 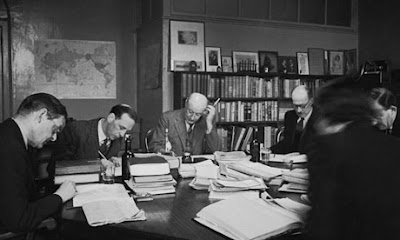 I guess largely as a result of "The Green Room," which I first encountered in an anthology called A Century of Ghost Stories when I was a kid, it's always been de la Mare's fiction which has fascinated me most. "The Green Room" is not a particularly easy story to read. De la Mare is a self-indulgent and over-elaborate prose-writer (or he certainly seemed so to me as a child), and there were few sentences in the story which did not have to be read over twice.

Its subject matter - old books, and the strange and even disturbing discoveries that can sometimes be made in them - was enthralling to me, though, so I persevered. As you can see from the list below, I've been collecting him assiduously ever since:


De la Mare was fortunate in leaving behind a family of literary enthusiasts. His son Richard de la Mare edited the definitive edition of his poems in 1969, and his short stories have now been published in a sumptuous three-volume edition by his grandson Giles, who runs a firm called Giles de la Mare publishers. The ghost stories, such as "Seaton's Aunt" and "All Hallows," are probably the ones most frequently read today, but there are some strange and disconcerting pieces among the stories for children, also ("The Lord Fish" and "The Riddle," in particular). 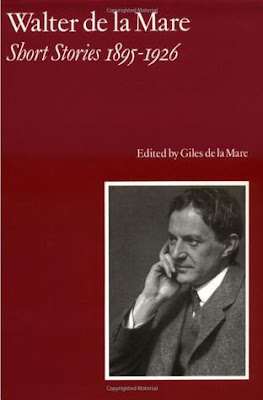 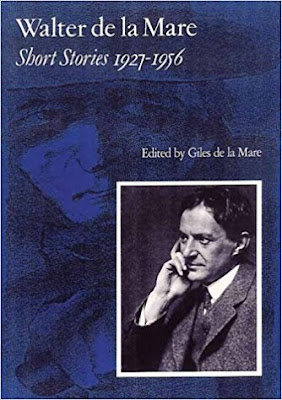 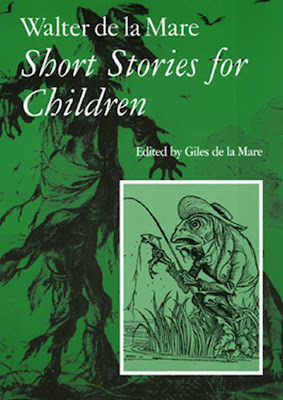 The introduction to Auden's selection of de la Mare's best poems concentrates largely on his famous anthology Come Hither (1923), or rather on the allegorical introduction to the book. The narrator, Simon (Somni? Sleep, or Dream?), comes to a house called Thrae (Earth? Heart?), owned by a Miss Taroon (Nature?), whose brother Nahum (Human?) left behind a collection of writings and curiosities in his room when he left to search for East Dean (the East of Eden?). It is the study of these which led the compilation of the book, which is a strange amalgam of poems, long footnotes, and evocative pieces of prose.

None of his subsequent anthologies and collections of essays could quite repeat the magic of the first, but all of them are interesting, more to dip into than to read from cover to cover: Behold, this Dreamer! (1939) is probably the best; Love (1943) perhaps the most disappointing (one contemporary critic said that one could virtually define the subject by what did not come up - passion, eroticism, obsession - in this immense but patchy book).


There are still a few anthologies - Old Rhymes and New (1932), principally, as well as various books of essays - which I don't have, but most of the rest are listed above. 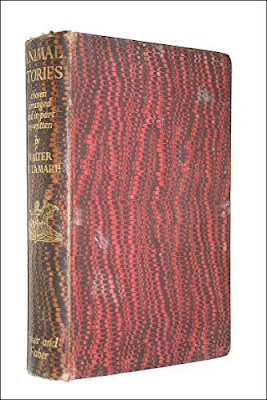 The secondary literature on de la Mare is pretty sketchy: fortunately there's quite a full biography, but besides that it consists mainly of a book of table talk compiled by neurologist Russell Brain, a volume in the Twayne critical series, and a few essays and bibliographies.

Besides that, he comes up in most discussions of the twentieth century ghost story. His work falls more in the penumbra between supernatural and fantasy fiction, though. 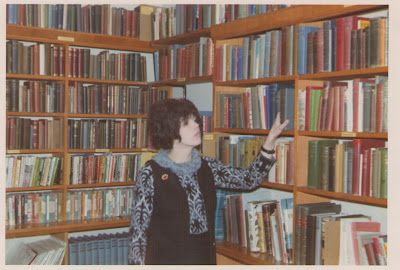 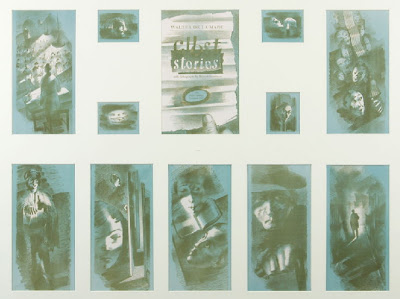 If one set out to psychoanalyse Walter de la Mare, I guess one of the first things that would stand out would be the threatening nature of the feminine in most of his work. "Seaton's Aunt" is the classic case: a sensitive small boy is psychically consumed by his predatory aunt for undisclosed reasons. The narrator of the story abandons him to his fate with the reflection, "he had never been much better than 'buried' in my mind".

There's a particularly strange story ("At First Sight") about a man who is unable to lift his eyes from the ground, and who tries (unsuccessfully) to court a young girl without being able to look at her. Then there's "The Riddle," with its mysterious chest that swallows the children one by one, and its strange last line:


And gossiping fitfully, inarticulately, with herself, the old lady went down again to her window-seat.

Old ladies tend to be survivors in Walter de la Mare - but often (as in this case) they seem to survive the loss of their own faculties as well. 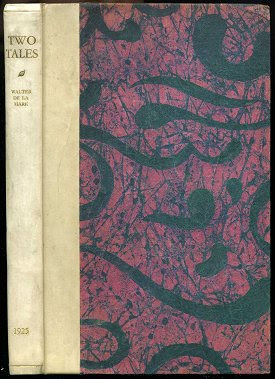 "The Green Room" is, to my mind, one of the most fully realised of all these stories. The backroom of Mr. Elliott's shop seems to be haunted by its former occupant, a young lady who was left on her own there by her lover, and who confided her doubts and fears to a notebook of poems and thoughts, before (eventually) committing suicide there.

Alan finds the notebook (fully and lovingly described, with transcriptions of many Emily Brontë-ish verses in de la Mare's very best manner), and determines to publish it. He decides that this is what she wants, on the evidence of her appearance to him, but it seems he is wrong. The story ends with the ceiling of the room falling in on his privately-printed edition of her verses, destroying all of the copies, and utterly confounding his desire to make it all up to her, somehow, even after her death:


It was too late now - and in any case it hadn't occurred to him - to add to the title page that well-worn legend, 'The heart knoweth his own bitterness, and a stranger doth not intermeddle with his joy.' But it might at least have served for his own brief apologia. He had meant well - it would have suggested. You never can tell.

The citation is from Proverbs 14: 10. More to the point, though, it's also the title of a poem by Christina Rossetti:

Alan has fallen in love with the ghostly face that appears to him; but he hasn't really earned that love. It isn't enough to make up for the betrayal she suffered while she was alive - all she can share with him is bitterness. Her scorn for his presumption outlasts her own death.

I suspect that this - and possibly others of de la Mare's stories - are anchored in events from his own life. Any suggestion that his work is "tame" or "childish" is belied by the dark and hope-denying imagery of the poetry in the story, though. Above all the one that begins:


Last evening, as I sat alone -
Thimble on finger, needle and thread -
Light dimming as the dusk drew on,
I dreamed that I was dead.


And you I loved, who once loved me,
And shook with pangs this mortal frame,
Were sunk to such an infamy
That when I called your name,

Its knell so racked that sentient clay
That my lost spirit lurking near
Wailed, like the damned, and fled away -
and awoke me, stark with Fear.

I've never been quite able to decide what exactly "The Green Room" means, but it's a story whose influence I've been unable to escape since I first read it. It's taken on new shades and complexities in every rereading since. Its final effect is the reverse of comforting, but perhaps that's of a piece with de la Mare's stoic view of life as something to be endured rather than enjoyed - evaded rather than embraced. Brrrr ... 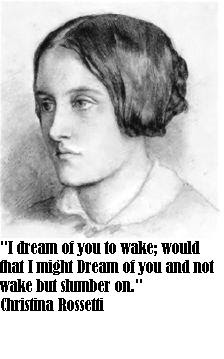 Fascinating stuff! I have never paid much attention to de la Mare. Must have read some of his poems.

I ordered a couple of children's books (stories) via the library. You are using your collection well.
I have only one book by de la Mare - it's The Traveller (FE 1956, illustrated, no d/w, gd.) although I have some of his poems in 'Georgian Poetry'

Some trivia though! I have dentist near here and one time I went and was talking to a dentist (who was filling in I think) and when I said I was interested in poetry etc, he said, my grandfather was Walter de la Mare...then I realized, his name was in fact Delamare. He was an older a roughly my age. From images of W d LM he looked somewhat like him indeed!

So you are in book by King and I had a dentist who had the poetic ghost of de la Mare in him working on my teeth!