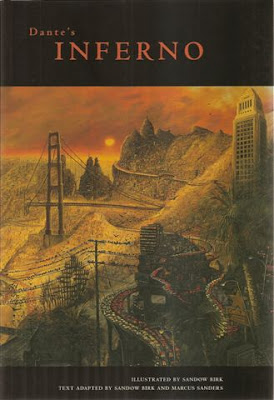 I was fascinated recently to run across this rather strange translation-cum-art project version of Dante. Written by a couple of Californians with delusions of grandeur, the pictures deliberately update Doré's classic nineteenth-century illustrations to the Commedia to a modern West Coast cityscape. 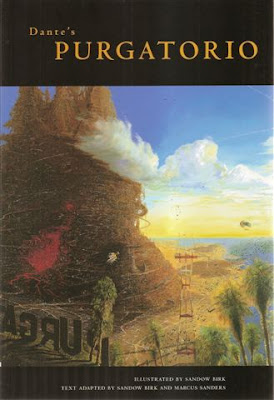 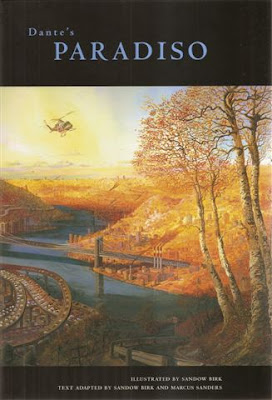 So far so good, but when it comes to the text, the artist and a non-Italian speaking writer friend of his decided to produce it themselves, with the aid of a few academic advisors and a lot of earlier versions. Dante's poetry is transmuted into a kind of slacker valley speak, with frequent modern allusions to make the whole thing more "accessible" to readers (adding Elvis and Rush Limbaugh to the list of gluttons in the Inferno, Jimmy Swaggart to the liars, etc. etc.)

Funnily enough, the result turns out to be extremely readable, even to a nit-picking pedant such as myself. In fact, my only quarrel with their method was that they didn't take it quite far enough. I like very much their updated versions of Dante's famous extended metaphors, but for the most part their content to insert "moderns" only into lists of famous sinners - the central dramatis personae: Paolo and Francesca, Ulysses, Ugolino, all remain the same.

It's not nearly as "poetic" as a lot of other modern versions, but that actually turns out to be something of a virtue. Anything is better than the high-flown translator-speak that so many more self-conscious writers have turned it into. 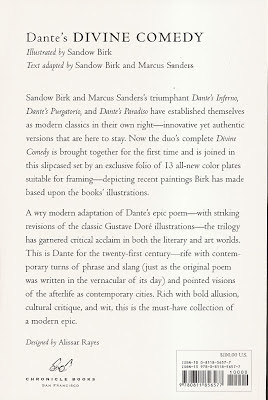 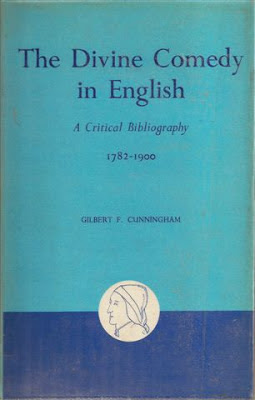 Which leads me to my larger question: why are there so many English versions of Dante's Divine Comedy? It doesn't seem to obsess readers of virtually any other nationality the way it does us.

And, lest you think I'm exaggerating (which I must admit I do have a tendency to do at times), please accept as evidence the following list of versions, extracted from Gilbert F. Cunningham's magisterial two-volume discussion / bibliography of the phenomenon: 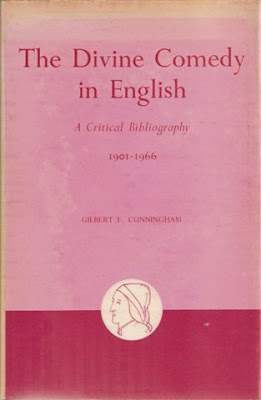 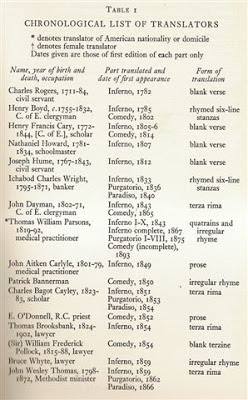 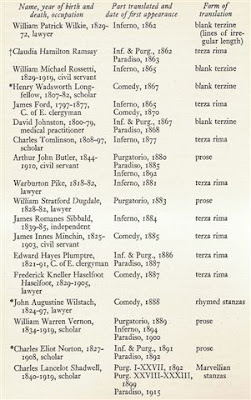 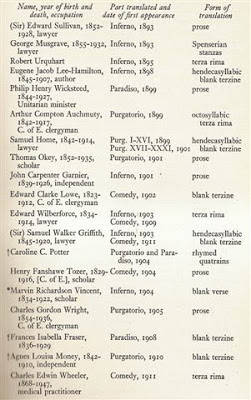 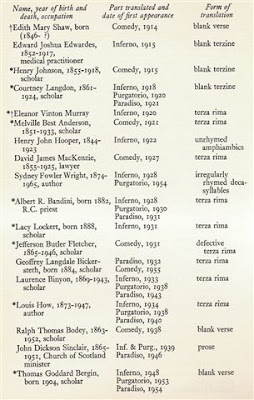 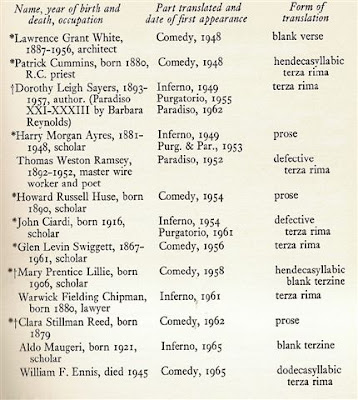 Cunningham's first volume covers the forty versions produced between 1782 and 1900; his second discusses the forty-three written between 1901 and 1966. 83 is an awful lot of translations, but of course the pace has hardly slackened since. I can name at least ten partial or complete translations which have appeared in English in the past few decades:


There's an interesting online discussion at the Librarything website on the topic "Which is the best translation of the Divine Comedy?"

The various candidates who come up are (in alphabetical order): John Ciardi, Robert and Jean Hollander, Allen Mandelbaum, W. S. Merwin, Mark Musa, Robert Pinsky and Dorothy Sayers, so I guess it's fair to say that modern American pet-translators are in the ascendent. It's interesting that Dorothy Sayers is still hanging in there, after so many years, though. 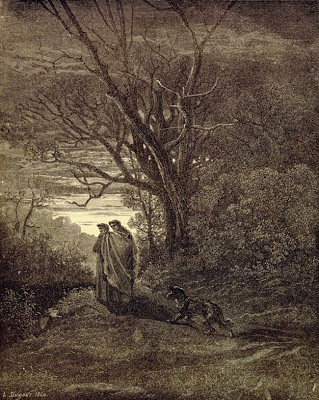 I suppose the question really comes down to the precise reason why one needs to read Dante. If you have any Italian at all - or even a rough acquaintance with one of the other Romance languages - I think a prose dual-text is by far the most practical option. The best of these is probably Singleton's (listed above), though I do myself still find myself reading my old Temple Classics edition, archaic though it is - partially because I know it was the edition that T. S. Eliot used. What's good enough for Possum, is good enough etc.


When it comes to getting a grasp of the story, I suppose that nostalgia (again) might have something to do with it, but I still like Dorothy Sayers rather slangy - but ingenious - postwar verse translation. It was the first one I read, and it's certainly full of diagrams, maps, and explanations of everything one could want to have explained. She died before finishing it, but Barbara Reynolds was certainly a very worthy successor (witness her own immense Penguin Classics translation of Ariosto's Orlando Furioso).


If you're more of a fan of Ezra Pound than T. S. Eliot, there's always Laurence Binyon's immediately post-WW1 version, which Pound (allegedly) gave him a good deal of assistance with. It's pretty readily available still in a volume of Dante's selected works:


If your Italian is good enough to take on the text unmediated, I myself found Natalino Sapegno's notes and comments particularly helpful. (Unfortunately I couldn't get all three volumes in the same version, so you'll observe that the Purgatorio below has a different editor. It was with some relief that I came back to Sapegno for the Paradiso, though.)


For a more recent (and almost maniacally well-annotated) Italian text, you can try:

For a good overview of the whole immense saga of English literature's infatuation with Dante Alighieri, you can't really go past the following excellent anthology:


And finally, if your interest is really more in the influence of Dante's Divine Comedy on the visual arts, you could do worse than have a glance at a few of the following: 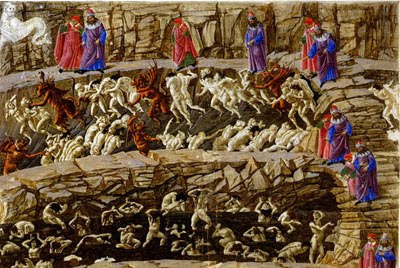 So, in conclusion, why Dante? Why is that the epic-of-choice for so many aspiring verse translators? One reason must certainly be the comparative ease with which one can acquire a working knowledge of Italian, by contrast with Greek or even Latin or German.

Or is it the Christian cast of his epic? Dante's Comedy is, after all, in accord with the dominant religious philosophy of the past two hundred years - and provides a useful summary of basic Thomism for those wishing to dispute the basic tenets of the Enlightenment.

Is there something reactionary about Dante, then, which explains his continuing vogue? That would seem a beguiling theory if one hadn't actually read him. I prefer to think of Dante as a quest-hero, a benighted traveller looking for answers in the least likely places. That constitutes a good deal of his appeal as a character, I think, and goes a long way to explain why one's enthusiasm for the story is a little difficult to sustain in some of the more abstract sections of the Paradiso, when the poet turns to providing us with long, wrong-headed explanations of elementary physics through the mouths of the various saints and angels he encounters there.

To claim the Divine Comedy as proto-SF is perhaps to take it a step too far, but there's no denying that it's one of the great narratives in world literature - every bit as beguiling (and far better structured) than the Odyssey, and without the grim, bloody pointlessness of so much of the Iliad and Aeneid.

In the final analysis, though, your guess is as good as mine. There are as many comedies as there are readers, and - it would appear - almost as many translators. 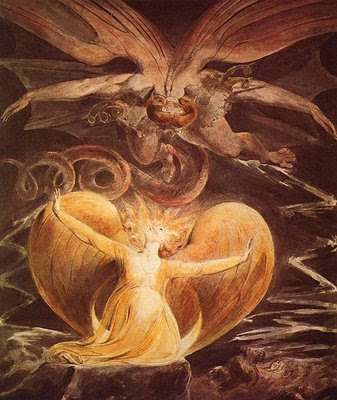 Hi Jack I have had a translation by Henry Carey (put out by Everyman in paperback) since about 1968. I read it as I was mystified by T S Eliot's references to some chap called Dante! Also, to add to my dilemma they were in a strange language. (And he had all this Greek, French etc etc (I didn't know much about Pound then fortunately!)) It was good I recall. But it is some time. More recently (about 2005or so) I read Sayers three volume book. I'm keen to re-read it. I prefer it in some ways to The Illiad which I also found (relatively) pointless except for its classical or informative value. The Odyssey was better but best were Ovid's Metamorphoses and The Golden Ass. So far I've only seen Vol 2 of Orlando F.

Ashbery references it in one of his (humoresque, or mannerist) poems which drew my attention to it (OF I mean).

Re the Divine Comedy, I think partly it is the story which is concentrated and of course the fundamental issues of hell (and there are some horror stories there! Mahomet, being a heretic/schismatic is placed in hell! ), heaven, redemption etc etc I like the way it leads to that ending with the Rose etc which was Eliot's image. I think for him it was terribly real, as the Greek Gods were at times if not always for Pound...

David Denby wrote Great Books (which I read - it got me reading Woolf, Montaigne etc) - he studied what he had done as youth at Columbus N.Y. (the Great Books course) and when they did Dante an Italian girl read it or some of it to them and without Italian he could sense and hear the beauty of it. Perhaps we (English speakers such as myself with no other languages) will always miss that...

I'm writing a poem which references Rodin's The Gates of Hell (i.e. The Burgers Of Callais)!

BTW your piece on the Celan poem is very interesting. Talk about tortuous and tormented! Poetry as a kind of therapy or a self-torture? And, also, your sister's poetry is amazing. Very good. But I haven't finished reading Brief.

Great introduction to the launch of Celanie and Brief & well done by Michelle Leggott.

Cary's was the first substantial translation of Dante into English -- he was a contemporary of Keats and Shelley (who tried his own hand at a few passages also).

I do find the Iliad has a kind of cumulative power, myself -- the pointlessness seems to me to be intentional, dramatising the pitiless repetitiveness of war, any way. That's certainly how it comes across when one listens to it read aloud, at any rate.

It's certainly a lot easier to like epics which tell more interesting stories, though -- & I do recommend Ariosto in that respect. It's not exactly deep, but it's very entertaining ...