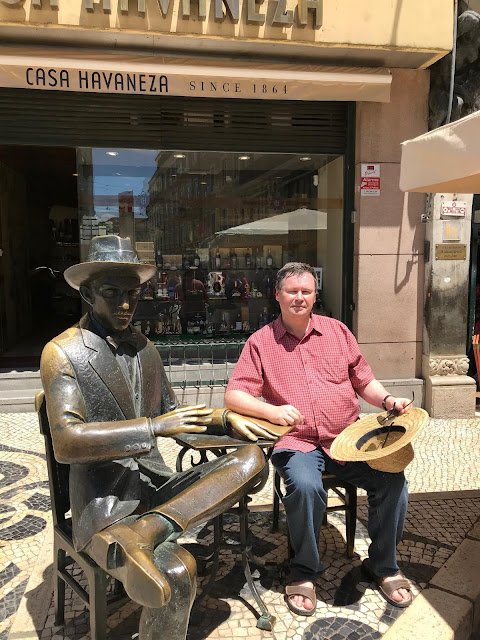 
So, if the song "Starry, Starry Night" is all about Vincent Van Gogh, did it ever strike you that the ABBA song "Fernando" might really be about the Portuguese poet (and ubiquitous cultural icon) Fernando Pessoa? The evidence, admittedly, is somewhat scanty, but when did that ever get in the way of a good piece of literary detective work?

"Fernando" is a somewhat shadowy figure in the song, repeatedly addressed by the speaker, but in a somewhat equivocal way, as if he were not so much an old comrade as an agent provocateur - perhaps the very one who, by betraying their secrets, guaranteed the loss of their cause? "Though we never thought that we could lose / there's no regret," Agnetha is careful to say. Really? Or is that simply a subterfuge designed to put the treacherous "Fernando" off the scent? I've often wondered ...

Mind you, I don't insist on this conjecture - simply mention it in order to underline just how slippery and subversive this Pessoa (Portuguese for "person" - our hotel had a notice specifying that only 13 "pessoas" were allowed in the lift at one time) can be. 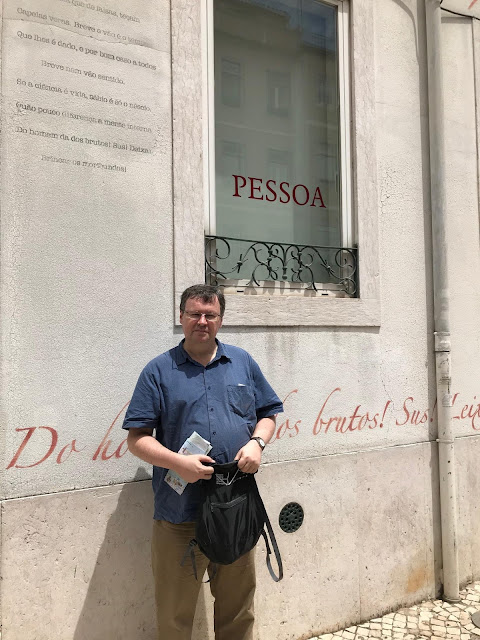 
It could not be said to be particularly easy to find: our cab driver had to crawl along the street for quite some time before we stumbled across it. 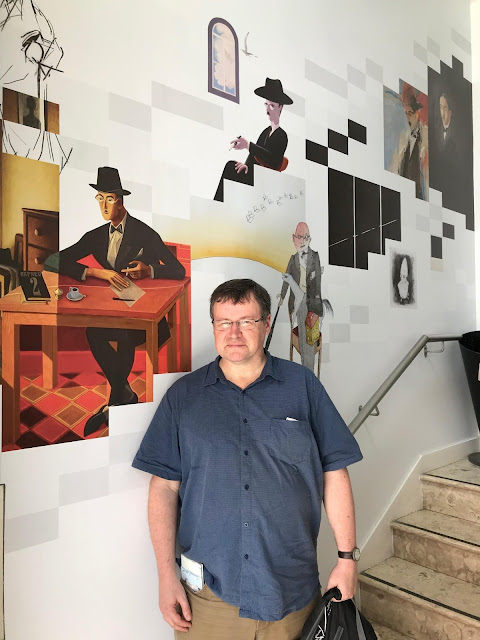 
Once in, however, Pessoa's status as king of the heteronyms is not left in any doubt (for those of you who aren't in the know, Pessoa is famous for evolving a series of parallel identities, or heteronyms, in whose respective voices he wrote a great deal of his oeuvre). 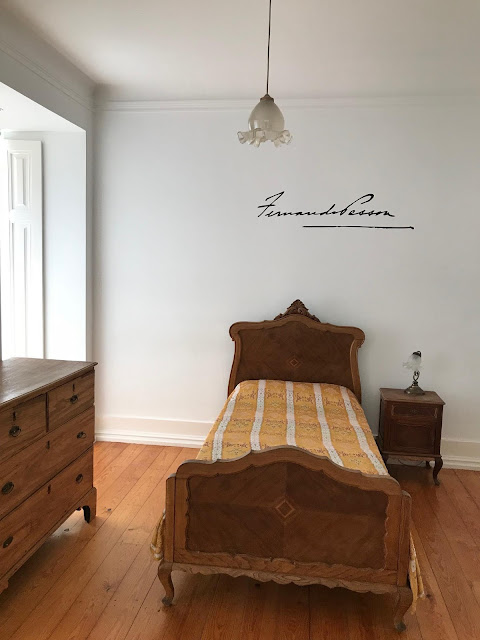 
Here is the poet's bed (or, more probably, a reasonable facsimile of same - while he did indeed reside in this house at some stage, little physical evidence of his presence there remains behind). 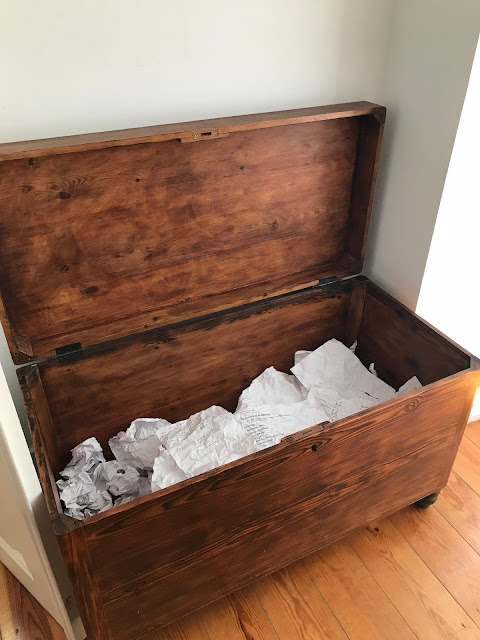 
This chest definitely is a fake: or, rather, a simulacrum of the famous - and apparently inexhaustible - repository of the mass of unpublished manuscripts he was found to have bequeathed to posterity at his death. 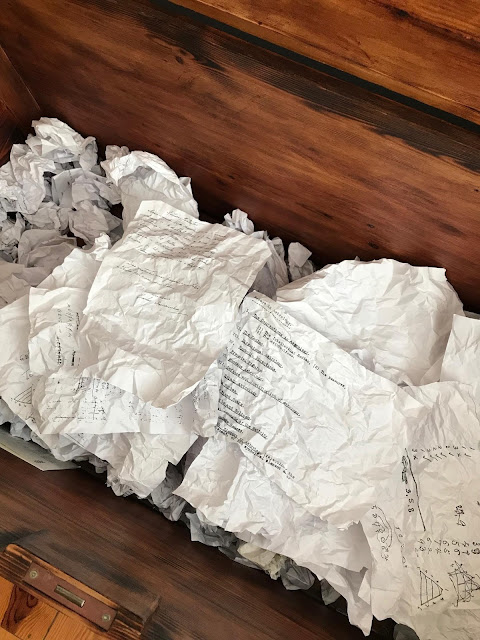 
Whatever they actually looked like, I bet it wasn't like this. Thousands of pages are alleged to have been crammed into this much storied artefact. 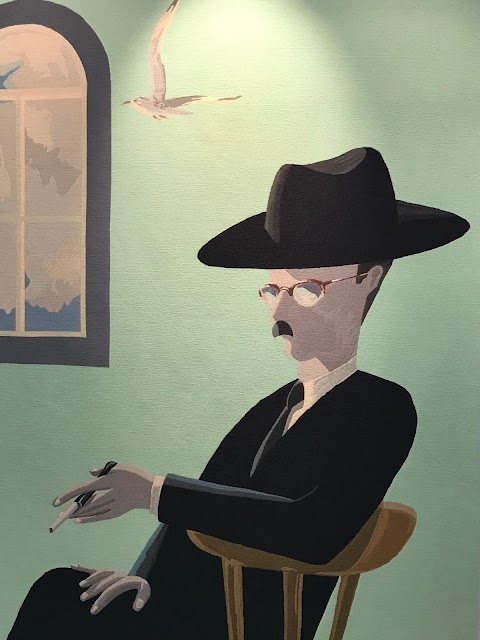 
This picture seems to capture something of his peculiar elusiveness as a person (pun intended). It's a piece of embroidery, rather than a painting, so it must have taken an appallingly long time to make. 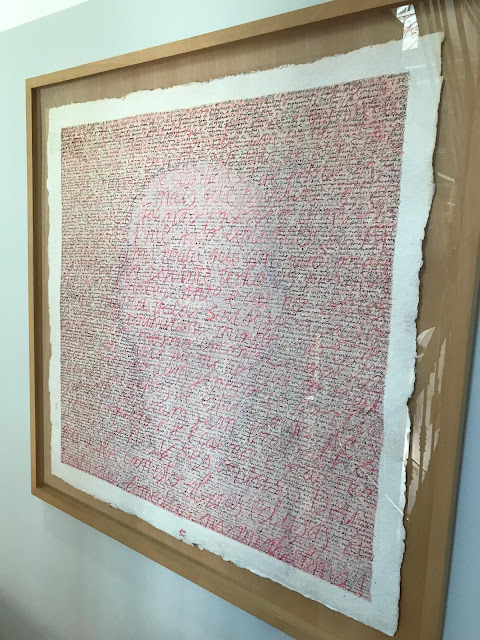 
This rather more fanciful portrait posits him as a purely textual phenomenon: a creature of words rather than flesh and blood. 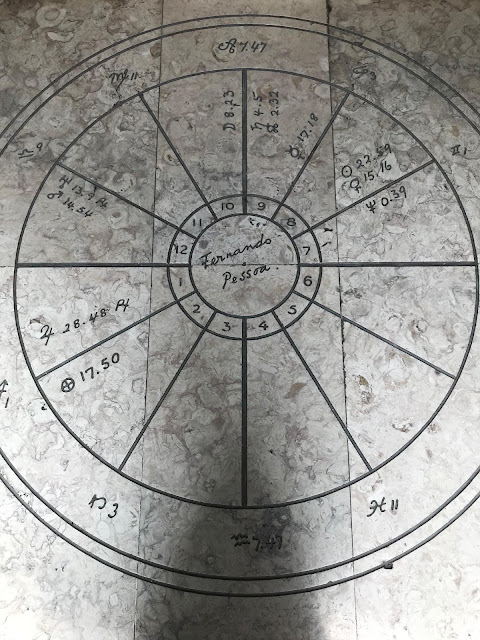 
And here's the poet's horoscope (note how Bronwyn, the photographer, has cunningly inserted herself into the composition as a looming shadow). 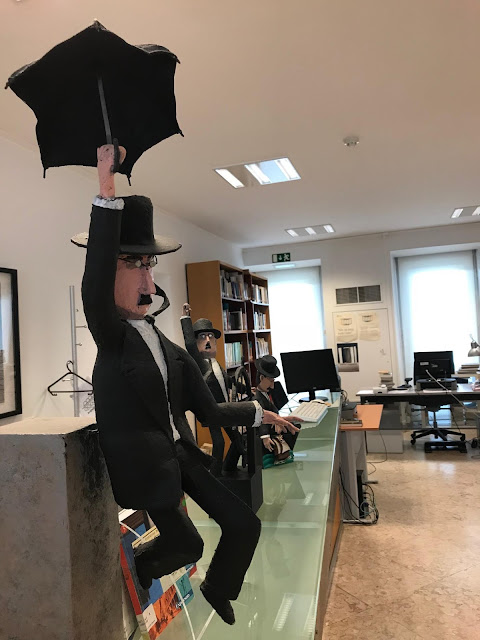 
Here's a shot of the multiple flying Pessoas who infest the Casa's library. I'm not quite sure how these Mary Poppins-like mannequins are supposed to represent him, but they certainly do look rather striking. 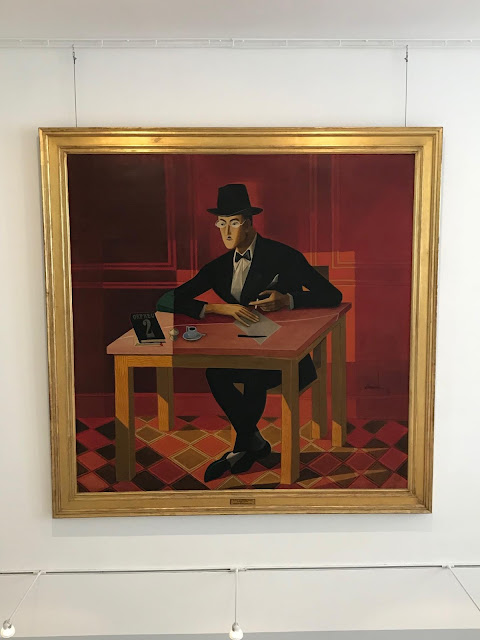 
And here's one of the most famous paintings of the poet, scribbling industriously in - presumably - the Café A Brasileira now adorned by his statue nestled among the tables outside. 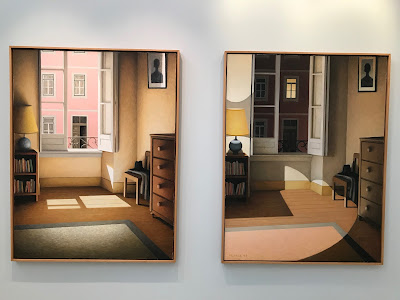 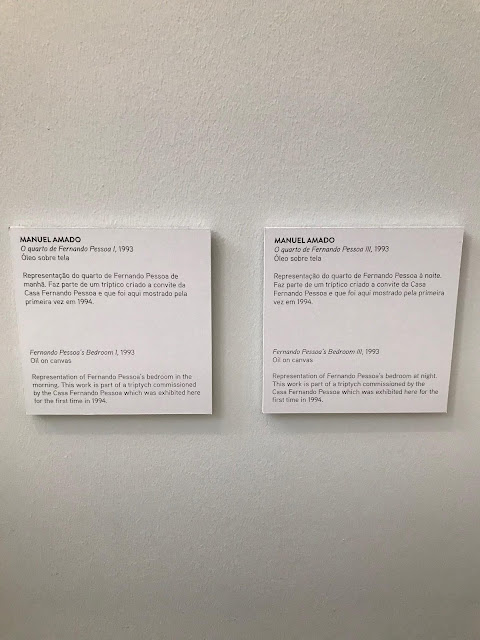 
These two paintings of the view out of his window by day and by night seemed to us the most effective in conveying the strange contrariness of his existence. I don't quite know why they seem so sad to me, so redolent of that peculiar Portuguese quality called saudade, but there they are. I don't know what was portrayed in the third of the group, but its absence makes these two seem even more haunting and thwarted, I feel. 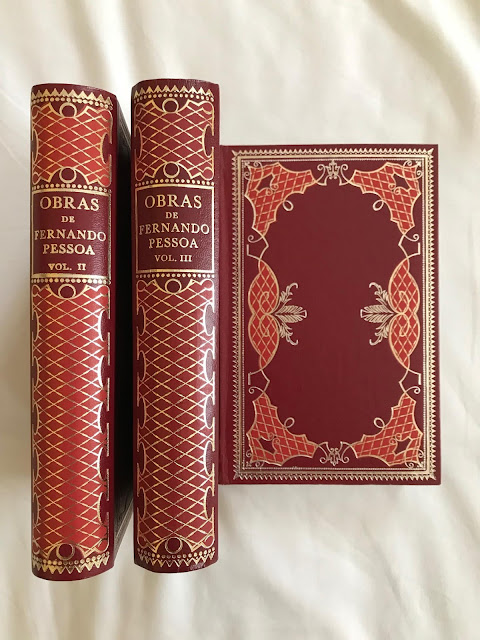 
Having reached an apparent impasse in tracing his steps through the streets of Lisbon, perhaps the best way to come to terms with this most unstable and equivocal of multiple personalities must be through the comparative solidity of the written word?

The three volumes above, published for the fiftieth anniversary of his death, constitute one of the last attempts to compile a reasonably systematic collected works for the poet. Thereafter everything fragmented into the (more-or-less) complete works of this or that literary persona of his. He has become, in the truest sense, a library rather than a human being.

Nevertheless, there are really only three (or perhaps four) major heteronyms one needs to take account of:


Álvaro de Campos is an expansive, Whitman-esque poet of global distances and imperial expansion. In his last phase melancholy overcame him, but he is in many ways the most attractive and accessible of Pessoa's different voices. 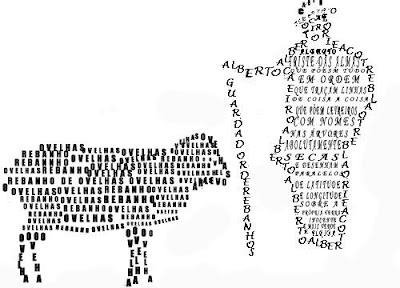 
Alberto Caeiro, the "keeper of sheep," is more of a pantheist - solitary, nature-loving, and (alas) short-lived, he has something about him of a Portuguese A. E. Housman. 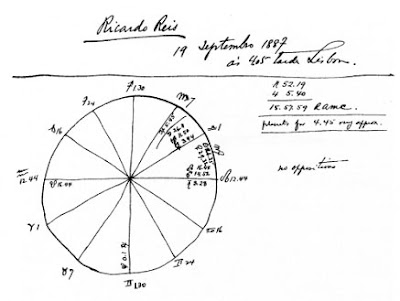 
Ricardo Reis is more of a classicist - and pessimist - than either of his predecessors. The fact that he had no designated time of death led Portugal's other great twentieth-century author, José Saramago, to imagine him as an abandoned spirit, wandering listlessly about Lisbon searching for the remaining vestiges of his creator, in the novel The Year of the Death of Ricardo Reis. 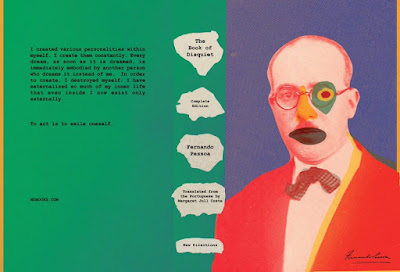 
Bernardo Soares, the book-keeper, is a prose-writing 'semi-heteronym,' principally responsible for perhaps his most famous work, The Book of Disquiet, first published in 1982, and subsequently edited and re-edited, translated and re-translated in a bewildering variety of versions, each (allegedly, at least) more 'complete' than the last.

Here's are some of the versions available in English:

There's also a bewildering range of kitschy Pessoa memorabilia in virtually every gift shop in Portugal: t-shirts, mugs, fridge magnets, tote-bags, and ... book-ends. The latter I found irresistible, I must confess: 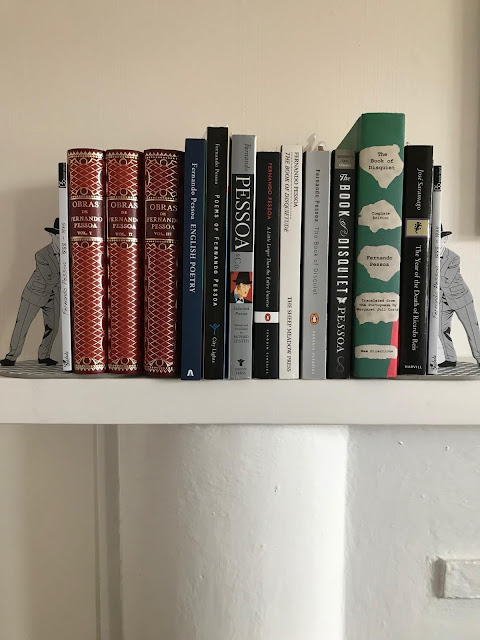 
And here's my own mini-collection of Pessoa-iana, in all its glory. You may notice a preponderance of translations by Richard Zenith, but he does have the (self-proclaimed) virtue of trying to make sure that his various selections from the poet's works do not overlap too substantially with one another (or even with other translator's selections). So even though you already own one of his books, you more or less have to buy the others. 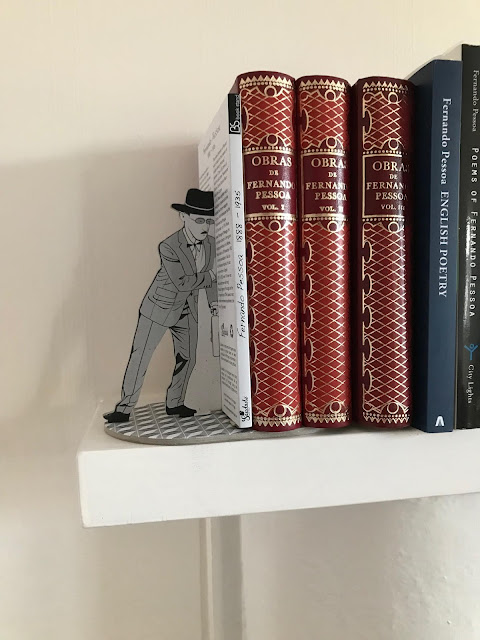 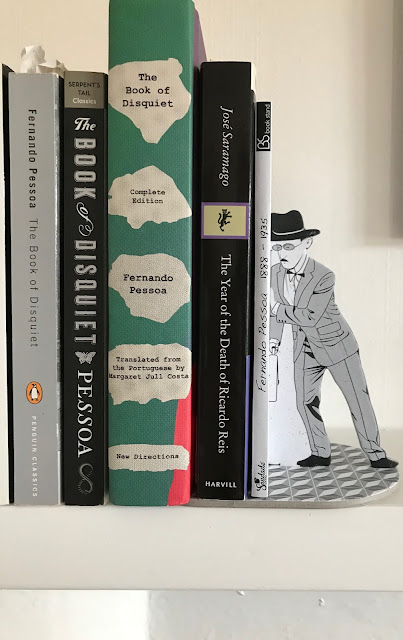 
So what does it all add up to, this brief excursus through the wonderful world of Fernando Pessoa? "If I could tell you, I would let you know" (to quote W. H. Auden). There's something delightful about his single-minded pursuit of multifarious fragmentedness, as well as in the way Portugal has decided to celebrate him as their greatest poet since the sixteenth-century epic bard Luís de Camões.

On the other hand, there's undoubtedly something depressing in the fact that all this acclaim surfaced only long after his death - and an unmistakable atmosphere of neglect and self-deluding monomania still seems to hang about his head despite it all. He's somewhat of a joke in 'serious' Portuguese literary circles, one local Academic confided to me at the short story conference to which I'd just contributed a paper entitled "Pessoa Down Under," about the local Australasian manifestations of his pervasive influence.

Joke or not, Pessoa is here to say. And if you don't think much of his poetry in translation, well, which writer is it that you're really judging? There are enough of them in there for anyone, I would have thought, and enough collected works to last us till the cows - or, in this case, sheep - come home. 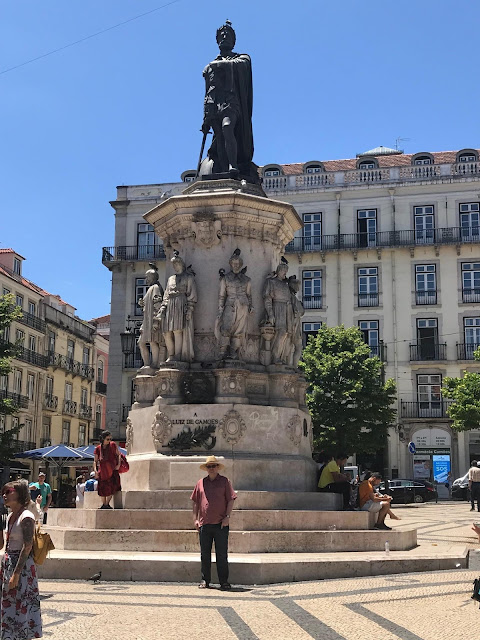 A joke, Jack? What kind of joke? Shaggy dog story?

Any idea where I can order a pair of those Pessoa bookends from?

Well, I bought them from the shop inside the Pessoa House, so it's possible you could get them from there. Here's their website address:
https://www.casafernandopessoa.pt/en/cfp/house