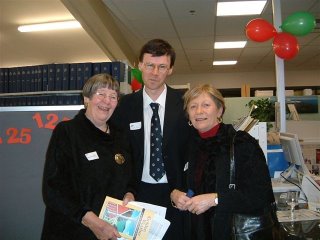 "There's no such thing as a free launch"
-- Murray Edmond (attrib.)
I guess it's probably one of those old adages like "prise the gun from my cold, dead fingers" which endlessly migrates from speaker to speaker, but there's nevertheless a fair amount of truth in it.

As time goes by, you begin to learn the rules, however idealistic you were going in: always site the book-table near the exit (so that no-one can escape bookless without running the gauntlet of your reproachful gaze); never stint on food and drink (especially the latter-- you want to induce a false sense of euphoria in your guests); don't let the speeches go on too long; and (if possible) include a musician or a juggler or something novel to liven things up; only invite people who are likely to buy the book (that rules out the very rich and the very poor: too canny and too needy respectively).

It's with a certain amount of horror that I realise that the recent Classic Poets booklaunch was actually my thirteenth -- hence the melodramatic title of this post (I guess I was thinking of that old Dr Seuss film The 5,000 Fingers of Dr T; or else maybe The Nine Gates of the Land of Shadow, that Satanic tract in the Roman Polanski film The Ninth Gate, which damns everyone who looks at it to eternal perdition ...)

So here they are, in reverse order of occurrence:

I guess my main impression, looking at this line-up, is to marvel at the number of people who've helped me and my collaborators out over the years. I mean, I have tried to do my bit to reciprocate, but it doesn't make nearly such an impressive list:

I suppose they can be quite fun sometimes -- meeting your pals, scarfing bread & cheese, making sure you're next to the drinks table when the speeches begin ... next time you go to one, though, do remember that you are expected at least to consider buying the book. Otherwise it's a bit like spending all afternoon tasting fine vintages at the vineyard and then rolling off without having purchased a single bottle -- it can be done, but it is a little gauche.

Really, though, I just want to put on record my thanks to all of you excellent people who have taken the trouble to come along on these many, many occasions. I guess your true reward will have to be postponed till you reach the next world, because it's unlikely to come in this one. I hope you take some satisfaction in knowing that you truly are the salt of the earth ...