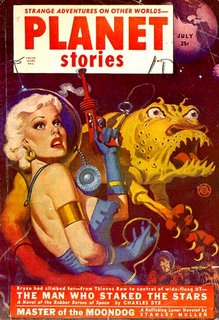 Planet Stories (July 1952) -- Philip K. Dick's first published story, "Beyond Lies the Wub" appeared in this issue (though it isn't mentioned on the cover ... I take it that lobster thing is meant to be a moondog rather than a wub).

When Tina Shaw and I were kicking around suggestions for a book we could do together last year, one of the ideas that came up was for an historical anthology of New Zealand Science Fiction. In fact, we ended up editing a collection of contemporary stories about myth instead (due out from Reed in late 2006 -- watch this space), but it still seems to me quite an interesting project.

Now John Dolan writes to say that he's writing an essay on what has (inevitably), to be called NZSF. I don't in the least grudge him his priority. In fact, I'm very curious to see what he makes of it. I hope he's not too unkind to them, though, our pioneering SF writers -- they are, after all, "ours, by God, / peculiarly by virtue of whatever was / held in common with other colonies." (Kendrick Smithyman, "Research Project").

Yes, I mean, how different can a specifically New Zealand SF actually be? Ours ... by virtue of whatever was held in common with other -- in this case pulpy scribblers about Androids and Rockets and Mars and the Future and Alternate History, etc. etc.

I don't know. It would have been interesting to speculate about it. My first impression is that SF has always had slightly more of a high culture cachet in NZ than elsewhere. A surprising number of so-called "serious" writers have tried their hand at it here. I drew up a list of the ones who were most interesting to me at the time, though it could undoubtedly be updated and expanded:

My introductory essay didn't really get very far. To be honest, I'm really more interested in trying to write Science Fiction than in writing about it. I suppose I hoped that the two interests might fruitfully overlap -- hence my opening question:

Night in the City:
Strange Days in NZ sf

I'm still very interested in that Phil Dick prescription for how to write a novel, but wresting it around to a discussion of specifically NZ themes was undoubtedly going to be a bit of a chore. So I had go at a different kind of beginning to the essay ...

.... And so on to talk about Mike Johnson's Lear, Phillip Mann's Pioneers, and a few other eccentric (and therefore strangely characteristic) NZ SF classics.

Well, that's as far as I got with the idea, anyway. It's interesting how many of these writers have been transplanted Brits, for one thing ... Anyway, over to you, John.