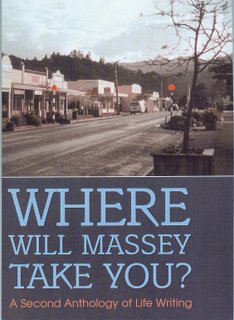 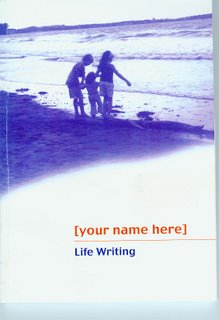 Yesterday Dr Mary Paul, Xiaoping Wang and I were interviewed by Ling-Ling Liang of World TV for her Chinese-language news programme (available, she told us, on Sky Channel 10). The subject? The Life Writing course Mary and I teach at Massey Albany. We've been getting quite a lot of publicity for it lately.

Ling-Ling's interest was specifically in the various International students who have taken or are taking the course. There were three Chinese students in the class this semester alone (including Xiaoping), and in the past we've had many others, as well as people from a plethora of other countries: Russia, South Africa, Yugoslavia, Zimbabwe, and so on. It's been running for six years now, since 2001.

The course has three major parts: there's an anthology of readings, which are discussed and analysed in the weekly lectures; there are two-hour workshops, where students read out and critique a series of prescribed writing exercises; and there are the assignments: a reading journal, a selection from each students' completed exercises, and the final assignment -- a ten-page piece on any subject (biographical, autobiographical, genealogical, even fictional ...) in virtually any genre (verse, prose, interview, script, video, album ...)

It's a creative writing course, then, but also a vehicle for the Academic study of the various ways in which people use their own lives (or the lives of others) as raw material. What we do in teaching it is discuss the pragmatic implications of certain technical writing choices. Any story, true or false, needs to be told -- it's how best to tell it we can help with most. Beyond that, a large part of the pleasure of the course lies in sitting back and listening. It's amazing how well you can get to know a person simply by hearing some of their stories.

So far we've published two anthologies of work generated by the course: [your name here] (2003), and Where Will Massey Take You? (2005). A third is now in preparation. They're available from the School of Social and Cultural Studies at the (to my mind very reasonable) price of $10 each.

So if you're interested in exploring some of the ramifications of your own life story, or the life stories of people close to you, why not begin by doing our paper? It's a stage two English paper, but there are no specific prerequisites, and you won't have to submit a portfolio of work in advance. The more the merrier, so far as we're concerned -- the more diverse points of view and backgrounds the more we'll all end up learning.

I'll end with a passage from Nathan Calvert's interview with Farid Shafizadeh Dizaji, a young Iranian immigrant to New Zealand:

Did you know when you talk with a bad intention,
Every word in your mouth is a lethal weapon?
– Lethal Weapon (written 03/05)

… He grabbed me by the throat and I grabbed him by the throat and I had a crowbar in my back pocket and, um, I started hooking him and then all my friends started beating him up too, and the police officer he had no partner, no nothing, and then I grabbed my crowbar and hit him in the face and then he got knocked out and we were all just stomping him down and, um, yeah, and then we just gapped it and jumped in the car and rushed off while we left him bleeding, and left him injured really bad.

... and then about nine cop cars arrived on the scene and we all got arrested. That cop that we assaulted came as well and he said, “Yep, this is them.” From then we got arrested, went to court, no, went to jail, Takapuna cells, got fingerprinted. Got like, you know, got pretty hits in the cells too from other cops for hitting the other cop. But that was all good, we couldn’t do nothing, there was thousands of them, um, we just stayed there and took it. And then we got bailed, like, four hours later and then we just, yeah, and that was it. That’s how the incident happened.

Nathan: So what’s happening now? Have those actions had consequences after the event?

Farid: Well, I’m sure they do, but I haven’t really met them yet. What has happened is they’ve made me go to court and at first I didn’t wanna plead guilty because the way I was treated. I didn’t feel I was treated like a normal human being, a normal citizen. In New Zealand. I have a New Zealand citizenship. And I don’t think no-one should treat me the wrong way because I’m from somewhere else. They should treat me the same because I treat everybody else the same. No matter where they are, I treat them like brothers. But, um, so I pleaded not guilty, so they held my court case for a month, no, I think it was two weeks, to go back to court. And then they told me to write a letter, why I believe, why I plead not guilty.

It's no excuse, I guess (nor would Farid and Nathan see it as such), but the policeman Farid assaulted referred to him and his friends as "mongrels."