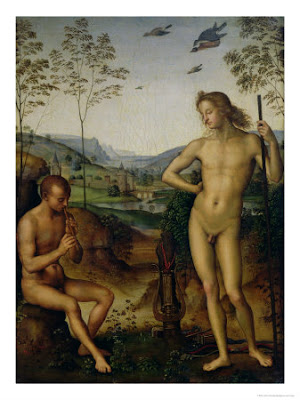 from "The Flaying of Marsyas"

A bright clearing. Sun among the leaves,
sifting down to dapple the soft ground, and rest
a gilded bar against the muted flanks of trees.
In the flittering green light the glade
listens in and breathes.

A wooden pail; some pegs, a coil of wire;
a bundle of steel flensing knives.

Spreadeagled between two pines,
hooked at each hoof to the higher branches,
tied to the root by the hands, flagged
as his own white cross,
the satyr Marsyas hangs.


2
Let’s have a look at you, then.
Bit scrawny for a satyr,
all skin and whipcord, is it?
Soon find out.
So, think you can turn up with your stag-bones
and outplay Lord Apollo?

This’ll learn you. Fleece the fucker.
Sternum to groin.Tickle, does it? Fucking bastard,
coming down here with your dirty ways ...
Armpit to wrist, both sides.Chasing our women ...
Fine cuts round hoof and hand and neck.Can’t even speak the language proper.
Transverse from umbilicus to iliac crest,
half-circling the waist.Jesus. You fucking stink, you do.
Hock to groin, groin to hock.That’s your inside leg done:
no more rutting for you, cunt.

Now. One of you on each side.
Blade along the bone, find the tendon,
nick it and peel, nice and slow.
A bit of shirt-lifting, now, to purge him,
pull his wool over his eyes
and show him Lord Apollo’s rapture;
pelt on one tree, him on another:
The inner man revealed. 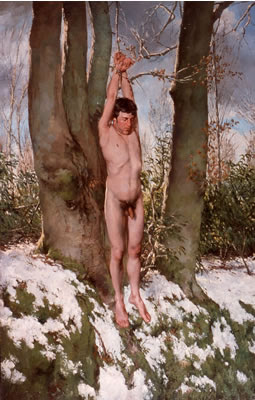 I flipped the tissue-paper and took in the Christian
iconography.
Its daguerreotype-like, braille feel. The spiky instruments.
The pincers.
The man who’d invented the saw had studied the anatomy
of a
Fish’s spine. From bronze he cut the teeth and tried them
out on a boxwood tree.

That ancient boxwood flute of Greece will haunt him yet.
Through olive groves
Its purple aura bleats through dark and sheep. The dozing
shepherd
With his flute abandoned. Wrapped up in his mantle,
independent, fast asleep.

Fletcher cut the nib of a quill with a Stanley knife
and sliced the palp
Of his finger off. It quivered with its hinge of skin,
then rivuleted
On the parchment. He didn’t know where it was going.
It obscured
The nice calligraphy that looked definitive: like a
Proclamation or a Treaty.

In fact, he’d been trying to copy the Inquit page off
the Book
Of Kells, as if it were a series of ‘unquotes’. The way
you’d disengage
The lashes of a feather, then try and put them back together.

The place was packed with expectant academics, but my
marking slips
Had flittered away from the text. They’d been Rizla papers
in another
Incarnation, when I’d rolled a smoke between my thumbs
and fingers, teasing
Out the strands. I waffled on about the stet-detectors
in the library

Basement, security requirements, conduits, wiring,
laminates and ducts.
Up above, the floors and stacks and filing systems, the
elaborate
Machinery of books, where I materialized. I strummed
their rigid spiny gamut.

There’s a shelf of Metamorphoses. Commentaries. Lives.
The Mystery of Ovid’s
Exile. This is where the Phrygian mode returns, by way
of an Australian stamp
That’s slipped out from the covers, bearing the unlikely-
looking lyre-shaped
Tail of the lyre-bird. Printed in intaglio, it’s playing
a barcarole.

I think of it as clinker-built, Aeolian, floating down
the limpid river which –
Said Ovid’s people – sprang from all the tears the
country fauns and nymphs
And shepherds wept in Phrygia, as they mourned their
friend the fettered satyr. 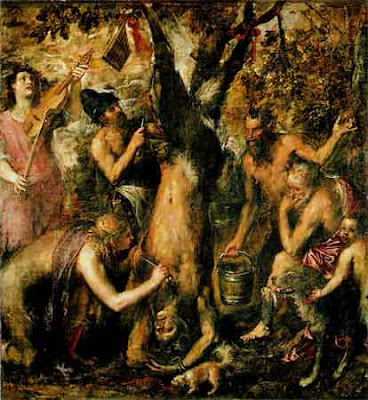 That's why I like this compilation so much. It's hit-and-miss, admittedly. There are some tiresome adaptations which whinge on and on for pages, but mostly they're distinct hits, I'd have to say.

It's great to have these two versions of the story of Marsyas to put side by side. The Robin Robertson piece is terrifyingly brutal: a couple of executioners joking like Shakespearean bullies as they divide up the carcase of this untermensch:

A man dismantled, a tatterdemalion
torn to steak and rind,
a disappointing pentimento
or the toy that can’t be reassembled
by the boy Apollo, raptor, vivisector.

Robertson is alert to the possibilties of medieval idealisation of the innocent songster Marsyas as a kind of proto-Christ, too:

Marsyas the martyr, a god’s fetish,
hangs from the tree like bad fruit.

I particularly like that last echo of the Billie Holiday classic "Strange Fruit," about lynch law in the Deep South:


Yet when we turn to Ciaran Carson, the poet of modern Belfast, we immediately become aware of a world of possibilites scarcely hinted at in the Scot Robertson's vicious little poem.

Carson makes a series of exploratory incisions into the body of the Marsyas story, seeing it in the fish-spine of a ringbound academic monograph, in an Irish postage stamp, in the tail of an Australian lyre-bird (hence, presumably, his title: "Down Under").

LIke a classical composer, he begins by stating the theme:


Then they told the story of the satyr who played the flute
so brilliantly
In Phrygia, he tried to beat Apollo. Apollo won, of course;
for extra measure, thought
He’d bring the satyr down another peg or two: stripped
off his pelt, ungloving it from

Scalpwards down. And could he play then? With his fingertips
all raw,
His everything all peeled and skinless? You saw the score
of veins
Externalized, the palpitating circuits. The polythene-like
arteries. The pulsing bag
Of guts you’d think might play a tune, if you could bring
yourself to blow and squeeze it.

Carson's ending is more vicious, even, than Robertson's. The cruelty of the gods is an immutable principle in the world of this poem, the world (one is tempted to say) of the Troubles:


So they tell their stories, of the cruelty of gods and
words and music.
The fledglings of the lyre-bird’s song. Its arrows.
They stare into
The water – ‘clearest in that Realme’ – and see the
fishes shingled,

Shivered, scalloped on the pebbles. The arrows of the
wind upon the water,
Written on the water; rolled like smoke, the fluted
breath that strolls
At midnight. They gaze into the stream’s cold pastoral,
seeing
Fossil ribs and saws embedded there, the flute player’s
outstretched fingers.


Stephen Dobyns retells the story of the flaying of Marsyas too, in his terrifyingly deadpan collection Cemetery Nights (1987). His Marsyas is a kind of hapless hippie goof, unable to resist the flattery of the crowd, even though he knows where it'll lead him in the end.

Perhaps that's the point of the story, in fact: bad things happen to nice people. Beware the radiance of the god Apollo, too: there's no room for clumsy emotions like mercy or forgiveness in the searchlight of his dispassionate intellect. He'll rationalise you as soon as look at you.

A little like the god Augustus with that nosey little gadfly Ovidius, in fact.
Posted by Dr Jack Ross at 1:47 pm