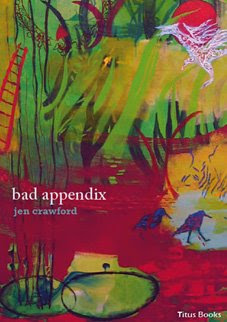 Well, a good time seems to have been had by all at the big Titus booklaunch in K Rd last night. It was wonderful to see so many old friends, and to meet some new ones, too.

My novel EMO was introduced eloquently and insightfully (in my humble opinion, at any rate) by Jen Crawford. Then it was my turn to introduce her book bad appendix. This is what I had to say about Jen's poetry:

I guess there might once have been a time when one could say that so-and-so was predominantly a “love poet” or a “landscape poet” – or , for that matter, a “metaphysical poet.” There's a lot of evocation of places (both in Australia and New Zealand) in Jen Crawford's poems, yet the more distinctly they're delineated, the more obvious it is that she's referencing the landscape of the soul.

I walked along electrolytic street
and beyond the shadow of the stack
found broken cricks and patchy light,
mottled-leaf roses
and the stumps of old walls.
I lay down and gravel
pressed into my cheek.
beetles ran over my arms.

There’s a kind of directness about that which seems reminiscent of Blake’s “London”:

I wander thro’ each charter’d street
Near where the charter’d Thames does flow
And mark in every face I meet
Marks of weakness, marks of woe

Or, perhaps more to the point, his “The Garden of Love”:

That word “electrolytic” is particularly interesting – it sounds a bit like “epileptic” to me – as if it’s a very hot day and people are jittery, about to jump out of their skins. Here, though, it’s the street which is electrolytic, “capable of conducting an electric current” (as one dictionary definition has it), or, alternatively, conducive to electrolysis, that process of using electric currents to promote a chemical reaction. In this case (presumably), the electricity of human feeling and emotion transforming the solid landscape the poet sees: the stack, the cricks, the roses, the stumps of old walls, into the stuff of life.

I lay down and gravel
pressed into my cheek.

That’s a somewhat childish pose, perhaps – appropriate for the site of a primary school, that arena where emotions can run truly unrestrained. We can imagine the bitter tears, or (possibly) the ache of their absence, without their even having to be mentioned.

“Beetles ran over my arms” is, again, in this context, appropriate to the pettifogging, mind-numbing rituals of a primary school” “binding with briars my joys and desires.”

The poem continues with description of what is really no more than a walk through a landscape:

from here roads lead
out to the station, to the dunes,
the ankle-deep pool,
the mild veneer lake

But even that simple list of destinations sounds somehow ominous – as if each choice of direction were an existential decision. “The station:” getting the hell out of here, perhaps; “the mild veneer lake:” a more complete solution.

The journey actually culminates, though, in:

… the doorway of a pub
where in the beery cool a sparrow hunches,
watching not moving,
& when I step too close
doesn’t fly

It would sound cheesy, Wordsworthian, to talk about this as the “poet receiving comfort from natural phenomena” – the little bird which doesn’t fly away from her – but isn’t that what it is? Isn’t that what really happens sometimes? Maybe the pathetic fallacy isn’t such a fallacy after all? If, that is, one is honest about what it actually means – not that nature really does “sorrow for the son [or daughter] she bore,” (as A. E. Housman put it) but that our minds are naturally geared to interpret things that way.

There’s nothing cheesy about the expression of this poem, that’s the point. and one has to work pretty hard to get much detail from it. What is apparent at once (I’d say) to any reader is the mood of the poem – I doubt that anyone could follow Jen Crawford through this “electrolytic” landscape without getting a sense of anticipation, almost of dread.

The tone of Jen Crawford’s poetry is not polite and detached, not wryly observant and full of witty instances – nor is it loose and sloppy, unrestrained and “emotional” (in the worst sense). She’s not a beat, but neither is she a LANGUAGE poet. She has a lot to say about the substance and texture of experience, and she expresses herself with deftness and restraint.

The more I read her poems, the more I see in them. I don’t think it’s any accident that she quotes from Gerard Manley Hopkins’ (so-called) “Terrible Sonnets” in her own poem called “terrible sonnet” [59]:

oh put me out of my fucken misery.

It’s a note which hasn’t been heard in our poetry for far too long. 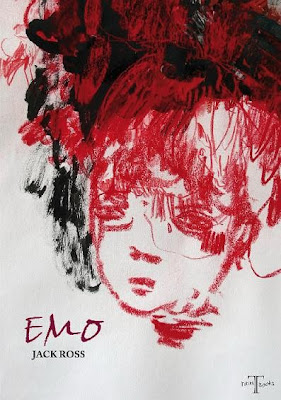 [cover image: Emma Smith, "have I been pardoned yet?" (detail)]

Check out Scott Hamilton's write-up of the occasion at Scoop Review of Books.
Posted by Dr Jack Ross at 9:22 am

The word "electrolytic" reminds me of Eliot's use of "ether" in "..etherised upon a table..." - I have actually been so - as boy many years ago. And one does experience an "overwhelming feeling" as one "goes under" - which is not so terrifying - at a deep level it is a kind of relief...

But in electronics an electrolytic capacitor is one that is active - that it is charged whereas a passive component is not activated only activated by say an incoming signal. Electrolysis refers to an electro-chemical process (as in metallic corrosion or in batteries etc). The street is thus "charged" (with excitement,'voltage', (chemistry even..?), thus potential, atmosphere etc whatever...)there is thus some language play, and of course great existential or personal intensity here. Sometimes on wet nights one can hear high voltage insulators oscillating or transformers humming etc but this is perhaps incidental.

The launch - the established writers (more or less) are very good (more than that) - but as to Jen Crawford her writing is certainly something very - I don't know - it immediately engaged me - I recall the first time I read a paragraph of something she wrote and I knew almost immediately it was that of a great writer (perhaps I should limit that overused word tho - perhaps "of the genre or sub genre she "inhabits").

I got a copy of all three books.

The Aleyluyah I dont like as a place though - it is rather dark and gloomy and echoing (so it was almost impossible to hear any of the readers except Bill Direen - but he sang) - they used to put a screen between readers and the road - that done it used to be more intimate and very good (at least better) for reading.

Peter is a very nice fellow of course but the venue is not good.

I agree the sound was poor on Thursday, but (as I recall) the screen used to work really well when we had Poetry Live up there in St Kevins Arcade.

The place is so atmospheric and attractive, though, that it always seems to add an extra cache to the whole event ...

Thanks for the extra information on electrolysis - wikipedia was not a very reliable guide this time ...

or do I mean cachet?

Jack - it was good when I used to be relaxed about being drunk - I was only so on Thursday as I used booze and tranquilisers that afternoon to get through a dental ordeal!

That said I have a kind of love-hate relationship with K-Road and the Alleluyah - scene of may "tragedies" and also some triumphs!

Cache might be the word - adds a kind of hiddeneness - hence perhaps a depth...

Talking of atmosphere - I wish that His Majesty's Arcade was still going - as a boy in the 60s used to go to the Auckland Chess Club there...hmm very Dickensian - a writer I had been reading since I was 11 or so I think ....they had these wonderful old tables with inlaid boards (they are still in existence but have been polished etc)and beautiful chess pieces (one set was of ivory but one day it was stolen holus bolus) and "many" characters" - the game attracts as many eccentric as poetry readings!! -

Years ago I recall going to one reading at the Globe (1968) and listening to
C K Stead and some young man....then I started reading at the Albion which was perfect for atmosphere...

You came across well but I couldn't hear Jen - but then I grow old I grow old ...hmm.... I am reading Bill's book - your book interesting - Jen's hard to get into at this point...will re-read...

The 1001 Nights thing ('disturbing' your "main text about robots!! - as well as the Universe...) reminds me of the marvelous experience of hearing Sinbad the Sailor read to me by my mother night after night - incredible...

Yes I was in the field of electronics etc [to be honest I wasn't really much good as a Tech - I used to get confused a lot!!] until 1987 - also communications, fibre optics, PCM (essential basically to the Internet but in use since the 70s at least) microwave systems etc but I was also "hands on" - digging holes for cable repair or pole placement, and crawling under houses ...

In fact I was also interested in the word "stack" Jen uses (probably coincidentally) as at Otahuhu power station and elsewhere they have things called "Capacitor stacks" which bring the 110,000 (or say 220 Kv) volts down to 110 so switches can be operated - these stacks are also used to (try to -I don't think they ever succeed) control or modulate real and unreal power!!!

And the number systems (real and unreal numbers) involved lead the "discovery" of whole new "universes" ... even by the 19th Century. (Especially after mathematician "proved" (contra Euclid) the possibility that parallel lines converged at infinity!

(Ideally they want the real power in the system! That drives heaters and lights etc but the unreal power is also "useful"!))

So electronics and science - as I think Brunton somehow knew of science in general - the more it is studied - gets more and more into the realm of the fantastic and the symbolic -hence perhaps the fascination many people have with Tessla - his systems worked - (almost)without him nothing would work - not even a toaster! ... but he was into a strange world of unseen waves - as strange as your cyborgs and Evas etc!! I have actually seen a Tessla coil - producing millions of volts - in action at the CIT in Upper Hutt - the "electricity" (as in Frankenstein movie) just jumped from it to my hand, holding an old light bulb, but I felt nothing - very low current...

"all those tiny infinities" !

thanks Richard & Jack. Some further comments (explanation!) on 'primary school' and electrolytic st on my blog.