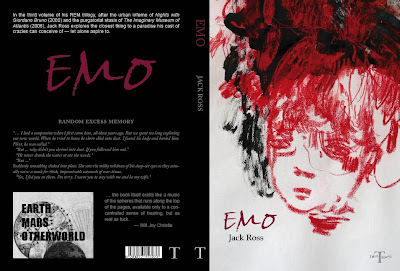 The latest Titus Books extravaganza will be at the Alleluya Cafe, St Kevin's Arcade, Karangahape Rd, on Thursday 19th June from 6.30 pm onwards.

The three books are: 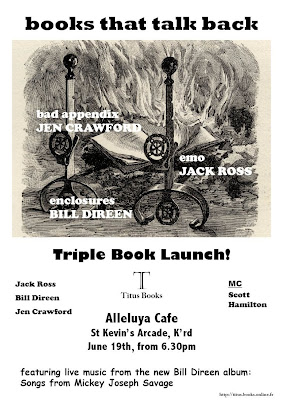 Jack Ross, EMO (novel)
I'm very happy to be in such distinguished company. Bill and I had a launch together in 2006 for our previous two Titus titles: my The Imaginary Museum of Atlantis and his Song of the Brakeman. Jen Crawford is a friend I've met more recently, and whose poetry I was proud to include in Landfall 214 (2007): 41-44. MC Scott Hamilton has already put up an interesting post about the event at Reading the Maps.

We'll all be doing our thing on the night: I'll be performing some dialogue from my novel with the lovely Bronwyn Lloyd, Jen will read some poems, and (probably the most potent lure) as well as giving a reading from his novel, Bill will also be playing songs from his latest album Songs for Mickey Joe in the course of the evening.

What can I say about EMO?

The original idea was to compile a blog-novel in the form of three sets of diary entries available online. The concept has grown a bit since then, though. Each page of text has ghost pages underneath it (still legible to the determined), as well as a main narrative by one of my three protagonists: Eva, Marlow and Ovid.

Does that sound complicated? I don't think it will present any real obstacles to readers of the two previous volumes in my R.E.M. [Random Excess memory] trilogy: Nights with Giordano Bruno (Bumper Books, 2000) or The Imaginary Museum of Atlantis (Titus Books, 2006).

I should emphasise, though, that EMO is an entirely stand-alone story, and does not require any knowledge of the other books in the series. I have to admit that parts of it have shocked some readers, but I don't think any of them have found it difficult to get into. On the contrary, it's only too compulsively - and disreputably - readable, as one of them remarked to me ...
Posted by Dr Jack Ross at 2:20 pm

btw Do you suffer from hypergraphia? You seem to have a new book out every couple of months, and we're not talking 'Spot Goes to the Ballpark' either. We are both lime green with envy.

Actually it's mainly a coincidence that so many projects are converging on the first half of this year: EMO is the one that matters most to me, but there's also the third of our AUP audio / text poetry anthologies, the third of the Massey Life Writing anthologies, and of course our Orange Roughy fundraising book from Pania Press. I'm really hoping things quieten down a bit after this. People will start to feel that I'm mad for publicity or something!

I saw EMO tonight - I couldn't read it (light not good enough (for this 60 year old person) at Maps place) but it looks very interesting...I am interested in the layout and the crisscrossing fonts etc

If it is as good as 'Nights with Giodorno Bruno' it will be great.

I still stand by the two reviews of your books I did.

hooray! emerging from jetlag to find I'm greatly looking forward to this. see you soon!