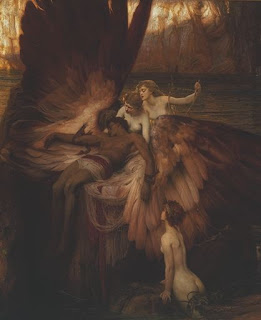 Weary of exile, hating Crete, his prison,
Old Daedalus grew homesick for his country
Far out of sight beyond his walls – the sea.
“Though Minos owns this island, rules the waves,
The skies are open: my direction’s clear.
Though he commands all else on earth below
His tyranny does not control the air.”
So Daedalus turned his mind to subtle craft,
An unknown art that seemed to outwit nature:
He placed a row of feathers in neat order,
Each longer than the one that came before it
Until the feathers traced an inclined plane
That cast a shadow like the ancient pipes
That shepherds played, each reed another step
Unequal to the next. With cord and wax
He fixed them smartly at one end and middle,
Then curved them till they looked like eagles’ wings.
And as he worked, boy Icarus stood near him,
His brilliant face lit up by his father’s skill.
He played at snatching feathers from the air
And sealing them with wax (nor did he know
How close to danger came his lightest touch);
And as the artist made his miracles
The artless boy was often in his way.
At last the wings were done and Daedalus
Slipped them across his shoulders for a test
And flapped them cautiously to keep his balance,
And for a moment glided into air.
He taught his son the trick and said, “Remember
To fly midway, for if you dip too low
The waves will weight your wings with thick saltwater,
And if you fly too high the flames of heaven
Will burn them from your sides. Then take your flight
Between the two. Your route is not toward Boötes
Nor Helice, nor where Orion swings
His naked sword. Steer where I lead the way.”
With this he gave instructions how to fly
And made a pair of wings to fit the boy.
Though his swift fingers were as deft as ever,
The old man’s face was wet with tears; he chattered
More fatherly advice on how to fly.
He kissed his son – and, as the future showed,
This was a last farewell – then he took off.
And as a bird who drifts down from her nest
Instructs her young to follow her in flight,
So Daedalus flapped wings to guide his son.
Far off, below them, some stray fisherman,
Attention startled from his bending rod,
Or a bland shepherd resting on his crook,
Or a dazed farmer leaning on his plough,
Glanced up to see the pair float through the sky,
And, taking them for gods, stood still in wonder.
They flew past Juno’s Samos on the left
And over Delos and the isle of Paros,
And on the right lay Lebinthus, Calymne,
A place made famous for its wealth in honey.
By this time Icarus began to feel the joy
Of beating wings in air and steered his course
Beyond his father’s lead: all the wide sky
Was there to tempt him as he steered toward heaven.
Meanwhile the heat of sun struck at his back
And where his wings were joined, sweet-smelling fluid
Ran hot that once was wax. His naked arms
Whirled into wind; his lips, still calling out
His father’s name, were gulfed in the dark sea.
And the unlucky man, no longer father,
Cried, “Icarus, where are you, Icarus,
Where are you hiding, Icarus, from me?”
Then as he called again, his eyes discovered
The boy’s torn wings washed on the climbing waves.
He damned his art, his wretched cleverness,
Rescued the body and placed it in a tomb,
And where it lies the land’s called Icarus. 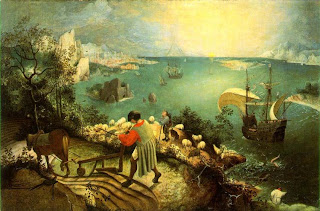 In Breughel’s Icarus, for instance: how everything turns away
Quite leisurely from the disaster; the ploughman may
Have heard the splash, the forsaken cry,
But for him it was not an important failure; the sun shone
As it had to on the white legs disappearing into the green
Water; and the expensive delicate ship that must have seen
Something amazing, a boy falling out of the sky,
had somewhere to get to and sailed calmly on.


It’s interesting to see just how carefully Breughel must have studied Ovid’s text before painting his famous picture. The fisherman, shepherd and farmer are all there, as is that breath-taking vista of the Greek islands, stretching off to a honey-bright horizon.

The emphases in Auden’s “Musee des Beaux-Arts” (1940) are of course quite different. He wants to praise Breughel’s psychological insight into basic human reactions to catastrophe. And it’s hard to avoid the conclusion that this must indeed have been in Breughel’s mind. Why else so deliberately decentre the main event?

And, given that the poem was written at the time of the phoney war, when only Poland seemed to be taking the brunt of Hitler's wrath, its hard not to see the ongoing validity of Auden's pessimism, also.

Curiously enough, Ovid’s text too goes on to add an extra frisson to his characterisation of Daedalus, the Frankenstein-like inventor of so many dubious devices and machines – from the bondage gear he designed for Queen Pasiphae, to the convoluted Panopticon he made to hide her monstrous offspring in.

As Daedalus gave his ill-starred son to earth,
A talking partridge in a swamp near by
Glanced up at him and with a cheerful noise
The creature clapped its wings. And this moment
The partridge was a new bird come to earth –
And a reminder, Daedalus, of crime.
For the inventor’s sister, ignorant
Of what the Fates had planned, sent him her son
A brilliant boy and scarcely twelve years old.
The boy studied the backbone of a fish;
This image in his mind, he made a saw
And was the first to bolt two arms of iron
In a loose joint: while one was held at rest,
The other traced a circle in the sand.
Daedalus, jealous of his nephew’s skill,
Murdered the child by tossing him head-first
Down the steep stairs that mount Minerva’s temple,
Then lied by saying the boy slipped and fell.
But Pallas, who rewards quick-witted creatures,
Restored him with the feathers of a bird,
Saved in midair. The quickness of his mind
Was in his wings and feet; he kept his name.
Even now the bird does not take wing too high,
Nor makes her nest in trees or up a cliff,
But claps her wings in shallow flight near earth;
Her eggs drop in thick brush, and not forgetting
Her ancient fall, she fears high resting regions. 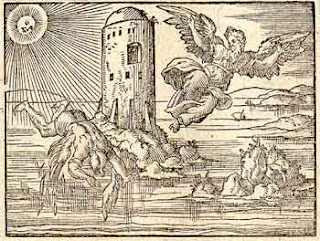 Horace Gregory’s blank-verse translation seems competent and well judged. A friend of Robert Lowell’s, and member of that Classics-infused generation of poets, he clearly saw it as essential to provide them with a Metamorphoses they could call their own (like Robert Fitzgerald’s 1961 Odyssey, his 1974 Iliad and – eventually – his 1983 Aeneid).

Certainly Lowell thought so. His comments (quoted on the backcover of my paperback Mentor Classics edition) are laudatory in the extreme. "It is the only literate and readable version I've come across," he says. "A large and wonderful job ... I'm sure I will be using it the rest of my life to return to the old stories."

A bit unkind to Rolfe Humphries, perhaps, but certainly nice for Gregory to hear such an accolade from the author of "Falling Asleep over the Aeneid."
Posted by Dr Jack Ross at 1:48 pm