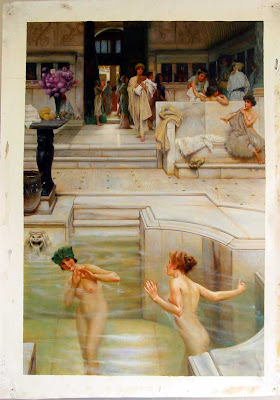 ... So ended
The story, and the Nereids went their ways
Swimming the peaceful waters. Scylla only,
Fearing the far-off deeps, came wandering back
To the shore, and there she strolled along, all naked
Over the thirsty sands, or, growing weary,
Found some safe pool to swim in. But here came Glaucus,
Sounding his shell across the sea, a dweller
New-come to ocean: change had come upon him,
NOt so long since, near Anthedon, in Euboea.
He saw her, and he loved her, and he said
Whatever words might make her pause to listen,
But she was frightened, and fled, and swift in her fear
Raced to the top of a mountain that hung over
The shore, one sharp high peak, whose shadow fell
Far over the water. Here she was safe, and watched him,
Monster or god, wondering at his color,
The hair that fell across his back and shoulders,
The fish-form fig-leaf at his groin. He saw her,
Leaned on a nearby mass of rock, called to her: “Maiden,
I am no freak, no savage beast, I am
A sea-god; neither Proteus nor Triton
Nor Athamas’ son Palaemon, none of these
Has greater power than I. I once was mortal,
But even then devoted to deep waters
From which I earned my living. Thence I drew
My nets, or by the ocean side I dangled
My rod and line. I can recall a shore
That bordered on green meadows, which no cattle,
No sheep, no goats, had ever grazed, no bees
Came there for honey, and no garlands ever
Were gathered there, nor sickle plied. I first
Came there and dried my nets and lines and spread them
Along that bank, counting the fish I caught
By luck or management or their own folly.
It will sound to you, no doubt, like a fishy story,
But why should I tell you lies? – My catch, on touching
The grass, began to stir, to turn, to swim,
To jump on the land the way they did in the water.
And as I stood in wonder, they slipped down
Into their native element, and left me.
I was a long time wondering: had some god
Done this, or was there magic in the grasses?
I plucked a blade and chewed it, and its flavour
Had hardly touched my tongue, when suddenly
My heart within me trembled, and I felt
An overwhelming longing: I must change
My way of life. I could not stand against it,
‘Farewell, O Earth!’ I cried, ‘Farewell forever!’
And plunged into the sea, whose gods received me
With every honor, and called on Oceanus
And Tethys, to dissolve my mortal nature.
They purged me of it, first with magic singing,
Nine times repeated, then with river water
Come from a hundred streams, and I remember
No more, but when my sense returned I knew I was
A different kind of creature, body and spirit.
I saw, for the first time, this beard, dark-green,
These locks that flow behind me over long waves,
These shoulders and blue arms, these legs that trail
Into a fish-like end, and all of this
Of little good to me. Where is the profit
In being a sea-gods’ sea-god, if my Scylla
Cares not at all?’’ There was more he would have spoken,
But Scylla fled once more, and he, in anger,
Went to the marvellous palace-halls of Circe,
The daughter of the Sun. 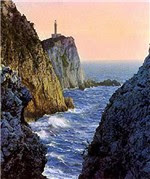 Why, why, oh why, another one of these stories where a nymph or goddess is surprised naked by a god or lustful monster, and pursued until she's transformed into soemthing else? Persephone and Hades, Arethusa and Alpheus, Daphne and Apollo, Zeus and ... well, name your candidate: Semele, Io, Europa etc. etc.

What was it Ovid meant to say by relating so many of them? Glaucus gets an unusually long time to put his case, this time. His lovesickness seems to be treated more sympathetically than, say, Apollo's. And yet there's a basic monotony to the situation which makes it difficult to save - in narrative terms. The mythological equivalent of a Soap Opera cliche.

The story goes on to tell us, after the piece quoted above, how Glaucus went to ask Circe for a love potion. Circe promptly fell for him herself and, when he scorned her in favour of Scylla, poisoned the pool her rival was bathing in and transformed her into a monster.

Circe, in the Odyssey, is adept at showing sailors their true, animal selves. Is that the point of her transformation of Scylla? That one who rejects so faithful a suitor simply because he looks a bit fishy, is a monster of ingratitude? Certainly Glaucus was generally seen as a fairly benevolent water deity, coming to the aid of drowning sailors in storms, having once been one himself.

As usual in Ovid, in the Metamorphoses as a whole, there's a curious fusion between human psychology and the impersonal processes of Nature. The stories constantly veer from one level to the other, as in his earlier set of Love Letters from Abandoned Heroines.

It's a curious kind of sentimentality, like Sterne's in The Sentimental Journey, feeling for birds in cages, but getting his real entertainment from indulging in feeling, rather than plotting any concrete remedies for injustice. Perhaps it's typical of a hierarchical slave society, where the concept that some human beings are inferior to others is an inescapable reality. 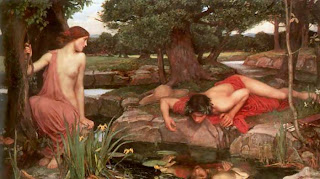