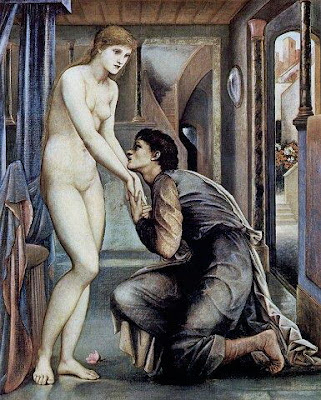 “Pygmalion observed how these women lived lives of sordid
indecency, and, dismayed by the numerous defects
of character Nature had given the feminine spirit,
stayed as a bachelor, having no female companion.

“During that time he created an ivory statue,
a work of most marvellous art, and gave it a figure
better than any living woman could boast of,
and promptly conceived a passion for his own creation.
You would have thought it alive, so like a real maiden
that only its natural modesty kept it from moving:
art concealed artfulness. Pygmalion gazed in amazement,
burning with love for what was in likeness a body.

“Often he stretched forth a hand to touch his creation,
attempting to settle the issue: was it a body,
or was it – this he would not yet concede – a mere statue?
He gives it kisses, and they are returned, he imagines;
now he addresses and now he caresses it, feeling
his fingers sink into its warm, pliant flesh, and
fears he will leave blue bruises all over its body;
he seeks to win its affections with words and with presents
pleasing to girls, such as seashells and pebbles, tame birds,
armloads of flowers in thousands of different colors,
lilies, bright painted balls, curious insects in amber;
he dresses it up and puts diamond rings on its fingers,
gives it a necklace, a lacy brassiere and pearl earrings,
and even though all such adornments truly become her,
she does not seem to be any less beautiful naked.
He lays her down on a bed with a bright purple cover
and calls her his bedmate and slips a few soft, downy pillows
under her head as though she were able to feel them.

“The holiday honoring Venus has come, and all Cyprus
turns out to celebrate; heifers with gilded horns buckle
under the deathblow and incense soars up in thick clouds;
having already brought his own gift to the altar,
Pygmalion stood by and offered this fainthearted prayer:
'If you in heaven are able to give us whatever
we ask for, then I would like as my wife –' and not daring
to say, '– my ivory maiden,' said, '– one like my statue!'
Since golden Venus was present there at her altar,
she knew what he wanted to ask for, and as a good omen,
three times the flames soared and leapt right up to the heavens.

“Once home, he went straight to the replica of his sweetheart,
threw himself down on the couch and repeatedly kissed her;
she seemed to grow warm and so he repeated the action,
kissing her lips and exciting her breasts with both hands.
Aroused, the ivory softened and, losing its stiffness,
yielded, submitting to his caress as wax softens
when it is warmed by the sun, and handled by fingers,
takes on many forms, and by being used, becomes useful.
Amazed, he rejoices, then doubts, then fears he's mistaken,
while again and again he touches on what he has prayed for.
She is alive! And her veins leap under his fingers!

“You can believe that Pygmalion offered the goddess
his thanks in a torrent of speech, once again kissing
those lips that were not untrue; that she felt his kisses,
and timidly blushing, she opened her eyes to the sunlight,
and at the same time, first looked on her lover and heaven!
The goddess attended the wedding since she had arranged it,
and before the ninth moon had come to its crescent, a daughter
was born to them – Paphos, who gave her own name to the island. 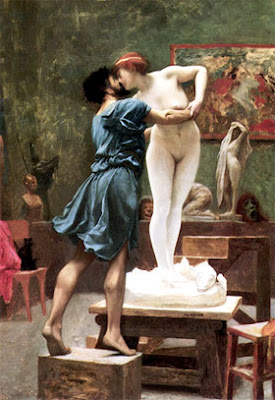 ... blank verse it has been, for the most part. There are a few passages where I have departed from its rule ... Ovid ... turns from the imitation of conversation [in Book V] to the imitation of poetry in the tenth and fifteenth books of his poem. In Book V, it is the song of the Muse Calliope; in Book X, it is the songs of her son, Orpheus; and in Book XV, it is the long, inspired (so he says) monologue of the philosoopher Pythagoras ... All three figures are related: Calliope and Orpheus are mother and son, and Pythagoras is bound to them by his habit of writing in verse and by the emphasis that Pythagorean thought placed on the importance of music. Whether Ovid is using these figures to signal that his epic of fifteen books can be structurally divided into three equal parts, I cannnot say: Ovid is very skillful at playing with our structural expectations. However, because of the relationship between these speakers, and because they are all speaking poetry, as it were, I have used the same meter for all three of them

Indeed, some might think that Martin's translation is somewhat over-introduced. It begins with a long piece by Bernard Knox (reprinted from the New York Review of Books) explaining why Martin is so much more satisfactory as a translator than either Ted Hughes or David R. Slavitt. Martin then contributes his own nine-page "Note," and concludes with 40 pages of notes and glossaries at the back.

I guess the reason for reprinting Knox's piece, though, was because he'd also written introductions for Robert Fagle's phenomenally-successful translations of the Iliad and Odyssey, and Martin's publishers wanted to imply that this was to be regarded as a similarly standard work. Who knows? In any case, Martin's choices seem, by and large, sensible and well thought-through, and while there's no particular distinction in his blank verse to set it apart from A. D. Melville or Rolfe Humphries or Horace Gregory or any of the other toilers in the vineyard who've employed that metre, I fell that there's an extra zest to these rough five-beat lines in a kind of modified version of G. M. Hopkins' sprung rhythm. They look like hexameters, but they're not - not really. They seem to accommodate more elaboration than a lot of the rest of his version, though. And what of the story itself? Martin brings out, I think, just how sensual an awakening Pygamlion's ivory lover undergoes: "... he went straight to the replica of his sweetheart,/ threw himself down on the couch and repeatedly kissed her; / she seemed to grow warm and so he repeated the action, / kissing her lips and exciting her breasts with both hands ..."

Ovid is obviously playing here with the idea of the sun bringing forth life, like crocodiles being formed from the Nile's mud - a belief which persisted in Europe until the eighteenth century. And yet he also succeeds in sounding faintly ironic:

Aroused, the ivory softened and, losing its stiffness,
yielded, submitting to his caress as wax softens
when it is warmed by the sun, and handled by fingers,
takes on many forms, and by being used, becomes useful.


Is that Martin's choice of tone, or Ovid's, I wonder? It comes down to yet another example of that intense modernity we feel in Golden Age Latin poets such as Catullus and Ovid. And yet, in attributing to them a kind of hip, street-wise consciousness, are we eliding over a hundred more significant points of difference?

Never mind. I guess it's better to feel a kinship with poets from the distant past than to hear them as pompous reminders of the mutabliity of any advanced culture ...

Charles Martin gets a definite thumbs-up, I feel - alert to the subtleties of his poet's changes of mood and style - and a good serviceable poetic voice of his own. Perhaps it's no accident that Pygmalion is so foregrounded by him. Isn't every translator's desire to breathe life into his own hand-carved replica of an otherwise unattainable original?
Posted by Dr Jack Ross at 1:49 pm